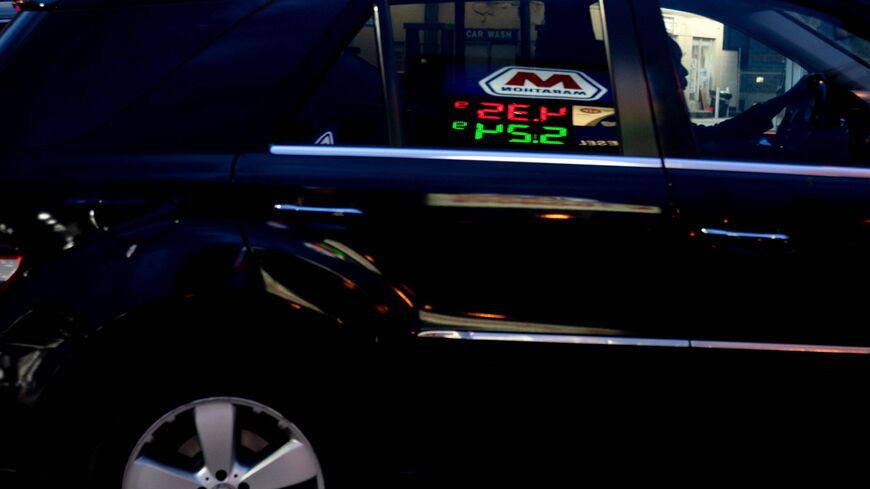 A sign displaying the price of gas at a Marathon gas station is reflected in the window of a vehicle in Washington, DC, on March 31, 2022. - STEFANI REYNOLDS/AFP via Getty Images

President Joe Biden said Thursday the purpose of his upcoming trip to Saudi Arabia is not persuading the kingdom to boost oil output, but he has encouraged the Gulf region more broadly to help calm energy markets roiled by Russia’s war in Ukraine.

“No, I’m not going to ask them,” Biden told a news conference in Madrid. “All the Gulf states are meeting. I've indicated to them that I thought they should be increasing oil production generically, not to the Saudis, particularly."

Biden will visit the Middle East for the first time as president July 13-16. Following stops in Israel and the West Bank, Biden will fly directly to the Saudi coastal city of Jeddah to attend a summit of nine leaders from the Gulf Cooperation Council plus Egypt, Iraq and Jordan.

Biden said he would meet with Saudi King Salman bin Abdul-Aziz Al Saud and the crown prince, Mohammed bin Salman, as “part of a much larger meeting.”

Why it matters: The Biden administration has emphasized that the Saudi leg of his Middle East tour will include a meeting with Gulf leaders and not just the crown prince, who US intelligence says approved the murder of Washington Post journalist Jamal Khashoggi.

During the campaign, Biden pledged to make Saudi Arabia a “pariah” on the world stage for its human rights record. But oil prices have surged in recent months, putting pressure on Biden to engage with Saudi Arabia, one of the world’s largest oil producers.

US officials, however, insist the trip isn’t purely about getting Saudi Arabia to pump more oil. White House Press Secretary Karine Jean-Pierre said viewing the trip as “only about oil” would be “simply wrong.”

Ahead of Biden’s visit, the Saudi-led Organization of the Petroleum Exporting Countries (OPEC) and its partners announced output hikes for July and August. On Thursday, OPEC+ confirmed that it would stick with the production plans for August but made no decision on September.

What’s next: Biden said Thursday the purpose of his trip is also to “deepen Israel’s integration into the region.” The Biden administration has sought to build on the Abraham Accords, which normalized ties between Israel and several Arab states in 2020.

Most analysts believe it’s unlikely that Saudi Arabia is next in line. However, the administration is said to be drawing up a “road map for normalization” between Israel and Saudi Arabia, Axios reports.

Know more: In the latest “On The Middle East” podcast, Daniel Shapiro, former US Ambassador to Israel, discusses the prospects for Saudi-Israeli normalization and what to expect from the presidential trip.