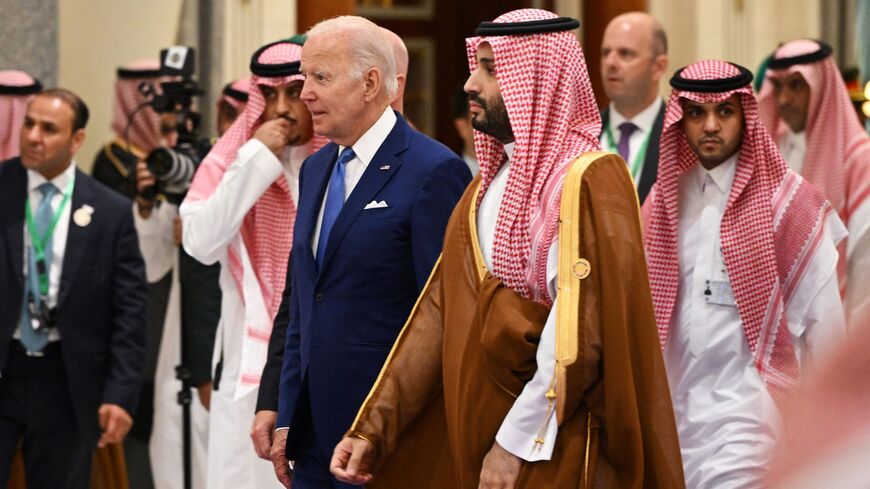 Biden came into office planning to shun the kingdom for its human rights abuses and the 2018 murder of columnist Jamal Khashoggi.

With his trip to Jeddah, however, Biden sought to balance his campaign promise of a values-driven foreign policy with strategic concerns in the Middle East, soaring oil prices at home and his goal of countering Russia, China and Iran.

Missing the mark?  If those were his aims, Biden’s critics say he fell short. “The question is, is what he got consequential? And did he pay any price for getting it?” said Aaron David Miller, a senior fellow at the Carnegie Endowment for International Peace.

The White House had tried to downplay the chances for an accommodation from Riyadh on energy, but the expectations were still there, given historically high gas prices. And, as most expected, there were no commitments from Saudi Arabia on oil production, although Biden suggested OPEC+ could still take “further steps in the coming weeks” to bring down prices at the pump.

“On human rights, I think the trip was a disaster,” said Miller. “Biden is now perceived to be pursuing an inconsistent, if not hypocritical, policy." Human rights received no mention in the US-Saudi joint communique released by the White House.

Saudi expert Karen Elliott House wrote in The Wall Street Journal that Biden’s 24 hours in the Saudi coastal city highlighted “to the world that neither Saudi Arabia nor other Gulf states trust the US enough to make any sacrifices to renew badly frayed relations.” (For more on the future of US-Saudi relations, register here for House’s live Al-Monitor Pro Q&A with Andrew Parasiliti on Friday.)

It's all about the reset. Others say Biden’s visit wasn’t about “deliverables” so much as it was shoring up relations with regional counterparts, particularly Saudi Arabia and the United Arab Emirates.

“It's certainly true that our partners value these relationships,” said Gerald M. Feierstein, a distinguished senior fellow at the Middle East Institute and former US ambassador to Yemen. “The president making the initial foray into the region is important,” he said. “One way or another, I think that the president needed to kick the process off.”

On Israeli-Arab normalization, there were a few small wins: Saudi Arabia’s opening of its airspace to Israeli overflights, and the planned withdrawal of US and international forces from the strategic Red Sea island of Tiran.

While the trip yielded no major public breakthroughs on the war in Yemen, the Palestinian-Israeli conflict or on Iran, the visit allowed the president to engage nine Arab leaders at the GCC +3 summit on a wide range of regional issues. The readouts and communiques were extensive and often detailed.

Few could expect any of these matters to be "solved" as a result of the Biden visit, but critics may be missing the importance of US-led regional diplomatic summitry on complex and fragile situations, as well as to balance an expanded US deterrent and military posture — another achievement of the trip.

Left behind? There was hope that Biden’s visit would yield some progress on US citizens and residents held on travel bans in the kingdom. But Air Force One left Saudi Arabia on Saturday without any of the Americans on board. State Department spokesperson Ned Price referred Al-Monitor to the White House when asked if administration officials received any assurances on the political prisoners.

Moving on. The Biden visit signals a turnaround on US-Saudi policy. Khashoggi’s murder, while not off the table, is no longer the centerpiece of the relationship. Biden said his piece on Khashoggi, MBS said his, and they agreed to move on.

Egyptian media reports that Ethiopia has begun the third-stage filling operation of its controversial Grand Ethiopian Renaissance Dam (GERD) amid a continued dispute with its downstream neighbors, Egypt and Sudan. According to Ahmed Gomaa, recent satellite images showed the water level in the GERD lake has crossed last year’s level. The filling comes as no surprise to Cairo and Khartoum, which say the megadam will threaten their freshwater supplies. Experts say a compromise on the GERD is needed now more than ever.

Lt. Gen. Aviv Kochavi, the chief of staff of the Israeli armed forces, is visiting Morocco this week in the first ever public visit by Israel’s top soldier in uniform to the Arab state. The two countries agreed to establish full diplomatic ties in 2020, as part of a deal that included US recognition of Rabat’s sovereignty over the Western Sahara. Ben Caspit writes that Israel’s intelligence and cyber capabilities could prove useful in Morocco’s ongoing conflict with Algeria and the Polisario rebels over the long-disputed region.

3. Palestinians push back on airport claim

Turkish President Recep Tayyip Erdogan announced this week that his government is canceling student loan interest, a move originally put forward by his opposition. Nazlan Ertan writes that Erdogan is trying to woo youth voters ahead of the upcoming presidential elections. “Many pollsters identify young voters as among Turkey's kingmakers in what promises to be a close race between Erdogan’s 20-year-old rule and the opposition,” she writes.

The Iraqi-Syrian border remains volatile amid continued attacks by the Islamic State in the desert terrain. In late June, IS claimed to have captured and executed a member of the Jughayfa tribe in Iraq’s northwestern Nineveh province. Shelly Kittleson writes that the IS activity comes as “concerns grow about tens of thousands of women and children in limbo, many of whom are exposed to Islamic State indoctrination, and joblessness heightens desperation.”

On his podcast this week, Ben Caspit interviews J Street Israel’s executive director Nadav Tamir, who says Biden’s engagement with the Saudis is good for Israel.