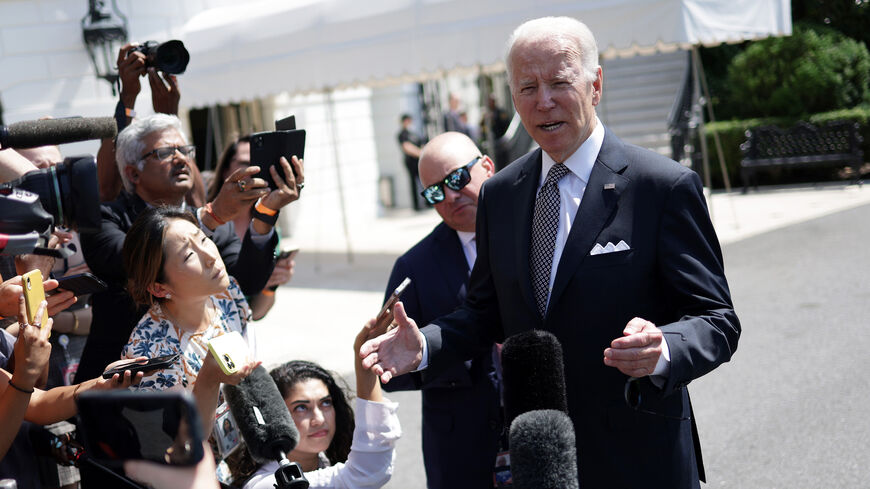 US President Joe Biden speaks to members of the press prior to a Marine One departure from the White House June 17, 2022 in Washington, DC. - Alex Wong/Getty Images

It was exactly 33 years ago this month, in June 1989, that the People’s Liberation Army crushed pro-democracy demonstrations at Tiananmen Square, killing hundreds or more, in June 1989.

US Secretary of State James Baker described Tiananmen as ‘the greatest blow to normalization’ since US President Richard Nixon's opening to China in 1972.

US-Sino relations in 1989 were at their peak, Baker writes in The Politics of Diplomacy, and Tiananmen was a ‘great leap backward.’

Baker described the Chinese leadership as ‘utterly oblivious’ to US concerns on human rights following the crackdown. The George H. W. Bush administration imposed sanctions; Democrats and Republicans in Congress united to push for an even tougher line by the White House.

The Bush Administration understood that the US-China relationship needed a rebalance, to show Beijing that human rights abuses had their cost in ties with the US, while trying to avert a complete break in the relationship.

Bush dispatched National Security Adviser Brent Scowcroft on a secret mission to Beijing to convey that message, less than four weeks after Tiananmen, as the crackdown on dissidents was ongoing.

The bilateral relationship remained tense throughout the remainder of Bush’s term, but events compelled some realism on both sides.

In 1990, the US needed China not to veto a UN Security Council resolution on Iraq (Beijing ultimately abstained).  The next year, the Soviet Union collapsed.  Human rights refocused the relationship, but the business of diplomacy continued.

There is peril in historical analogies.  The Chinese and Saudi cases are more dissimilar than similar. China has been a competitor and rival to the United States for more than seven decades; Saudi Arabia has been a valued US partner over that same time.

But there is also a distinctly American common thread in both cases: finding the right balance between human rights and realism in foreign policy.

The two poles exist, often uneasily, in the American style and practice of diplomacy, as former US Ambassador Ryan Crocker explained on an Al-Monitor podcast.

While the early emphasis on the Khashoggi case and human rights played well with the base, Biden also had several high-stakes, high-consequence priorities in the Middle East: ending the war in Yemen, dubbed the worst humanitarian tragedy in the world; reviving the Joint Comprehensive Plan of Action (JCPOA), or Iran nuclear deal; and advancing normalization with Israel.

And all of the above required an active and engaged US partnership with the Kingdom.

As Baker and Scowcroft did with their Chinese counterparts, Biden’s team kept a steady diplomatic pace with the Kingdom to recalibrate the partnership around these shared priorities.  One year after Biden took office, the US-Saudi relationship has been reset. The relaunch of the US-Saudi partnership will take place when Biden visits the Kingdom July 15-16, after first stopping for meetings in Israel and the West Bank.

An astute observer of politics in the Middle East said to Al-Monitor this week that a US presidential visit is often something of consequence.

And there is indeed a sense of consequence, and change, associated with the type of undertaking like the GCC +3 (the three being Egypt, Jordan and Iraq) summit Biden will attend in Jeddah, at the invitation of King Salman.

This next chapter in US-Saudi relations will be judged by what happens after the summit, not what came before.  Yemen, dubbed the worst humanitarian tragedy in the world, is in the third month of a fragile truce, a sign that US-Saudi diplomacy has traction.  Yemenis need this war to end.  The Iran nuclear negotiations are on life support.  Whether there is a deal or not, the US and the region need to be on the same page for both diplomacy and deterrence with Iran — a lesson learned from 2015.

Human rights will be part of the agenda too; that part won’t and can’t change.  And there are, of course, the energy and food crises as a result of the Ukraine war, a stalemated Israeli-Palestinian peace process — we can keep going.

US, Saudi Arabia sponsor talks to break deadlock on Sudan

Another area of US-Saudi cooperation is in Sudan, where a military-led coup upended a fragile democratic transitional government back in October 2021.

US and Saudi diplomats hosted members of both the Forces of Freedom and Change (FFC) and the military coup authorities, including the deputy chairman of the contested Sovereign Council ruling Sudan, Mohamed Hamdan Dagalo, at the Saudi ambassador’s residence on June 9,  Marc Espanol reports.

This was the first meeting of FFC representatives with the generals who deposed them and seized power since last year.

"The informal talks, which took place in parallel to a now-suspended UN- and African Union-driven political process that failed to gain momentum, was meant to exchange views on how to solve the current political crisis in the country," writes Espanol. "But the move has been strongly rejected by Sudan’s main pro-democracy civilian groups."

The threat of a Turkish military operation in northern Syria has united disparate Syrian armed groups and battalions into a "joint operations room" outside Aleppo, Mohammad Hardan reports.

"The Turkish threats prompted the [US-aligned Syrian Democratic Forces, or] SDF to seek help from the regime's forces and its allies," adds Hardan. "During the past few days, it raised the regime’s flag along with pictures of Syrian President Bashar al-Assad on its strategic positions opposite the Turkish-backed opposition areas in an effort to obstruct the expected Turkish operation."

Check out last week’s Week in Review for the US and Russian reactions to the expected Turkish operation; Fehim Tastekin has the scoop here on Turkish-Iranian tensions in Syria.