Will US sanctions bring China and Saudi Arabia closer?

Recent US sanctions on Saudi Arabia, coupled with prospects for Washington reentering the 2015 Iran nuclear deal, could push Saudi Arabia to strengthen its ties with China. 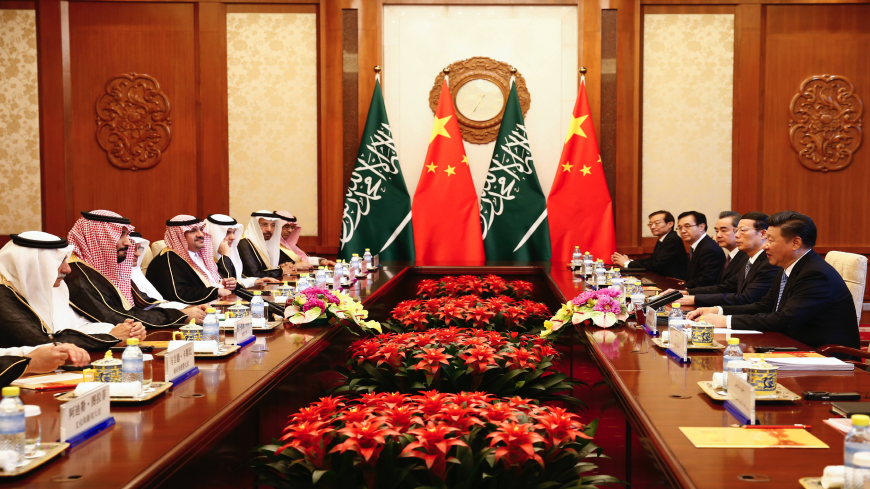 Following the release of the  declassified US intelligence report on the murder of Saudi journalist Jamal Khashoggi, there are signs that the US sanctions on the kingdom — alongside US efforts to reenter the Iran deal — could drive Saudi Arabia and China closer together.

The report by the Office of the Director of National Intelligence, released in late February, said US intelligence “assess[ed] that Saudi Arabia's Crown Prince Mohammed bin Salman approved an operation in Istanbul, Turkey, to capture or kill” Khashoggi.

While no sanctions were imposed on the crown prince, the Saudi Royal Guard’s rapid intervention force and a former Saudi intelligence chief were put on the sanctions list. In addition, around 76 Saudi individuals suspected of having been facilitators in the crime were barred from acquiring US visas.

Sanctioning MBS could have rattled th US-Saudi strategic partnership at risk, and had implications for Washington’s foreign policy objectives in the Middle East. As Secretary of State Antony Blinken observed, “The relationship with Saudi Arabia is bigger than any one individual.”

However, there may be some new implications for US-Saudi ties in the days ahead. Though things may look normal, Riyadh has become the second US ally after Turkey to be affected by sanctions. Though symbolic in nature, the kingdom might feel differently about these restrictions if Iran finds its own sanctions removed.

With both Washington and Tehran making focused efforts these days to revive the 2015 nuclear deal, known formally as the Joint Comprehensive Plan of Action (JCPOA), the two sides could reach a consensus anytime. If this happens, Riyadh might feel compelled to make some symbolic move, and at that point, China may look appealing. Just like Riyadh relied on its neighboring Gulf Cooperation Council states for support when the CIA intelligence report was first released, it could reach out to Beijing this time.

For China, this might become a golden opportunity for increasing its soft power in the kingdom. Even at the peak of the coronavirus pandemic, Beijing unleashed its so-called “COVID diplomacy,” including generous offers of vaccines to Riyadh once the worst phase was over. For sure, any space left by Washington is bound to be snapped up by Beijing, as it is trying to extend its presence in the kingdom.

There are several areas where Sino-Saudi interests currently converge.

First, economic cooperation remains the key in ties with Beijing. In recent years, Saudi Arabia’s trade ties with China have grown considerably. Riyadh has now become Beijing’s largest oil supplier with an export volume of over 2 million barrels per day.

Already, 35 bilateral economic cooperation agreements worth over $28 billion were signed in 2019 at a Saudi-Chinese investment forum in Riyadh; since then, a “100% increase” was noted in Chinese companies entering the Saudi market.

In addition, the kingdom happens to be part of China’s Belt and Road Initiative as well, and several large-scale construction and infrastructure projects — such as the world’s largest oil-fired power station in the port city of Yanbu by the Shandong Electric Power Corporation or the $667 million contract to build 5,000 homes in Riyadh — are already underway.

If China wants to gain more influence, it can also make large investments in the crown prince’s dream project — the $500 billion futuristic city of NEOM — and help make it a success. Meanwhile, Riyadh is also part of the China-Arab Space Silk Road and cooperates with Beijing in promoting the BeiDou navigation satellite system.

Complementing the main vision of the Saudi Vision 2030, the business possibilities between Riyadh and Beijing are simply endless. Adopting a China-related resolution at the foreign ministerial level, the 155th session of the League of Arab States Council on March 3 announced that Saudi Arabia will be hosting the first Arab-China summit this year.

Responding to questions at the press conference, Chinese Foreign Ministry Spokesperson Wang Wenbin said, “Going forward, China is ready to step up communication and coordination with Arab states and the League of Arab States, make good preparations for the China-Arab Summit, join hands to build a China-Arab community with a shared future in the new era, and aim for new strides forward in the China-Arab strategic partnership for the benefit of our two peoples.”

Second, Sino-Saudi military cooperation is another major sector, especially after Washington’s recent decision to limit arms sales to Saudi Arabia to just the “defensive” weapons category. As a result, Riyadh may be forced to look toward Beijing if it wants to obtain more lethal weapons.

According to a US intelligence report released in June 2019, Riyadh has already received Chinese help with its ballistic missiles program. During discussions on this issue in the US Congress, various lawmakers even recalled that the Saudi crown prince had vowed in 2018 to “follow suit” if Iran makes a nuclear bomb.

Having had a nuclear cooperation pact with Beijing since 2012, Riyadh does have a Chinese option. According to reports, China might be helping with the kingdom’s nuclear program, as a facility for extracting uranium yellowcake from uranium ore was constructed recently. Last year, around the same time that US and Saudi officials were unable to reach a cooperation agreement for developing nuclear energy, this development was reported in The Wall Street Journal.

At that time, Sen. Tim Kaine of Virginia had voiced fears that this could result in “a purported ally turning to China to accelerate a nuclear arms race in the Middle East.” Responding to questions about Beijing’s role in Riyadh’s nuclear plans, Wenbin had simply stated that "China and Saudi Arabia are comprehensive strategic partners that maintain normal energy cooperation.”

Though denied by the Saudi Energy Ministry as well, the existence of such a facility would signify that Riyadh wishes to reach a state of preparedness as yellowcake production is the main step for refining uranium fit for military as well as civilian use. When questioned, Saudi officials just acknowledged that Riyadh plans to build at least 16 civilian power nuclear reactors over the next two decades.

Finally, the human rights situation in Saudi Arabia is not very different from that in China. Nowadays, Washington has been stressing that Riyadh will have to work on improving human rights in the kingdom.

Specifically mentioning his concern over human rights abuses in Saudi Arabia, President Joe Biden “affirmed the importance the United States places on universal human rights and the rule of law” during a recent phone call to King Salman, according to a White House readout. Consequently, Riyadh might have to release the remaining activists in detention and introduce further legal reforms.

Having done away with a lot of conservative norms in the last two years, the kingdom has become much more tolerant. However, if the crown prince tries to modernize Saudi Arabia further, he could face criticism or even extremist backlash from influential conservative groups at home. If this happens, Riyadh might find it much easier to turn toward China, as Beijing also remains in the middle of human rights controversies constantly and has no objections whatsoever.

However, some major limitations will always remain in Sino-Saudi ties, as China does not wish to have a security role like the United States has in the Middle East. In fact, Washington continues to guarantee Beijing’s energy security in a very unpredictable region.

Meanwhile, the debate over the sanctions is not completely over yet, as pressure continues to build in Washington for taking some action against the Saudi crown prince. Various US lawmakers have initiated legal proceedings for holding the Saudi royal accountable. According to William Hartung, director of the arms and security program at the Center for International Policy, if such legislation is put in front of Biden, “it would put him in a very difficult position as to whether to veto.”