China's Foreign Minister Wang Yi must take care not to "underestimate the differences" between Iran and the GCC countries. 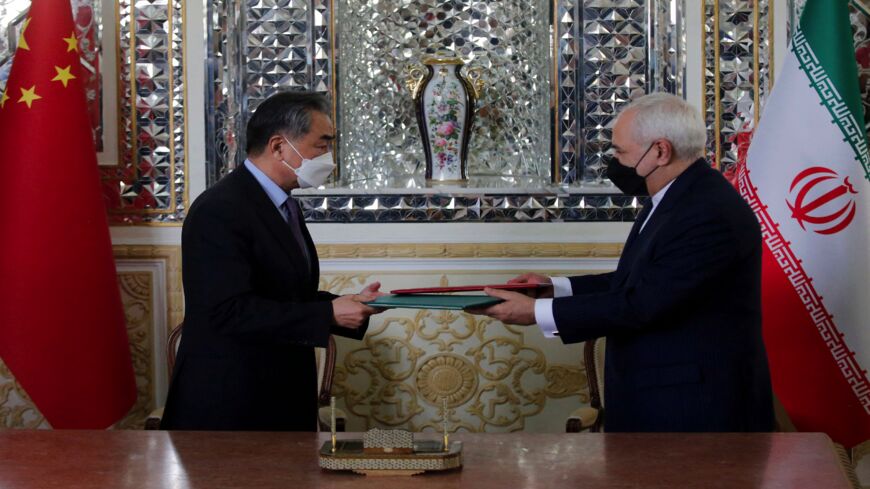 Iranian Foreign Minister Mohammad Javad Zarif (R) and his Chinese counterpart, Wang Yi, are pictured during the signing of an agreement in the capital, Tehran, on March 27, 2021. Iran and China signed what state television called a "25-year strategic cooperation pact," as the US rivals move closer together. - AFP via Getty Images

Marking a turnaround in its Mideast policy, Beijing recently unveiled a plan to promote peace and stability in the region. Completing an official tour of Saudi Arabia, Turkey, Iran, the United Arab Emirates, Bahrain and Oman this week, Chinese Foreign Minister Wang Yi conveyed China’s willingness to take on a more proactive role in solving issues in the Middle East.

Announcing the details of Wang's trip, Chinese Foreign Ministry spokesperson Hua Chunying stated the purpose was to grow a “synergy between the building of new development paradigm in China and major development strategies in those countries, support regional countries’ fight against the virus and socio-economic recovery, boost high-quality” cooperation on Beijing’s Belt and Road Initiative, “and discuss win-win cooperation,” as well as to “contribute China’s wisdom to maintain peace in the Middle East.”

With an emphasis on cooperation for the Belt and Road Initiative — a huge infrastructure project spanning Europe to East Asia — Beijing might try to settle regional issues by asking the member states to work on deriving immediate gains from the initiative and move on from unsolved disputes where possible.

Having signed on to the Belt and Road Initiative in recent years, all six of the countries Wang visited have an important role in the megaproject and unity will be required to achieve sustainable results. Putting forward a five-point proposal during his stop in Riyadh, Wang not only offered to mediate the Israel-Palestine issue and host peace talks in China, but he also kept the revival of the Iran nuclear deal a top priority.

Wishing to establish a new security framework for the region, he also called for holding a multilateral dialogue in which the security threat to oil facilities and shipping lanes in the Gulf would be addressed.

Previously, China always maintained a neutral stance and avoided getting directly involved in the Middle East. Concentrating on business and trade, this approach worked well as it dealt with the region only as a top energy consumer. Now the plan for a multilateral dialogue sounds good, but the problem is that Iran and the GCC (Gulf Cooperation Council) states usually take opposite sides in most matters, and Wang may be underestimating their differences.

Leaving aside old disputes, Iran and the GCC diverge even over current matters.

For instance, China would like Iran to return to the 2015 nuclear deal — known formally as the Joint Comprehensive Plan of Action (JCPOA) — so that it is released from US sanctions. A removal of restrictions on Tehran suits China, as this has become the main impediment in bilateral trade.

Even the full implementation of Beijing’s 25-year partnership with Iran — an agreement that has been long in the works and was formally signed on March 27 — is not possible without the removal of financial restrictions by Washington. In fact, China may have held back from signing the deal last year, as there was scant hope of the restrictions getting lifted by President Donald Trump.

Now, with President Joe Biden in power, the situation has changed. During this trip, Wang urged Washington to take substantial steps to ease unilateral sanctions on Tehran, while advising Tehran to resume honoring its nuclear deal-related commitments and achieve an “early harvest.”

However, GCC states like Saudi Arabia and the UAE continue to have reservations over reviving the nuclear deal. Even though the Arab states may listen to Beijing’s point of view, the removal of sanctions on Iran won’t suit even their business interests, as they have taken over a lot of the oil market share.

The Chinese foreign minister finally clinched the long-awaited, 25-year strategic partnership deal with Tehran during this trip, calling it a “complete road map” for future Sino-Iran cooperation. Yet Iranian Foreign Ministry spokesperson Saeed Khatibzadeh provided no details to the media.

Even the Chinese media provided scant information on the specifics of the deal. Official Chinese media outlets were vague in their reporting, with statements like, “The major partnership deal covers cooperation in many fields, including trade, economics and transportation.” Meanwhile, the Global Times — affiliated with the Chinese Communist Party — described it as a “normally deepening bilateral cooperation.”

Even Sino-Saudi ties have been described as a “strategic partnership,” not very different from the deal with Iran.

Just before Wang’s arrival in Iran, Chen Weiqing, China’s envoy to the kingdom, penned an op-ed, saying, “As China’s comprehensive strategic relationship partner, developing relations with Saudi Arabia is the priority direction of China’s Middle East policy. In the face of big changes unseen in a century and the new situation in the Middle East, the long-standing and increasingly strong China-Saudi Arabia relationship has become more strategic.”

Meanwhile, Beijing plans to finalize a free trade agreement with the Arab states. International trade expert Fawaz Al-Amali told Arab News that this agreement would allow GCC countries to open up to the economic communities in which China participates and provide them with preferential trade status.

Therefore, unless more details of the Sino-Iran deal become known, Iran and the Arab states seem to have the same level of strategic ties with China. Beijing has managed to balance both Tehran and the GCC for now, but at some point more details are bound to be released and either side may feel upset.

If that happens, it will speed up the regional rivalry.

Maintaining the security framework can get complicated if Saudi oil assets or any such target is attacked, and it is unclear whether Beijing wants any active role in this respect. In fact, during his trip, Wang has stressed nuclear nonproliferation at a time when most of the bigger Middle Eastern states are upgrading their defense capabilities.

Finally, Wang has also declared support for a Saudi effort for ending the war in Yemen, calling for a national cease-fire along with the restoration of air and sea routes that are held by Houthis. Even in this conflict, Iran is in the opposite camp, as the Houthis it backs say the offer does not fulfil their demands.

Iran and the Arab states will likely always retain some political and sectarian differences, and such hurdles make achieving an immediate breakthrough in multilateral talks nearly impossible.

Interestingly, the timing of Wang’s tour coincides with the Biden administration’s first few months in power. Re-creating foreign policy goals, Washington is trying to reengage with Iran and revive the JCPOA, reset relations with Turkey after a difficult phase and implement a relatively strict policy with Saudi Arabia, all at the same time.

Consequently, the Chinese foreign minister’s Middle Eastern tour also conveys the impression that Beijing wants to appear as an alternative option. Having emphasized human rights issues, Washington may have put some of the Middle Eastern countries on the defensive recently. Under these circumstances, China could provide a better level of comfort as it has no such concerns.

Even Washington has faced issues due to political disputes in this region — balancing the GCC and Tehran is not an easy task, and Beijing is likely to face similar scenarios in the future. In the long run, balancing rivals on every small matter can distract China from achieving its long-term aims in the region.