As China-Iran talks continue, Beijing keeps up outreach to Gulf

While Iran and China are still working to finalize a 25-year strategic partnership plan, Chinese officials continue to expand bilateral ties with the Gulf, something that could have unexpected implications for Iran-GCC ties. 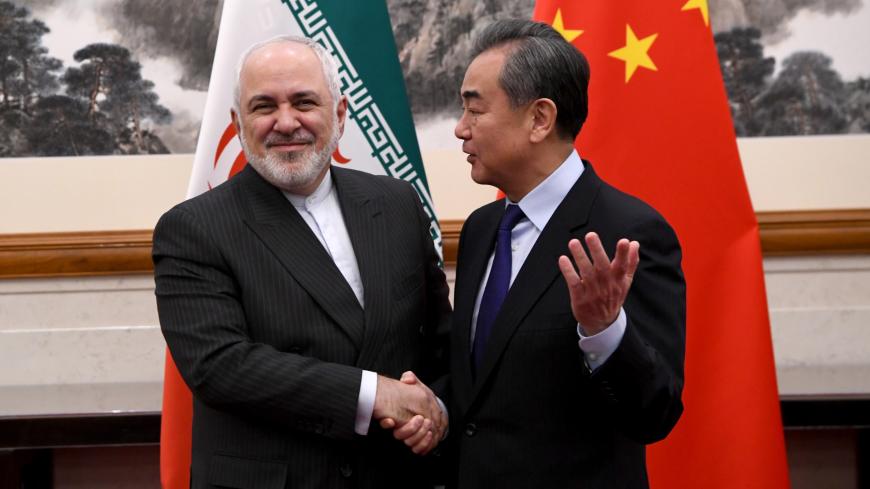 Iranian Foreign Minister Mohammad Javad Zarif arrived last week with a major delegation in Tengchong, in southwest China’s Yunnan province, on the invitation of his counterpart Wang Yi. These talks, which were apparently putting finishing touches on the 25-year Sino-Iranian Comprehensive Strategic Partnership, were significant for both the countries.

These talks, which took place on the 50th anniversary of the establishment of diplomatic ties between both countries, were an ideal opportunity to finally announce their long-term partnership. There were great expectations attached to this visit.

Yang, a former foreign minister and a former ambassador to the United States, is a member of the politburo of the Communist Party's Central Committee and the director of the committee's Foreign Affairs Commission.

The timing of this move shows Beijing’s efforts to balance its relations with Iran and the Gulf Cooperation Council. No room was left for any misunderstandings with its Arab partners as a top Chinese diplomat was meeting with Abu Dhabi’s crown prince about deepening their ties while Zarif was in China to discuss a long-term strategic partnership with China's foreign minister.

Saying that Beijing seeks more progress in its comprehensive strategic partnership with the United Arab Emirates, Yang reminded the crown prince that an important consensus on a Beijing-Abu Dhabi long-term plan was reached during his visit to China last year.

Additionally, Yang said China intends to “enrich the connotation of its comprehensive strategic partnership with the UAE” and further align development strategies as well as advance joint construction of the Belt and Road initiative.

Beijing already has long-term partnerships with Saudi Arabia and the UAE. Abu Dhabi, Beijing’s major trade partner in the GCC, is responsible for 28% of non-oil trade between China and the region. Thousands of Chinese companies are based in the UAE, which has approximately 200,000 Chinese residents; Abu Dhabi is a regional financial hub and the Arab world’s second-largest economy.

Now Beijing also wants to deepen its comprehensive strategic partnership with UAE, and it already has such a relationship with Saudi Arabia.

But If China is trying to balance its ties with the leading Arab states and Iran, is Beijing offering Tehran anything extraordinary?

The China-Iran deal, first brought up during a visit by President Xi Jinping to Tehran in 2016, is still being discussed in 2020, and the finer details have not been been disclosed publicly.

However, according to a draft leaked to the Iranian press a few months back, the 25-year strategic partnership would bring in a windfall of investments amounting to $400 billion in various Iranian sectors in exchange for steady energy provision to China for the same time duration.

Accelerating the process to finalize negotiations, the Iranian side has been more active since the draft was approved by a Cabinet session June 21. Zarif’s China visit is seen as a continuation of these efforts.

Reza Zabib, one of Zarif’s assistants, told IRIB news agency just before Zarif left for China, “We hope that Mr. Zarif’s visit to China will be a major step toward institutionalizing the 25-year cooperation document between the two countries, which will be a good basis for boosting economic relations.”

Following the Iranian Cabinet's approval, the ball is in China’s court now.

However, after meeting his Iranian counterpart, the Chinese foreign minister, while reiterating Beijing’s support for Tehran and reaffirming China’s commitment to the 2015 nuclear deal, did not announce the strategic partnership deal with Iran.

Before the talks, State Council spokesperson Hua Chunying had said, “During Iranian Foreign Minister Zarif’s upcoming visit to China, he will have talks with State Councilor and Foreign Minister Wang Yi. We want to work with Iran to deepen our bilateral comprehensive strategic partnership.”

Meanwile, China’s Global Times has given enthusiastic coverage to Yang’s visit to the UAE and the further upgrading of ties, while it was relatively quiet regarding Zarif’s visit and Tehran’s 25-year partnership with China. The official Chinese government statement's focus was on the 2015 nuclear accord and that of other Chinese media outlets was the same.

China ostensibly is in the final stages of studying the plan. Once it is formally announced, the Sino-Iranian strategic partnership deal has the potential to be a major turning point; it also could have a far-reaching impact on the West and elswhere.

In Iran, Mahmoud Vaezi, President Hassan Rouhani’s chief of staff, praised the outcome of Zarif’s visit, describing it as “very successful” and saying that “very comprehensive negotiations have been held about bilateral, economic, political and cultural issues as well as the 25-year plan.”

Just days after Zarif’s China visit, Rouhani hinted that Tehran is giving priority to strengthening relations with China, Iran’s neighbors and the Eurasian Economic Union in all areas, including energy and technology.

But there is nothing yet on paper. It is possible that China may not wish to commit itself publicly as it does not want to get entangled in regional political tensions and prefers to remain a neutral onlooker. Beijing has long and stable business ties with the oil-rich Gulf states, and trade there does not present the potential obstacles that trade with Iran could involve.

Mindful of US sanctions, China has reduced its oil imports from Iran and bilateral trade fell by one-third last year and 62% this year. In contrast, Chinese imports were up by 11% with the UAE this year, notwithstanding the coronavirus pandemic; its imports from Riyadh fell 28%, still a far cry from the drop with Iran. Due to US sanctions, China has now become more dependent on the GCC for its energy supplies.

Where Riyadh and Abu Dhabi are concerned, Beijing had already upgraded ties with them to such a level that even if the Iran deal is clinched it will not upset the balance of power in the region. Many clauses in the leaked China-Iran deal draft are similar to those in the Chinese White Paper on Sino-Arab relations.

Having such a comprehensive policy agreement with the Arab states that mentions cooperation in infrastructure, energy, trade investment, space and nuclear technology, agriculture and even military cooperation, China may not be offering Iran anything different.

When Beijing and Tehran finally make their long-term agreement official, the terms of the contract may be nothing new for the GCC states, which have been expanding their relations with China for a long time. Consequently, in the long run, Iran may have to be more tolerant with the GCC states as they also have close partnerships with Beijing.

China in the Mideast
Economy and trade
Iran-US tensions
Sanctions