Beijing and Tehran are deepening ties across sectors, but progress will depend on the Vienna talks and Iran’s elections. 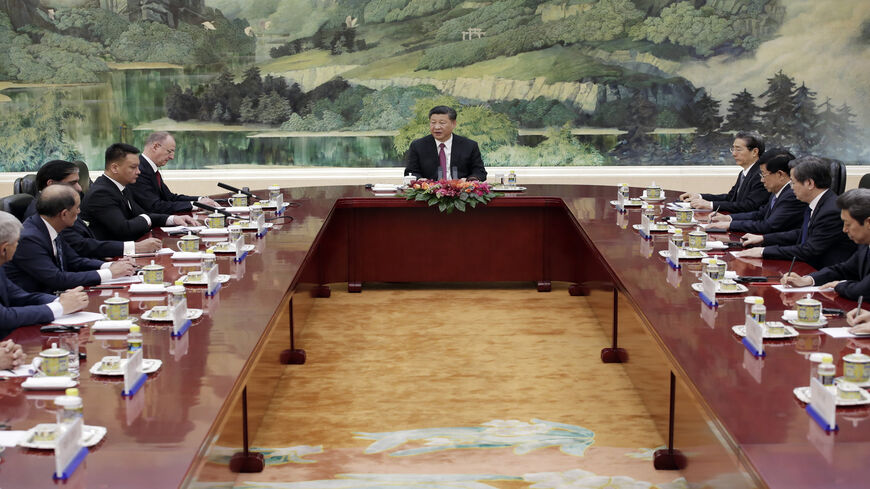 China's President Xi Jinping (C) speaks during a meeting with delegates of the Shanghai Cooperation Organization security secretary summit at the Great Hall of the People, Beijing, China, May 22, 2018. - Jason Lee/Pool/Getty Images

Since finalizing a 25-year strategic partnership agreement in March, Beijing and Tehran have remained rather quiet on any news regarding the deal and there have been no major announcements. This may be because Iran’s presidential elections are just around the corner, on June 18, and any further decisions would be taken by the next administration.

While there are few details on the agreement and there is not much focus on it in Iranian media, there are some signs that China-Iran ties are heading in a new direction.

To begin with, there is new hope regarding Iran’s potential membership in the Shanghai Cooperation Organization (SCO). Iran, which has had observer status in the Eurasian alliance since 2005, officially applied for full membership in the SCO in 2008 and again in 2009, but United Nations sanctions prevented it from joining. If Tehran succeeds in joining, it would mean the 25-year strategic partnership with Beijing has made a big difference.

In a press briefing May 30, Tajikistan’s Ambassador to Iran Zohidi Nizomiddin disclosed that Iran’s permanent membership in the SCO will be part of the group’s agenda in this year’s summit. According to Nizomiddin, “Iran’s membership is one of the main programs of the Shanghai Cooperation Organization, and if other countries are ready to accept Iran, Tajikistan will.”

It was Tajikistan that opposed Iran’s full membership at the SCO Summit in 2017.

In September, the newly elected president of Iran is to be invited to the SCO Summit in Dushanbe. Originally known as the Shanghai Five when it was created in 2001, the SCO is an economic, political and security alliance comprising of eight full member states — namely China, Russia, Kazakhstan, Kyrgystan, Tajikistan, Uzbekistan, India and Pakistan.

Presently, in addition to Iran, there are three other observer states with membership pending — Afghanistan, Belarus and Mongolia. SCO Charter rules prevented Iran from becoming a full member while it was under UN sanctions. Once those sanctions were lifted in 2016, US sanctions became an impediment, with China hesitant to make any commitment.

Meanwhile, Mohammad Keshavarzzadeh, Iranian ambassador to China, had the honor of addressing an important SCO gathering last week in Wuhan, the capital of China’s Hubei province. Among those attending were leaders of member countries, observer states and dialogue partners of the organization.

Second, Wang Qun, Chinese envoy to the UN and other global organizations in Vienna, recently emphasized that Iran’s legitimate concerns should be properly addressed in the ongoing negotiations to revive the 2015 nuclear deal, officially known as the Joint Comprehensive Plan of Action (JCPOA).

Attending the latest meeting of the JCPOA Joint Commission chaired by European Union official Enrique Mora, Wang said that progress has been made but key differences like sanctions' removal remain, though talks have been ongoing for more than two months.

Basically, the lifting of sanctions is a primary concern for Beijing as this poses a problem for the implementation of the China-Iran deal. This means that the Iran-China partnership cannot enter a practical phase until Washington removes restrictions.

Dina Esfandiary, senior adviser for the Middle East and North Africa Program at the International Crisis Group, wrote in April, “Much of the promised deepening of economic ties will remain somewhat dependent on the lifting of U.S. unilateral sanctions, as China doesn’t want to openly flout them. Sino-Iranian relations can only reach their intended potential if the nuclear crisis between Iran and the U.S. is resolved.”

Third, the Iran Small Industries and Industrial Parks Organization (ISIPO) and the Shanghai International Cooperation Association of Small and Medium Industries (SMEs) have inaugurated a center to promote cooperation between small business concerns of both countries this month.

Though in the initial phases, this mechanism is in line with the China-Iran deal, which is to be a "road map” for trade and economic cooperation. According to ISIPO head Ali Rasoulian, nearly 92% of Iran’s industries are small industries and ISIPO can facilitate them to “become more resilient by providing them the necessary infrastructure.”

More than 900 industrial parks and zones are already established across Iran and account for 48% of Iran’s total industrial units. Highlighting the importance of SMEs and industrial parks in the promotion of ties between Tehran and Beijing, he noted that Iran’s market has suitable economic parameters that have turned it into an attractive and promising market for Chinese companies.

Fourth, the first bilateral agreement after the 25-year deal with Beijing has been signed but it is for cultural cooperation and for preserving Asian heritage. Dealing with archaeology, conservation, management of historic sites and holding related exhibitions, this is more of a soft opening for the 25-year partnership.

Li Qun, head of China’s National Cultural Heritage Administration, said at the virtual conference, “This joint statement is the first bilateral document signed by the cultural heritage authorities of the two countries in the past 10 years, marking that the two countries’ cultural heritage cooperation has entered a new stage of development and is of milestone significance for the promotion of the Belt and Road Initiative.”

Finally, ever since the 13-year arms embargo by the UN expired in October last year, Iran has been interested in buying the J-10C, a lightweight Chinese fighter jet. According to latest reports in the media, Tehran has offered to buy the jet on a barter trade basis in exchange for energy supplies, and it is thought that Beijing may be considering this move.

Therefore, there is some activity behind the scenes. Interestingly, on the other hand, China has decreased crude oil purchases from Iran over the last month. As JCPOA negotiations progress further, Iranian oil exports have been on the rise but demand from China became low.

Commenting on this trend, Daniel Gerber, chief executive of the Geneva-based firm Petro-Logistics, said, “Our analysts observed a noticeable slowing of exports in the early part of May, which coincided with a buildup of floating storage in the East.”

This might be due to the slow demand during the coronavirus pandemic, or the fact that Gulf Cooperation Council (GCC) states are still monopolizing Beijing’s energy imports. The second option is more likely as Beijing’s crude oil imports from top supplier Saudi Arabia rose by 8.8% in March from a year earlier.

And this means that China is trying to balance Iran and the GCC even after the partnership deal.