Thanks to US and Saudi mediation, Sudan's coup leaders held talks for the first time with the government they deposed last year. 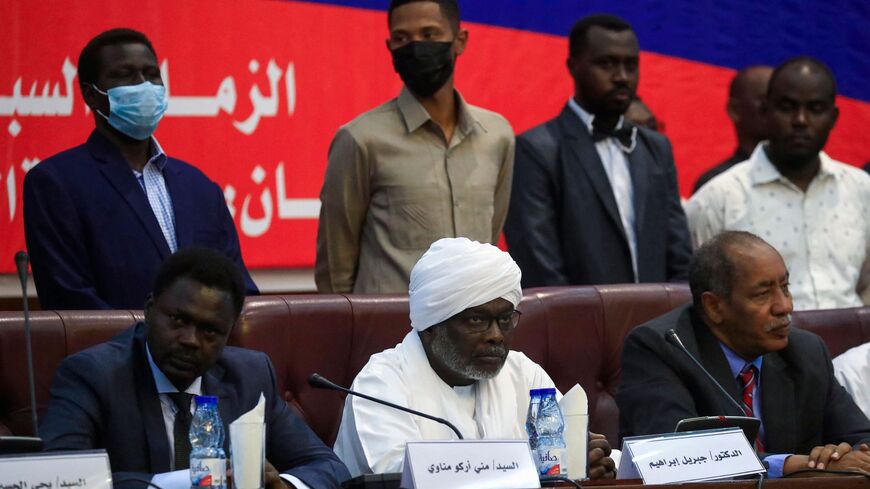 Head of the Sudan Liberation Movement and governor of Darfur Mini Minawi (L) and head of the Justice and Equality Movement and Finance Minister Gibril Ibrahim (C), as well as other political leaders, hold a conference entitled the National Consensus Charter of the Forces of Freedom and Change Khartoum, on Oct. 2, 2021. The ceremony came as Sudan reels from fragmentation within the Forces of Freedom and Change, an alliance that spearheaded protests that ousted President Omar al-Bashir in April 2019. - ASHRAF SHAZLY/AFP via Getty Images

For the first time since last October’s military coup, and following mediation by the United States and Saudi Arabia, the coalition of civilian forces that co-governed Sudan during its fragile democratic transition met on June 9 with the generals who deposed them and seized power in the country.

The informal talks, which took place in parallel to a now-suspended UN- and African Union-driven political process that failed to gain momentum, was meant to exchange views on how to solve the current political crisis in the country. But the move has been strongly rejected by Sudan’s main pro-democracy civilian groups.

The meeting, held at the residence of the Saudi ambassador in Khartoum, brought together members of what remains of the Forces of Freedom and Change (FFC) and representatives of the military coup authorities, including the deputy chairman of the contested Sovereign Council ruling Sudan, Mohamed Hamdan Dagalo.

According to a statement from the US Embassy in Sudan, the talks aimed to build trust and confidence among the two parties, and also addressed ways to initiate a process that leads to a renewed democratic transition.

The FFC later said in a statement that, despite the meeting, their priority remains to agree on a roadmap to end the status quo imposed after the military coup — and to be assured that they do not intend to replicate a partnership with the generals like the one before their seizure of power. The alliance, notably more weakened than when it assumed part of the power in Sudan in 2019, also stated that they do not want to be part of a new civilian government.

“We believe this is an opportunity to end the coup and an opportunity to ensure a safe exit for the people and the military toward democracy, justice and a new society,” said Yasir Arman, member of the pro-democracy alliance, in a press conference on June 10.

The meeting between the FFC and the ruling military junta took place only a few days after the political coalition announced its boycott of a civil-military dialogue table jointly promoted by the United Nations Integrated Transition Assistance Mission in Sudan (UNITAMS), the African Union (AU) and the East African Intergovernmental Authority on Development (IGAD).

The FFC criticized the trilateral mechanism for being dominated by pro-military groups and Islamists from the orbit of the regime of deposed dictator Omar al-Bashir, whom the generals have been courting since their open seizure of power. As a result of their refusal to participate, the promoters of the process decided to suspend it right after its opening session on June 8, first to try to convince the FFC and bring it on board and then to assess the situation after the meeting sponsored by the United States and Saudi Arabia.

In this context, the members of the trilateral mechanism stated that some of the political forces that were absent from the first meeting are “major stakeholders in the political process for a democratic transition” and noted that the process “will not be meaningful without their participation.” In addition to the FFC, those who boycotted the process also included the resistance committees, the decentralized groups of revolutionaries at the forefront of the fight against the coup authorities, and the Sudanese Professionals Association (SPA), another group that was key in the protests that forced the fall of Bashir and which today is also active in the struggle against the country’s military regime.

“The tripartite mechanism was the right platform, but obviously the start of the process was completely wrong. Bringing the Islamist and the old regime people to the table was a mistake that turned the process upside down and made it similar to Bashir’s national dialogues,” Khalid Mukhtar, a Sudanese political science professor, told Al-Monitor.

“The process should have aimed at ending the coup crisis and realizing the aspirations of the democratic transition in Sudan. And for this, there are two camps. The pro-coup camp, which includes the military and their allies, and the anti-coup camp. Attempting to confuse this simple equation made the process deviate from its objective,” he added.

The FFC justified their decision to participate instead in the direct talks with the generals on the grounds that at this stage the national dialogue should be restricted to its political coalition and the military, as well as other civil opposition groups should they agree to it. The FFC said the fact that the invitation to the meeting came from two powers such as the United States, represented on this occasion by visiting Assistant Secretary of State for African Affairs Molly Phee, and Saudi Arabia through its ambassador Ali bin Hassan Jaafar, was also a key factor in the decision. The alliance further explained that its strategy to reverse the military coup is based on three means: mass protests, international solidarity and a potential political solution leading to the handover of power to civilians.

The outcome of the meeting was not clear. But the FFC stated it had proposed the need to define a clear roadmap that includes a political process involving only the country’s revolutionary forces and the ruling military junta and aimed at handing power to civilians. The FFC also expressed that trust-building measures to create a democratic climate in the country, such as ending repression and political persecution, have not been completed by the military. And it advanced that it would soon present a clear vision reflecting its roadmap. Both sides also appointed a representative to act as a point of contact.

The National Umma Party, one of the main components of the FFC, stated on June 13 that the political alliance should be in charge of completing the political solution to the conflict that the country is going through. It said that the rest of the revolutionary forces should be involved only in the last phase of the process in order to unify national ranks.

The meeting at the residence of the Saudi ambassador was quickly welcomed by the United States and UNITAMS, as it fits the kind of solution they envisage for Sudan. But the move was strongly criticized by the main revolutionary forces in the country, including the neighborhood resistance committees and the SPA. The fact that the FFC leveraged the popular mobilizations that occurred since the coup, over which it has rather limited influence, to its political advantage also created unease. In this regard, the FFC enjoyed considerable sway when it signed the partnership with the military in 2019 to co-lead the transition following the fall of Bashir, but the alliance has been losing influence and support and has been weakening ever since.

Nada Ali, a Sudanese activist closely monitoring the situation in the country, also noted that the FFC overlooked the need for accountability for the perpetrators of the coup and the violence that occurred since the fall of Bashir, a central demand of the pro-democracy movement. “The resistance committee’s [political] charter specifically mentioned the need for transitional justice and how to achieve it,” she told Al-Monitor.

The Khartoum State Resistance Committees Coordination reiterated in a statement issued on June 8 that they reject any negotiation with the coup authorities and a new partnership with the military junta. They also criticized the top-down political approach pursued by the tripartite mechanism, as they consider that it does not address the roots of the current conflict in the country and prevents addressing its underlying causes. The groups repeated that their priority remains to overthrow the coup and hold its perpetrators accountable, anticipating that the outcome of any such negotiation does not concern them. They further called on the international community to clearly support their ambitions and aspirations.

“We were expecting that at some point the FFC would engage in a process that potentially leads to a new settlement or compromise. I think it was just a matter of time,” Muzna Alhaj, member of a resistance committee in Khartoum, told Al-Monitor.

Alhaj added that the US government does not seem to want to imagine Sudan without a partnership with the military or without the existence of the military. “They don’t want to make the effort to get rid of the military and see Sudan fully ruled by a civil government,” she noted. “They basically don’t have faith.”

As per seeing the FFC as the legitimate representative of the street, Alhaj said that “this is also because they maybe do realize that they are the weakest link among all the revolutionary forces or just a force that claims to be revolutionary while they are not.” She addded, “They’re easy to bring into deals that will grant bringing them back into power.”

The SPA also issued a strong statement declaring that history is repeating itself and that plans to reach a new partnership are back on the table. The group said that this type of negotiation prevents the democratic revolution in the country from achieving its goals and reiterated that its priority is to remove the generals from the country’s political scene.

“SPA’s position has always been clear: no compromise, no negotiation and no legitimacy for this coup. We will bring this coup down by people’s power, not by negotiating with perpetrators,” Mohaned Elnour, a spokesperson for the group, told Al-Monitor.

“The FFC has always been willing to compromise. They change their position many times, and sometimes they are with us and the revolutionary forces, raising the three noes, and sometimes not. I believe they use this just as a tactic; they don’t believe in people’s power. And that’s why they always have the solution that the army should be involved,” he said.