The country’s military leader proposed a change in the structures created after the coup, but his plans have been widely rejected as it maintains the army’s power and privileges. 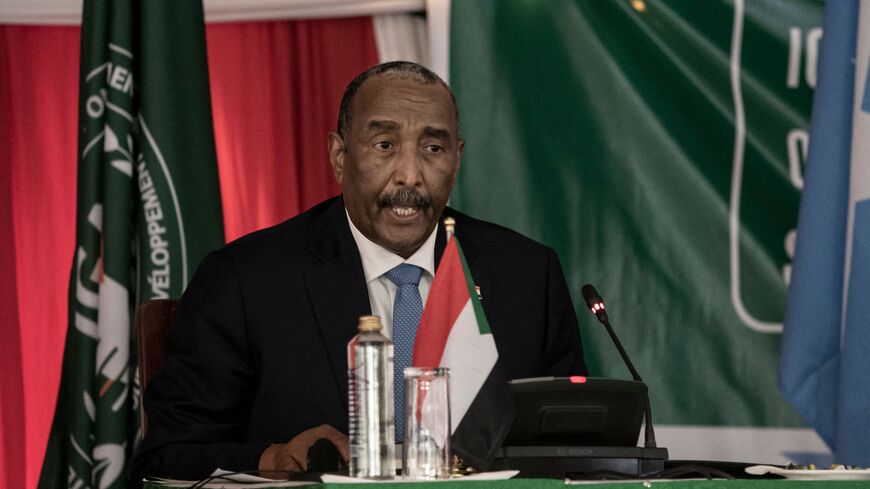 Dressed in his usual military attire, Gen. Abdel Fattah al-Burhan, leader of last October’s coup in Sudan, announced on July 4 in a speech on state television that the armed forces will withdraw from political negotiations to form a new government and will cede the initiative to civilian political forces. However, Burhan also stated that once the new executive is formed, he will dissolve the Sovereign Council, which currently serves as head of state and which he himself heads, and will instead establish a vague military council with no civilian oversight and with wide-ranging powers yet to be defined.

In his brief appearance, Burhan stated that his new proposal seeks to allow Sudan’s political and revolutionary forces to sit down and agree on the formation of a new government charged with undertaking “all the demands of the transitional period.” He also said that the new Supreme Council of the Armed Forces he envisions would be composed of the army and the ruthless Rapid Support Forces, a powerful paramilitary group, and would be in charge of the high command of the regular forces, security and defense matters, as well as all other competencies to be agreed upon with the new executive.

Burhan’s announcement came a few days after the revolutionary forces opposed to the coup launched an escalation of mobilizations to push for the fall of the military junta, and following the failure of the international community to organize a political process between the military and civilians as a way out of the crisis that Sudan is going through. In this context, Burhan’s new plan has been rejected en bloc by the main opposition groups, which have widely interpreted the general’s move as a sign of weakness but also as a maneuver to retain the military’s power and privileges by other means and structures.

“This is a gamble by Burhan,” Kholood Khair, managing partner of Insight Strategy Partners in Khartoum, told Al-Monitor. “He wanted to put the pressure of governing and of seeing through some of the difficulties that Sudan will face in the next few months — flooding, cholera, food insecurity and the economic downtrend that [Sudan] is already facing — on a civilian government, knowing that they are divided. And he knows it because he has actively tried to divide them,” she added. “Instead, they’ve called off his bluff,” she said.

The unilateral change of script proposed by Burhan comes as Sudan has been without a prime minister since January, with a government still in office, a serious economic crisis, and alarming levels of violence and insecurity in its peripheral regions. At first, the coup general promised that he would quickly appoint a technocratic executive to run the country until elections in June 2023 under the direct influence and supervision of the army. Yet eight months into the coup he has been unable to fulfill the promise.

At the same time, the junta has been confronted with the broad and constant levels of social mobilization that the civilian democratic opposition has been able to articulate and sustain despite the harsh repression of the security forces, which have killed more than 110 people and injured and arrested hundreds. At the forefront of this struggle against the coup, authorities are the resistance committees, decentralized groups of revolutionaries that have proved to be particularly adept at dodging the regime’s repressive and co-optation tactics, as well as setting the agenda for the rest of the opposition to the coup.

The protest movement made a new show of force during the massive demonstrations that took place in cities across the country on June 30. Protests were again harshly repressed by security forces, which killed at least nine protesters in Khartoum and injured more than 600, according to the Central Committee of Sudanese Doctors. Coup authorities again disrupted internet connectivity earlier in the day and arrested hundreds of activists. There were also reports of sexual violence against female protesters.

Building on the momentum created by the massive turnout, the Khartoum resistance committees called for an “open revolutionary escalation with all peaceful means.” Shortly thereafter, several sit-ins began to appear in different parts of greater Khartoum as a new way to add pressure on the coup authorities. While Burhan was making his speech to the nation, security forces attacked one of these sit-ins and besieged a nearby hospital.

The escalation of mobilizations and Burhan’s new plan also follow an inconclusive meeting held on June 9 under the auspices of the United States and Saudi Arabia between the coalition of civilian forces that co-governed Sudan during its democratic transition, the Forces of Freedom and Change (FFC), and the military that ousted them. It was the first such meeting since the coup, but the results were unclear and it took place in parallel to a UN- and AU-driven tripartite political process that had failed to gain momentum.

The main criticisms of Burhan’s plan include the vagueness of his proposed military council, its omission of a process of accountability, reform of the security and military institutions, and the political role that the armed forces will play in the future. His silence on the economic activities of the army and the RSF, the role of the latter, and the future of the leaders of the rebel groups allied with the coup authorities that are now part of the Sovereign Council and the government also generated suspicion. And many noticed that Burhan did not define what he means by "civilian forces."

“Burhan and the military have been working very hard for the last couple of months to make sure that they co-opt the tripartite in a way where they push some civilian actors who are civilian by nature but are also pro-military and pro-coup — to push them into that process so that they can speak on behalf of the coup,” Hamid Khalafallah, nonresident fellow at the Tahrir Institute for Middle East Policy, told Al-Monitor.

“The FFC and the resistance committees have been very clear that if the process keeps including actors that are speaking on behalf of the coup, including actors who are pro-Islamists and the former regime, they won’t take part in it,” he added.

The Khartoum resistance committees quickly rejected Burhan’s new plan, although they considered his move a victory of the revolution. The groups considered in a statement that the military council proposed by the general represents an attempt to “reposition in the future of the Sudanese state.” And they declared that his fate, like that of his allies, is a process of accountability and that the army must undertake a process of reform.

“We are not blind and we are not supposed to be dragged by words. We are trying to focus on the main content,” Ammar Yahya, a member of a resistance committee in South Khartoum, told Al-Monitor. “It is a desperate attempt to gain more time,” he added, “and his speech is devoid of real content, as he ignored the core of the struggle with him.”

Yahya also noted that the current sit-ins “are a form of continuous public pressure on the coup authority.” But he said that they will not limit themselves to this type of action and will accompany it with other kinds of mobilization as part of the revolutionary escalation, including a call for strikes and civil disobedience after the Eid vacations.

The FFC held an emergency meeting on July 4 to study Burhan’s speech and during a press conference the following day declared that the general’s move is a “maneuver and a tactical retreat” resulting from the constant mobilizations in recent months and the June 30 protests. The group also reproached him for failing to address the security and military reforms, the end of the political and economic activities of the military and security bodies, their civilian oversight and his “generalization” in the use of the term “civilians.”

“The forces of the FFC considered that his position represented a deception for the mass movement, as he announced the return [of the military] to the barracks while granting the Supreme Council of the Armed Forces wide executive powers in controlling the central bank, foreign relations and all security agencies, the police and the intelligence service,” Sharif Mohamed Osman, a member of the FFC, told Al-Monitor.

He added, “And this adds to his withdrawal from negotiations through the tripartite mechanism and the American-Saudi initiative, which shows the coup leader’s unwillingness to reach a political solution that ends the coup and restores the path of a civil democratic transition.”

Khair also noted that this time the international community did not rush to take a position in favor of Burhan’s new plan, as they did last November when they quickly backed a unilateral agreement that the coup leader signed with former Prime Minister Abdalla Hamdok. That move turned out to be very unpopular, and now, Khair said, these same actors are waiting to see what the public reaction and the scope of the proposal is.

“This is a great opportunity for the international community to retreat and let the pro-democracy movement in Sudan take the lead. And it’s up to the international community to apply pressure in a strategic way that will support the pro-democracy movement to make the kind of gains that we now know are still possible,” she concluded.