Under the coup generals, Sudan has plunged into a deep political and economic crisis, while attempts are underway to forge a way out that avoids even greater instability. 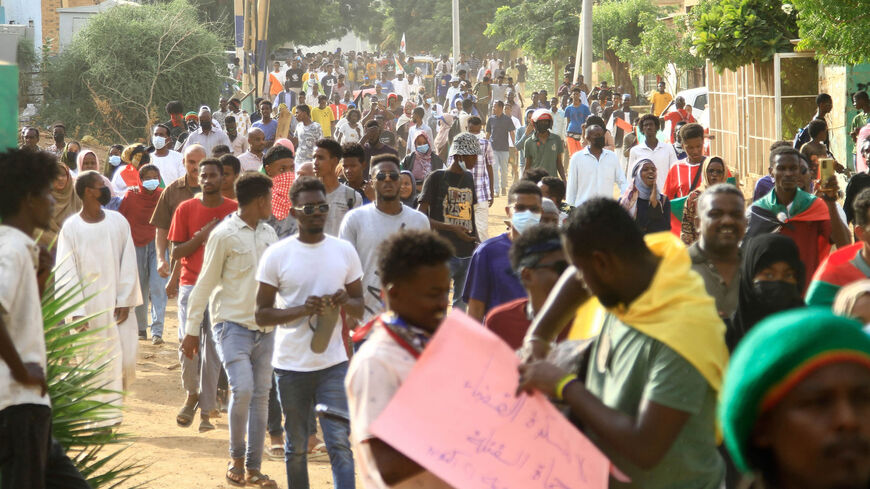 One year after the military takeover that put an end to the fragile democratic transition in Sudan in Oct. 25, 2021, the country finds itself caught in a deep political crisis between the coup alliance, unable to consolidate authority, and the democratic civilian movement.

When the generals seized power, the coup leader, Abdel Fattah al-Burhan, promised that he would quickly appoint a technocratic Cabinet to rectify the situation and run the country until elections in 2023. Yet one year later, Burhan has been unable to fulfill his promises.

Under his rule, Sudan’s economy has collapsed, the country is experiencing high levels of violence and insecurity, particularly in the periphery, and Khartoum is suffering from broad international isolation as fears of greater instability mount. The junta has also been confronted by a broad and sustained popular opposition despite their harsh crackdown.

Faced with this resistance, Burhan announced last July that the armed forces were ready to take a vague step back from the political scene, but his maneuver was widely rejected. In recent months, there have been other proposals and failed attempts to try to find a way out, with the role of the generals in the future of the country as the main sticking point.

“All actors, including the military, have realized that [the coup] was a mistake, but the way out is something that still needs to be agreed upon,” Hamid Khalafallah, nonresident fellow at the Tahrir Institute for Middle East Policy, told Al-Monitor.

As the anniversary of the coup approached, there has been speculation about an imminent deal between the Forces for Freedom and Change-Central Council (FCC-CC), which includes part of the civilian coalition that co-led the transition until the coup, and the coup generals.

Sharif Mohamed Osman, an official of the FFC-CC, confirmed to Al-Monitor “informal contact” with Burhan and the head of the paramilitary Rapid Support Forces, Mohamed Hamdan Dagalo, based on a draft constitution prepared by the Sudanese Bar Association (SBA).

“In the new draft, the SBA tried to avoid some of the weaknesses of the previous constitutional document, and they are credited with circulating it with many parties,” Abdelrahman Gasim, a lawyer familiar with the process behind the draft, told Al-Monitor.

But Osman expressed doubts over an imminent agreement because of the deep distrust toward the generals and the political cost that such a deal would have for the coalition. “Confidence that the military will fulfill pledges made in informal meetings is very weak,” he noted.

Any agreement that revalidates a power-sharing formula and does not include the return of the military to the barracks, a process of accountability and a comprehensive security sector reform is bound to meet with opposition from within the pro-democracy movement, spearheaded by the increasingly organized resistance committees.

“Our role a year after the coup is to knock new doors through the revolution’s forces and diversify the methods of struggle,” Faisal Alsaeed, member of a resistance committee in Omdurman, west of Khartoum, told Al-Monitor.

The generals’ inability to cement their authority, and the country’s delicate stalemate, has also led to cracks within the loose alliance that supported the coup, raising fears that the increasingly untenable situation could degenerate into further instability or another coup.