Members of deposed dictator Omar al-Bashir's party have been appointed to high state positions and reinstated throughout the government. 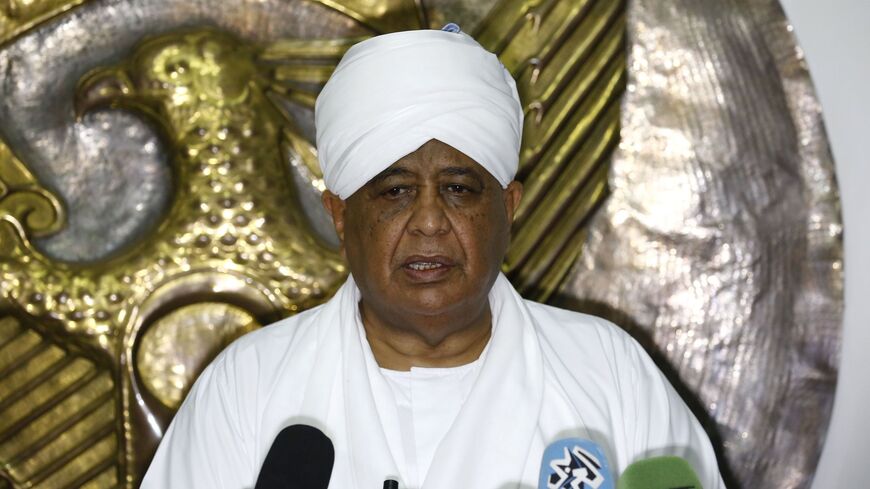 Sudanese Foreign Minister Ibrahim Ghandour speaks to the press following a meeting with his Qatari counterpart in Khartoum, on March 10, 2018. - ASHRAF SHAZLY/AFP via Getty Images

After a long period in the shadows, Ibrahim Ghandour, former head of Sudan’s outlawed National Congress Party (NCP) that was founded by deposed dictator Omar al-Bashir, reappeared on camera on April 8 to express his support for last October’s military coup that put an end to the country’s fragile democratic transition. Dressed in a white robe and matching headdress, Ghandour claimed in an interview with Al Jazeera that the seizure of power by the coup generals was, as they claim, a step in the corrective path. And he declared, without offering consistent arguments, that the situation in Sudan has since then improved.

His public appearance came just a day after news broke that Ghandour, who had served as foreign minister under Bashir, was to be released from prison where he had been since mid-2020, after being acquitted of multiple charges, including financing terrorism and plotting the assassination of former Prime Minister Abdalla Hamdok, the NCP said in a statement.

Ghandour is one of the highest-ranking officers of the Bashir regime to be released from prison since the military assumed control of the transitional government. But he is not the only one. Since October, prominent figures from the NCP and the Bashir regime have been rehabilitated by coup authorities either by granting their release from prison, returning their assets, dropping the charges brought against them during the transition period or appointing them to senior state positions. In parallel, albeit with less pomp, judicial authorities are also reinstating throughout the civil service hundreds of former Bashir regime officials in a counterrevolutionary process that is raising concern in the pro-democracy movement.

“There is great concern among the revolutionaries, who represent a large segment of the Sudanese people, about the release of the leaders of NCP after the coup and the return of most of them to their positions in the civil service and vital sectors,” Mohamed Gamie, a Sudanese journalist and anti-coup activist, told Al-Monitor.

For many in Sudan, it is not that the remnants of Bashir’s regime are suddenly making a comeback because a significant part never really left. Gen. Abdel Fattah al-Burhan, leader of the October coup and head of the contested Sovereign Council ruling Sudan, was appointed chief of staff when Bashir was removed from that post in 2017 Gen. Taha Osman el-Hussein. And Burhan repeatedly insisted during the transition on keeping in his ranks Islamist members recruited during the Bashir era.

Gen. Mohamed Hamdan Dagalo, better known as Hemedti and today deputy head of the contested Sovereign Council, is also the commander of the feared paramilitary group Rapid Support Forces (RSF), which was established by Bashir and has a long history of atrocities committed throughout the country, particularly in Darfur.

“The detained members of National Congress Party were simply released because the coup generals are part of the ousted regime,” Salwa Saied, a Sudanese activist, told Al-Monitor. “Now, after being exposed by the Sudanese people, who are confronting them in the streets, the generals, who suffer from internal and external isolation, have no alternative but to disclose their actual, ugly and deceptive face,” she added.

Since the two generals openly seized power, the rehabilitation of members in the orbit of the NCP and the Bashir regime, which had been kept apart by the civilian side that co-led the failed transition, has been uninterrupted. And activists, lawyers and journalists are struggling to keep track of the process in light of the speed at which it is taking place.

In the security services, the agency that most highlights this counterrevolutionary process is the General Intelligence Services. A month after the military takeover, Ahmed Ibrahim Ali Mofadl, until then No. 2 in the corps, was appointed its director-general despite having been a member of the National Security and Intelligence Service dissolved after the fall of Bashir. He had also been appointed by Bashir as governor of South Kordofan and head of the state’s NCP in 2018, Sudan Tribune reported. GIS powers were expanded shortly after, including the power to detain civilians, as had been the case with the NISS.

On Jan. 19, faced with his inability to form a civilian government to replace the one he had dissolved in the coup, Burhan assigned again the undersecretaries of each portfolio to assume the functions of minister on an interim basis until a future election could be held. The interim government resulting from this maneuver is also filled with figures who had held important positions under Bashir, according to Sudanese activist Nada Ali.

Among them are Osman Hussein, tasked with the post of interim prime minister despite having been secretary-general of the Ministry of Cabinet Affairs under Bashir, and acting Foreign Minister Ali Al Sadiq, who had for many years during the Bashir era been the spokesperson of the same portfolio.

In the same vein, other high positions in the state have been occupied by figures from the Bashir regime. In November, the contested Sovereign Council appointed as president of the judiciary Abdel-Aziz Fathal-Rahman, sworn in as deputy chief justice to Bashir in 2019. On Feb. 25, Burhan issued another decree to appoint Hussein Yahya Jangool as governor of the Central Bank of Sudan, despite the fact that he had held the very same position between March and December 2019 thanks to a presidential decree from Bashir. And on April 10, Burhan appointed Muhammed Ibrahim al-Buzai as director of the General Authority for Radio and Television. Buzai already held this position during the brief period when Sudan was ruled by a military junta following the fall of Bashir.

Perhaps more transcendent in this counterrevolutionary process than the appointments of relatively well-known faces to prominent state positions is what is happening precisely below them. Since October, coup authorities have also made great efforts to undo all of the work done by the so-called Empowerment Removal Committee, a body that aimed to dismantle the kleptocratic structures of the Bashir regime of the Sudanese state.

In addition to the arrest of civilian leaders who had been in charge of the committee, this process is leading to the reinstatement of at least hundreds of people from the NCP orbit throughout the public administration. In recent months, the Sudanese courts have canceled, one after another, the committee’s decisions, and have ordered the return to their posts of hundreds of people in the Zakat Fund, the oil sector, the airport's company, the state media, the council of ministers, the health sector and the Foreign Ministry.

“Sudanese pro-democracy [activists] feel that their sacrifices to overthrow the NCP went to waste. The party’s affiliates find complete freedom to organize their own activities and are not subjected to any form of violence, unlike the revolutionary and anti-coup activities, which the security authorities meet with excessive repression,” Gamie said.

It was in this context that Ghandour was recently released from prison along with two other NCP leaders, Anas Omer and Kamaleldin Ibrahim, Reuters reported. In January, another court acquitted Ali Osman Taha, Bashir’s former vice president. And although the former dictator remains behind bars, Al Jazeera reported in March that his defense requested he be transferred to a hospital or home, citing his delicate state of health. For now, however, these better-known figures have not been appointed to public positions.

Despite these concessions and the fine words that figures like Ghandour have dedicated to the coup leaders, the latter have reiterated that they will not allow the NCP, which remains outlawed, to participate in the political transition they have engineered. Yet activists and analysts see the promise as merely playing to the gallery and easy to bypass.

“They are saying that because they are still trying to portray this image that they are doing all this to protect the revolution and address the needs of the people, something that every coup leader would say,” Hamid Khalafallah, a Sudanese researcher and policy analyst, told Al-Monitor. “In reality, if the military is to hold elections in Sudan, as they are saying, they will definitely allow the National Congress Party to participate. Maybe not with the original name, but they will definitely find the way to allow them to take part."

In his interview with Al Jazeera, Ghandour already stated that they will legally challenge the decision to outlaw the NCP. And in parallel, the party issued a statement in which it said that “the judicial innocence of our party leaders constitutes an opportunity for a new national launch.” In fact, many in Sudan believe that the coup leaders have accelerated the rehabilitation of the party in recent months in light of their evident lack of popular support and inability to win the backing of any significant political organization.

Yet Khalafallah warned that bringing back the old guard could easily backfire. “This will get people even angrier and frustrated with the military, so there will be even stronger resistance,” he said. “This will [also] cause a lot of difficulties for the military with their regional allies, because the Gulf, which is somehow backing the military, will not be happy if the military brings back the Islamists because they are against that.”

Yasir Arman, deputy chairman of the Sudan People’s Liberation Movement-North led by Malik Agar, which is one of the signatories of the October 2020 Juba Peace Agreement between the transitional government and a number of armed groups in the country, also warned in an article extended to Sudan Tribune on April 9 that the return to power of the NCP would have a negative impact on the peace implementation process.

“Since the beginning of the coup, we are saying that this is an NCP coup,” Mohaned Elnour, a spokesperson for the Sudanese Professionals Association, one of the groups at the forefront of the resistance against the military regime, told Al-Monitor. “Now it is an open book; there is no way of manipulating anymore. You have the streets, which are the revolutionary forces, and on the other side the coup authorities with their allies, the NCP, other parties that were with the NCP until their fall, and the Islamists."