A hedging US response to the Palestinian-American journalist's killing reinforces beliefs about favoritism for those living in the West Bank and Gaza. 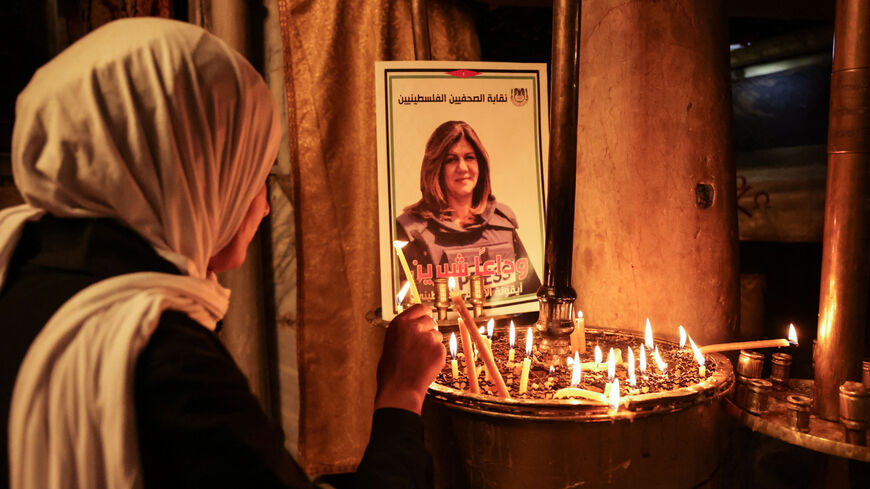 A woman lights a candle in front of a poster depicting veteran Al-Jazeera journalist Shireen Abu Akleh, who was shot dead while covering an Israeli army raid in Jenin, at the the Church of the Nativity in the West Bank biblical city of Bethlehem on May 11, 2022. - HAZEM BADER/AFP via Getty Images

Our take: Accusations that the US has “whitewashed” Israel’s role in the journalist's killing could overshadow Biden’s West Bank visit.

On Monday, the State Department said that Palestinian-American journalist Shireen Abu Akleh “likely” died by Israeli gunfire while she was covering an early morning raid in the West Bank city of Jenin on May 11.

After reviewing evidence provided by the Israel Defense Forces and the Palestinian Authority, the US “cannot say conclusively with 100% certainty exactly what happened,” department spokesperson Ned Price told reporters on Tuesday.

Price said the recovered bullet was too badly damaged to reach a definite conclusion about the source of the gunfire, but American investigators “found no reason to believe that it was an intentional killing.”

Fury over US findings. Those conclusions are unlikely to satisfy Palestinians who believe the Israel army intentionally targeted the journalist. Abu Akleh’s family has accused the United States of providing cover for Israel.

Khalid Elgindy, a senior fellow at the Middle East Institute, said the US assessment reinforces the perception among Palestinians that the United States is not an impartial mediator.

“There's a serious lack of confidence in the US among Palestinians across the political spectrum. The Shireen Abu Akleh debacle has only set that back,” he said.

PA under pressure. In the eyes of some Palestinians, the US findings may have also undermined the credibility of the Palestinian Authority. As Daoud Kuttab reports, the Biden administration put pressure on the Palestinian leadership to hand over the bullet that killed Abu Akleh with the promise that Americans would be in the room when Israeli analysts examined it.

“They come out looking complicit in what most Palestinians I think see as an attempt to whitewash the killing of Shireen Abu Akleh and absolve Israel of responsibility,” Elgindy said.

The president of the Palestinian Authority, Mahmoud Abbas, is due to meet Biden next week. The administration has touted the West Bank visit as the start of a “new and reinvigorated dialogue" between the US and the PA.

PA spokesperson Ibrahim Milhem confirmed to Al-Monitor that Abbas would raise Abu Akleh’s killing during his meeting with Biden, as well as the promised reopening of the US Consulate in Jerusalem and removing the Palestine Liberation Organization’s terrorist designation.

Skepticism from Congress. Democratic lawmakers still have questions. Last month, 24 senators led by Maryland Sen. Chris Van Hollen called for “the US to be directly involved in any investigation.”

A spokesperson for Van Hollen said Wednesday that the senator is “seeking more information on the inquiry,” adding that he “continues to believe that the US should be involved in an independent, impartial and transparent investigation.”

1. High cost of living a concern for Israeli voters

Heading into Israel’s election season, an increasing number of voters are listing the country’s high cost of living and soaring housing prices as a top concern. Recent polling suggests the economy, rather than security, will dominate voters’ concerns.

Newly minted Prime Minister Yair Lapid has only four months to show Israelis he’s better equipped than former premier Benjamin Netanyahu to bring down the cost of living. Netanyahu has gotten a head start. He’s already hosted campaign events at local supermarkets, where he’s pledged to lower voters’ grocery bills. “Netanyahu, as always, has transformed himself into the man of the hour, from “Mr. Security” to “Mr. Economy,’” writes Ben Caspit. “Will the public buy this metamorphosis?”

Israel’s approaching election will again highlight the divide between its rival Arab political factions: Ra’am, which advocates for joining the ruling coalition in future Knessets, and the Arab Joint List, which opposes cooperation with any coalition that doesn’t advance negotiations with the Palestinians.

Ra’am’s strategy for the Nov. 1 election isn’t yet clear. “Will the party endorse Lapid as prime minister in its upcoming election campaign? Or will it repeat the strategy of its previous campaign and play the field, with the intention of joining whatever coalition is formed?,” writes Afif Abu Much. A senior member of Ra’am hinted that the party would prefer to remain in the current coalition headed by Prime Minister Yair Lapid, telling Abu Much that Ra’am will continue “along the same path.”

Major Palestinian factions are working together on a new platform to challenge Fatah's dominance of the Palestine Liberation Organization, report Ahmad Melhem and Mai Abu Hasaneen. Talks aimed at forming a new national front are taking place in both the Gaza Strip and Beirut. On June 19, Hamas political chief Ismail Haniyeh called for a comprehensive Palestinian strategy to overcome internal divisions.

The Gaza-based militant group is seeking to bring together various Palestinian factions more than a year after its 11-day war with Israel. The leader of one of those factions, the Palestinian Islamic Jihad, told Al-Monitor that “calm in the face of Israel cannot remain the name of the game. There is a need for a unified national front.”

Sweden’s government is under fire at home for the concessions made to Turkey in return for its support for the Nordic NATO bids. Under the memorandum signed on June 28, Finland and Sweden pledged they would not support the Syrian Kurdish groups that Turkey considers a threat to its national security. Many Swedes, including members of the ruling Swedish Social Democratic Party, have criticized the NATO deal as overly favoring Turkey. “The disgruntlement and even outrage that the text unleashed on the Swedish political stage also reflects that the deal was more to the taste of [President Recep Tayyip] Erdogan than the other signatories,” writes Cengiz Candar.

As we reported in the Week In Review, the trilateral agreement signed in Madrid hardly makes Sweden and Finland’s membership a done deal. Each of the 30 NATO member states need to ratify the accession protocols, and Turkey’s parliament is in no rush.

Egyptians said goodbye to the last of the Nile River’s historic floating houseboats. The government has steadily destroyed or towed away the historic homes, and on Monday, removed the final 15 floating in Cairo’s Giza neighborhood. The Egyptian government has accused the houseboat owners of links to the Muslim Brotherhood, causing pollution or failing to pay fees.

The iconic houseboats date back to the early 20th century before many were demolished or towed away under former President Gamal Abd El Nasser to make more space for water sports. One of the recently evicted houseboat owners told Nada Shaker that her removal from the Nile was akin to “pulling a fish out of the water so it will definitely die.”

Dina Esfandiary, senior advisor for the Middle East and North Africa at the International Crisis Group, discusses the latest round of indirect talks between Iran and the United States, Iran’s policies in the region and how Tehran is managing its ties with Russia and China amid the war in Ukraine.

Amberin Zaman and Turkish geopolitical analyst Yoruk Isik discuss Ukraine’s accusations that Russia is stealing its grain and shipping it to Turkey. Islik argues that Turkey’s erosion of the rule of law has contributed to the illegal trade.