Palestinians furious at tepid US findings on journalist's killing

Reactions from the ground are coming in following the results of the ballistic test performed by the United States on the bullet that killed Palestinian journalist Shireen Abu Akleh. 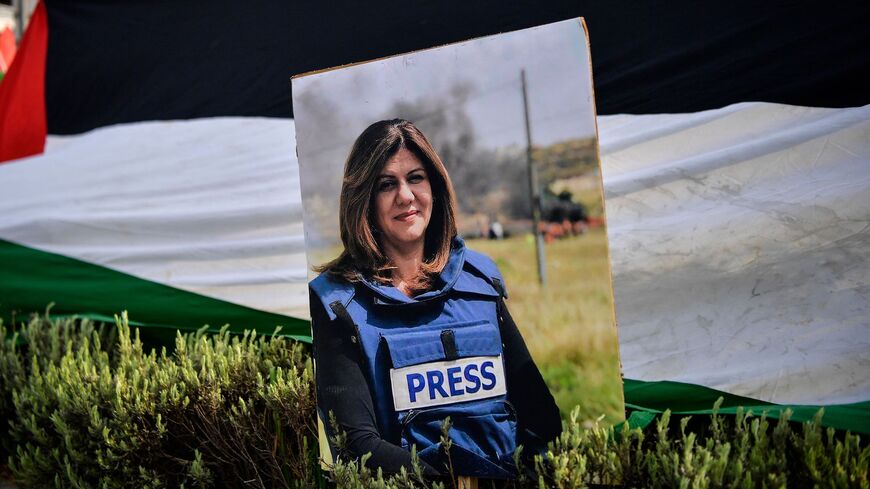 A portrait of slain Al Jazeera reporter Shireen Abu Akleh is pictured during a demonstration in front of the Israeli Embassy to support Palestinians, in Athens on May 16, 2022. - LOUISA GOULIAMAKI/AFP via Getty Images

The family of slain Palestinian journalist Shireen Abu Akleh, the Palestinian public and leadership, and human rights organizations reacted angrily to the claim by the United States and Israel that the ballistic test of the bullet that killed Abu Akleh did not provide conclusive evidence that Israeli soldiers were behind the act. However, a US statement said that the American-Palestinian was “likely” killed by the Israelis. Without having interviewed any Israeli soldiers, the US statement exonerated Israelis of the premeditated act by saying that if the fatal bullet had come from the Israeli side, then it was "unintentional."

The United States pressured the Palestinian government before the visit of US President Joe Biden to allow them to conduct tests of the bullet along with Israelis, with the promise that Americans would be in the room and the bullet would be returned. It was returned without any damage, although the Americans claim that the bullet itself was damaged and it did not provide “conclusive” proof that it had come from Israel. Palestinian officials have said that the bullet was not damaged.

Abu Akleh’s family issued a long statement calling the US report “incredulous” and noting that the “focus on the bullet has always been misplaced and was an attempt by the Israeli side to spin the narrative in its favor." The statement questioned the reason for the anonymity of the US investigator: “We were expecting that the American investigation would focus on finding the responsible party and hold them responsible not parsing over barely relevant facts."

A statement by the Palestinian Foreign Ministry slammed the attempts at questioning Israel’s intentions. “No amount of vagueness or politicization can exonerate the killers, whitewash the crime or hide the truth.” The state of Palestine, the statement concluded, will “continue undeterred” with its efforts at the international level, including the International Criminal Court.

The Israeli human rights organization B’tselem also criticized the United States and Israel and asked, “On what grounds does the US State Department seek to dismiss her killing as the results of tragic circumstances and not as a crime for which those responsible should be held accountable.” The Israeli organization concludes that the odds that those responsible for the killing of Abu Akleh will be held accountable are all but nonexistent. The statement ends by saying that “meanwhile, Israel’s international impunity remains unchallenged.”

Long-time US-Arab activist and president of the Arab American Institute James Zogby called the US statement disgusting. He tweeted, “Truly disgusting. After weeks of Israel’s lying, denying, & obfuscating, the US provides Israel w/additional cover by saying the murder of #ShireenAbuAqla was just “likely” an Israeli, but no evidence it was “intentional.” So a shot in her head from 300 yards was an “oops?”

Khaled Elgindy of the Middle East Institute questioned the ineffectiveness of the United States as a peace broker, saying, “I wrote a whole book on why the US has been so ineffective as a peace broker, but the answer is summed up in this single statement by the State Dept — a total inability/unwillingness to hold Israel accountable for anything.”

Jewish Voice for Peace said that they stand with the calls for justice. “We stand with Shireen Abu Akleh's family in continuing to demand justice for her assassination by an Israeli sniper. This is a shameful day for the US, which failed to properly investigate the murder of one of its own citizens by a military it sends $3.8 billion to every year.”

Major international media outlets, including The New York Times, CNN, The Washington Post and The Associated Press, all conducted their own investigations by using video, visiting the site and interviewing all witnesses on the ground. All concluded that the professional television journalist was killed by Israelis without any provocation.