Preliminary findings from the IDF indicate that no gunfire was directed at Shireen Abu Akleh, but Israel is finding a cold reception for its investigation. 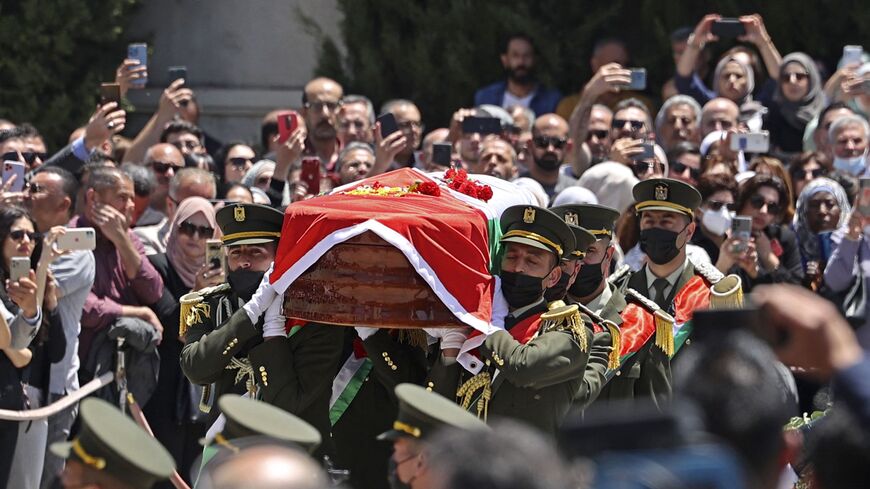 Palestinians attend a state funeral for veteran Al-Jazeera journalist Shireen Abu Akleh at the presidential headquarters in the West Bank city of Ramallah on May 12, 2022. - ABBAS MOMANI/AFP via Getty Images

The tragic May 11 shooting death of Palestinian-American Al Jazeera correspondent Shireen Abu Akleh while IDF were operating in Jenin could have troubling consequences for Israel’s international image. Israeli security experts are also concerned that the killing of the reporter, who was a household name in the Arab world, could prompt additional terror attacks against Israelis in the West Bank and Israel.

An initial Israeli military inquiry into the incident reads that soldiers from the elite Duvdevan commando unit entered the Palestinian refugee camp in the town of Jenin to detain a suspected Hamas terrorist. According to the IDF, they came under heavy fire by armed militants and fired back. Abu Akleh, who was wearing a helmet and vest clearly marked with PRESS, was shot and killed.

The incident has dragged Israel into an international imbroglio, with the Palestinian Authority blaming the IDF for the killing. Israel quickly launched a widespread public diplomacy campaign in an effort to control the damage, convening urgent meetings of officials from its Public Diplomacy Directorate, the prime minister’s office, the Foreign Ministry and the Israel Defense Forces to counter the emerging narrative blaming Israel for Abu Akleh’s death.

The initial IDF spokesperson’s response less than two hours after her death read, "As part of the activity in the Jenin refugee camp, suspects fired heavily at the force and threw explosives. The force responded by firing. Hits were detected. The possibility that journalists were hit, possibly by Palestinian gunfire, is being investigated.” The IDF’s Arabic-language spokesperson, Lt. Col. Avichai Adraee, later tweeted that according to initial assessments, she was killed by shots fired by armed Palestinians and not by the IDF.

But Israel is struggling to get its version across. So far, the only Israeli footage made public shows masked Palestinians letting off volleys of gunfire, but it is unclear if and how they were linked to the journalist’s killing. Other videos show the fatally wounded journalist lying face down on the ground and being evacuated in a car to a nearby Palestinian hospital.

In the initial hours after Abu Akleh was pronounced dead, Israel called on the Palestinian Authority to cooperate in a joint investigation, but said the Palestinians refused. An Israeli military official said the Coordinator of Government Activities in the Territories had asked the Palestinians for the bullet removed from Abu Akleh’s body in the post mortem in order to conduct a forensic examination to determine its origin. Israel suggested the investigation be conducted in the presence of PA and American representatives, the official told reporters.

In the morning hours of May 12, the PA’s liaison with Israel, Minister Hussein a-Sheikh, announced that the PA rejected Israel’s offer for a joint probe and said it would not hand over the bullet that killed the reporter. He said the PA would conduct an independent investigation into Abu Akleh’s killing.

Israeli officials have stated that without the PA's cooperation, it would be difficult for the IDF to thoroughly investigate the incident. The Palestinian coroner, Dr. Ryan al-Ali of the Pathological Institute at a-Najah University in Nablus, said his findings could not determine the provenance of the bullet, which was reportedly identified as 5.56 millimeters in diameter and was shot from an M16 rifle, which is used by both the IDF and Palestinian militants.

Judging by statements from Israeli security officials, the IDF appears to be making serious efforts to get to the truth. In addition to an investigation by the military police, military chief Lt. Gen. Aviv Kochavi appointed a panel to probe the incident, led by the head of the IDF’s commando division, Col. Meni Liberti. Kochavi has expressed regret at Abu Akleh’s death and that at this point it is not possible to determine who fired the fatal bullet.

Defense Minister Benny Gantz also addressed Abu Akleh’s killing, telling the Knesset, "Preliminary findings from the investigation conducted by the IDF indicate that no gunfire was directed at the journalist. However, the investigation is ongoing. On the other hand, we have seen footage of indiscriminate shooting by Palestinian terrorists, which is likely to have hit the journalist."

Israel has a complex relationship with the international media. Last May, Israel took harsh criticism during a military operation in Gaza after it blew up a building in Gaza City it said housed Hamas offices. The Associated Press and other media outlets also had offices in the high rise. The IDF was also censured after one of its spokespeople told foreign media outlets last May that Israel had launched a ground invasion of Gaza, an erroneous report regarded as an attempt to exploit the media in order to mislead Hamas. The officer responsible was reprimanded.