Israel knows that regardless of who shot Al Jazeera correspondent Shireen Abu Akleh, it cannot win the public opinion battle being waged across the Middle East and beyond. 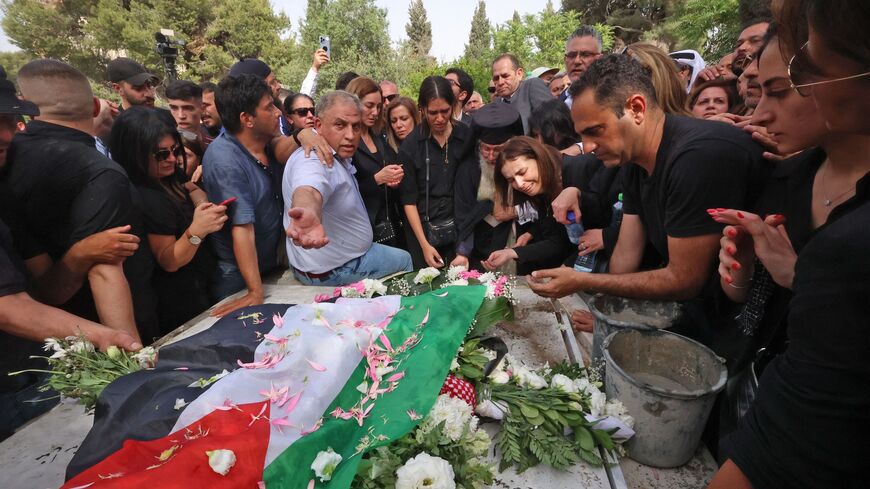 Mourners gather during the burial of slain veteran Al Jazeera journalist Shireen Abu Akleh at the Mount Zion Cemetery outside Jerusalem's Old City on May 13, 2022, two days after she was killed while covering an Israeli army raid in the West Bank. - HAZEM BADER/AFP via Getty Images

It seems that Israel cannot win the public opinion battle being waged across the Middle East and beyond over the May 11 shooting death of Palestinian-American journalist Shireen Abu Akleh in the West Bank town of Jenin. The odds are stacked against it by Palestinians and other Arabs, human rights organizations and even friendly foreign governments.

Israel is making concerted efforts to fight back, unlike past incidents when it abandoned the public opinion arena. The most famous such incident, highly reminiscent of Abu Akleh’s killing, was the 2000 shooting death of 12-year-old Mohammed al-Durrah during a clash between Israelis and Palestinians in Gaza. Television footage showing the child cowering next to his father and the Palestinian narrative blaming Israel for his killing echoed around the world. Israel denied responsibility for his death, but various probes were inconclusive.

Interim findings by the military’s Central Command of this week’s shooting death are also inconclusive. According to the military spokesperson, an initial probe explored two possible sources of the shooting — armed Palestinians firing at Israeli soldiers or an Israeli soldier firing from his jeep at a militant standing near the journalist, about 200 meters away.

Shireen Abu Akleh was one of the best-known reporters in the Middle East, a star of the Arabic-language Al Jazeera network, which Israel regards as a media outlet that uses its influence to foment incitement against it. Abu Akleh was often dubbed the “face of the Palestinians” and her tragic death during an operation by Israel’s elite Duvdevan commando unit has become a public relations nightmare.

Despite being considered hostile to Israel's efforts to maintain security in the West Bank, her death did not please anyone here. She enjoyed good relations with many of her Israeli colleagues as well as with senior officials and decision-makers’ aides. “She was a courageous and professional journalist,” an Israeli who worked with her for many years and currently holds a high-level Israeli government post told Al-Monitor on condition of anonymity. “She was against us but I am very sad at her death.”

With its bitter experience of previous incidents, Israel’s public diplomacy machine took quick action after the Jenin shooting. The military posted video footage filmed by Palestinians, during which armed militants can be heard shouting that they had shot an Israeli soldier and he was lying on the ground. “No Israeli soldier was hit,” a senior Israeli source told Al-Monitor on condition of anonymity. “So who did they hit? This requires an investigation.”

At the same time, Prime Minister Naftali Bennett, Foreign Minister Yair Lapid, Defense Minister Benny Gantz, military chief Lt. Gen. Aviv Kochavi and the head of the Central Command Maj. Gen. Yehuda Fuchs were quick to offer a joint probe with the Palestinians. Their attempt to assume control of the agenda and the narrative was repelled by the counterwaves washing over social media.

A senior Israeli public diplomacy source commented to Al-Monitor on condition of anonymity that during the second intifada (2000-2005), when Mohammed al-Durrah was killed, social media was in its infancy. “Today, an incident like Shireen’s killing can reverberate widely and cause damage that will take years to repair. We have tools to quickly get our version out there and fight back, and we made full use of them.”

Israeli experts are convinced to this day that al-Durrah was struck by a Palestinian bullet during heavy crossfire. The Duvdevan force that entered Jenin just after sunrise is well trained in urban warfare against Palestinians suspected of terrorism. Its fighters do not fire off random salvos. Some of the world’s best sharpshooters, their shooting is precise and targeted.

“The IDF does not knowingly shoot civilians,” Maj. Gen. (res.) Elazar Stern, Israel’s minister of intelligence and the former commander of the IDF Officers Training School and an officer in the Paratroopers Brigade, told Al-Monitor. “More fighters of the Duvdevan unit that operated in Jenin have been killed by friendly fire over the years than by the enemy. When you operate in urban enemy territory, many things can go wrong. The problem is that the terrorists deliberately shoot at us from within densely populated areas, causing collateral damage to innocent civilians for which we are deeply sorry.”

Stern added that Israeli soldiers cannot always know if there are journalists in a combat zone. “Israel is a democracy and we greatly appreciate the journalists who cover battles, even if they are against us. One cannot promise anyone who enters a battlefield that they will not get hurt,” Stern said. He pointed out that dozens of journalists are killed every year around the world, but complained that “when it involves the IDF, the reactions are different.”

Abu Akleh’s American citizenship adds another dimension to the incident and its aftermath, but officials in Tel Aviv and Jerusalem were quick to use her background as leverage. In contacts between the prime minister’s office and the Foreign Ministry with the US administration, Israel offered a joint probe with the Palestinians under international supervision to determine the source of the fatal bullet.

The United States, in turn, urged the Palestinians to agree to a joint autopsy and ballistics testing of the bullet removed from Abu Akleh at a Palestinian hospital. The Palestinians turned them down. Palestinian President Mahmoud Abbas must have quickly identified the public relations bonanza offered by the journalist’s killing and its potential to restore the Palestinians to the international stage after years of being relegated to the sidelines.

Israel is trying to leverage the Palestinian refusal to hand over the bullet for international supervised ballistics testing and conduct a joint post mortem to its advantage. “Our forces fired dozens of single, targeted bullets. The Palestinians fired hundreds and perhaps more of rounds wildly and indiscriminately. We do not rule out that Abu Akleh was killed by our forces, but the opposite possibility, that she was killed by imprecise rounds fired by the other side, is also completely plausible. When that is the case, those rejecting a transparent investigation in an international setting simply incriminate themselves,” a senior Israeli security source told Al-Monitor on condition of anonymity.

Unlike its operational battlefield advantages, Israel is at a distinct disadvantage in the court of public opinion. “People automatically identify with the weaker side,” the security source said. “We are fighting uphill, trying to prove our innocence. Let us not forget one basic fact: The IDF does not deliberately target journalists or civilians. On the contrary. Few armies in the world take such stringent precautions to avoid hitting civilians. We are ready for an investigation right now, in any transparent format. The other side refuses. It bears the burden of proof.”