The Israeli commission investigating the death of Palestinian child Muhammad al-Durrah should have been established in 2000, not last year. 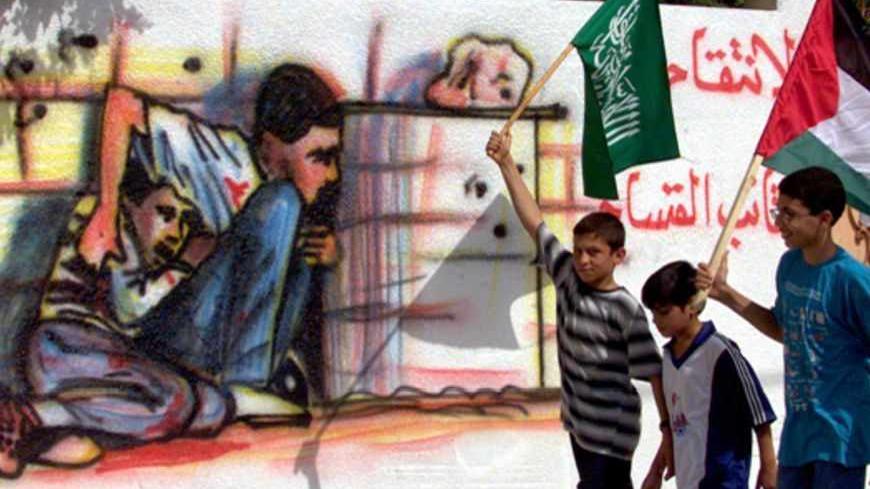 Palestinian boys carry Hamas and Palestinian flags in the Gaza Strip on Oct. 6, 2000, as they walk past graffiti showing the death of 12-year-old Muhammad al-Durrah, who was shot dead during Israeli-Palestinian clashes. - REUTERS

I checked the date again. No, I am not mistaken. It is May 2013 and an official commission of inquiry just submitted its findings to Israeli Prime Minister Benjamin Netanyahu as to who killed Muhammad al-Durrah, if he was, in fact, killed at all.

“Hold on,” I start to wonder. “It took them 13 years to investigate who killed that 12-year-old boy at the start of the second intifada?” Impossible. The Agranat Commission, which was established in 1973, in the wake of the Yom Kippur War, took just a year and a half to conduct its investigation, and published its findings in 1975. The Kahan Commission, another official commission of inquiry, which investigated the massacre in the Sabra and Shatila refugee camps [in Lebanon] in September 1982, took only three months to find that then Defense Minister Ariel Sharon bore ministerial responsibility for what happened there. Then there was the Winograd Commission which investigated the failures of the Second Lebanon War. It heard the testimony of hundreds of witnesses and examined thousands of documents, but it was also able to publish its findings in considerably less time — it was appointed in September 2006 and released a partial report in late April 2007.

How is it possible that a commission created to investigate Durrah’s death took 13 years to reach its conclusions? Were there that many witnesses to interrogate? Did the commission uncover incriminating new evidence, perhaps even a smoking gun of sorts that was heretofore unknown, and which cast the whole incident in an entirely different light?

Obviously, the commission of inquiry that was formed to look into the killing of Muhammad al-Durrah at the Netzarim intersection on Sept. 30, 2000, did not really spend 13 years conducting its investigation. It is also quite obvious to me that no one in Israel, or the world for that matter, was waiting with bated breath to hear what the commission had to say. In fact, very few people even knew that it existed.

The commission of inquiry was first created nine months ago (in September 2012) by Netanyahu and Minister Moshe “Bogie” Ya’alon, who then served as minister of strategic affairs in the office of the prime minister, but has since assumed the post of minister of defense. His previous position, unlike his current one, did not really leave him with many responsibilities, but it was located in the Prime Minister’s Office compound, where weighty decisions are made on a regular basis. That is where the government decides things like "should we bomb Iran or not?" or "should we attack the convoys carrying armaments from Damascus to Beirut?" When a minister’s very title implies that he focuses on matters deemed “strategic,” what can he actually do to add content to his post?

I am not arguing that there was no need to investigate the killing of the 12-year-old boy who became a symbol of the second intifada. The problem is the timing. It should not be done now, 13 years later. The narrative has already been etched into the Palestinian national consciousness, and nothing can change that, not even the conclusions of an official Israeli investigative committee. And it certainly does not help that its conclusions are based on meager findings derived from a video shot by the France 2 TV network.

If, on the other hand, someone would have provided indisputable evidence that Durrah was still alive, that would be a whole new story. Alternately, if someone would have found testimony by the Palestinian police that they were the ones who actually shot the boy, there would be good reason to revisit the case after so many years. Of course, none of that happened.

The former chief of Israel’s Southern Command reserve Maj. Gen. Yom-Tov Samia was the first to claim that it was not Israeli gunfire that killed Durrah. He based his conclusion on a comprehensive investigation that he personally led, which calculated the angle of the gunfire and the precise location of Israel Defense Forces (IDF) troops at the intersection during the incident. After collecting the evidence, he reached the verdict that the boy and his father were most likely hit by Palestinian gunfire. He provided a legitimate counterargument and presented it in real time, while the world was still outraged by images of the incident. What Samia did not conclude from his investigation is the ludicrous claim that “it was all staged,” and that Durrah is still “alive and kicking” somewhere in the Gaza Strip, like the Ya’alon-Steinitz Report insinuates.

This groundless claim was first raised in a documentary film by German journalist Esther Shapira, which aired in Germany in 2002. The film evoked considerable controversy which focused on the quality of her investigation. Many argued that the film had an agenda and was rife with inaccuracies. This all came to a head when the director stated with utter earnestness that there are people in Gaza who would swear that they have seen Muhammad al-Durrah alive. She provided no evidence to support her claim, whether oral or written, in person or on camera. She simply tossed out a statement that many Israelis hope to hear: Muhammad al-Durrah is alive and well, and all the brouhaha surrounding him is nonsense. It is just another cheap shot against Israel by Palestinian propagandists.

It is even more disappointing to discover that the Israeli government’s recent commission of inquiry actually makes a connection of sorts to this claim. Of course, it does not do so directly, but the insinuations are laid on thick and heavy. And then the commission expects people to take its report seriously …

During the second intifada, Israelis and Palestinians did not confine their fighting to blood-drenched battlefields. They also fought over the hearts and minds of the public, both locally and internationally. Both sides exploited shocking images from various events for their own propaganda purposes, to prove that the other party was the villain in the story. So, for example, the IDF released film clips of rocket launchers being taken out of Palestinian ambulances and supposedly wounded “victims” suddenly getting up on their feet, not knowing that they were being filmed by a drone soaring high above them. Still, to even think that the Palestinians were so prepared by the second day of that intifada that they could stage a propaganda film with so many extras and so many bags of actors’ blood is a little too much.

Since the second intifada, almost 7,000 Palestinians have been killed. There were also some 1,100 Israeli casualties of suicide attacks. Tens of thousands more were injured or suffer from post-traumatic stress disorder. There were also two major military operations in Gaza and thousands of rockets were fired at Israel. Of all the issues raised by this bitter conflict, someone decided that the one thing that demands an investigation is the death of Muhammad al-Durrah.

Once again, this raises the question: What was this commission actually hoping to achieve? Did it expect people around the world to start demonstrating in support of Israel? Maybe this investigation was intended “to show the real face of the Palestinians” (to paraphrase then Prime Minister Ehud Barak’s miserable comment after the Camp David summit). Maybe it was all intended to convince the Americans, the French, the British, the Germans and all the other Europeans who we are dealing with here. And we have not even mentioned Turkish Prime Minister Recep Tayyip Erdogan.

And so, 13 years after the incident, when the commission of inquiry presented its findings to Netanyahu on May 19, 2013, declared: “It is important to focus on this event, which was used to slander Israel. This is an example of the deceptive delegitimization campaign that Israel constantly confronts. There is only one way to fight against lies, and that is with the truth. Only the truth can stand up to the lies.”

Former Finance Minister Yuval Steinitz has since taken over as the new minister of strategic affairs. Since he, like his predecessor, has plenty of time on his hands in his new position, I would like to suggest a few other issues from the past that future commissions of inquiry could investigate. After so many years, we are bound to uncover the “truth” at last.