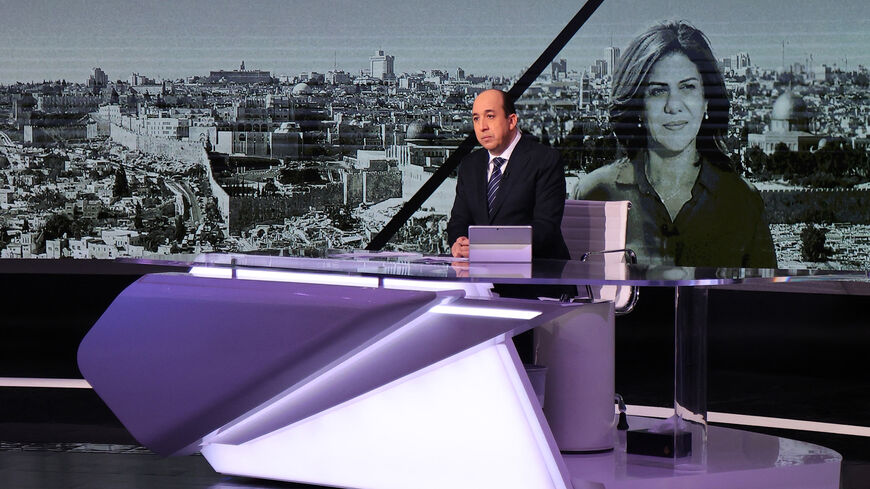 Al Jazeera's Moroccan journalist Abdel Samad Nasser broadcasts a report before an image of his network colleague Shireen Abu Akleh at the Qatari news broadcaster's main headquarters in the capital Doha on May 11, 2022. - KARIM JAAFAR/AFP via Getty Images

Israeli Foreign Minister Minister Yair Lapid tweeted this morning, "We have offered the Palestinians a joint pathological investigation into the sad death of journalist Shireen Abu [Akleh]. Journalists must be protected in conflict zones and we all have a responsibility to get to the truth." He posted again, "Israel's security forces will continue to operate wherever necessary to prevent terrorism and the murder of Israelis."

Abu Akleh was killed while covering an Israeli raid in the West bank Jenin refugee camp early this morning. Another journalist who was with her was injured and is currently hospitalized. The journalists wore helmets and vests signaling they were press.

The Palestinian Health Ministry said that Abu Akleh was fatally struck by a bullet to the head while her colleague Ali Samoudi, who works for the Jerusalem-based Quds newspaper, was shot in the back and is now in stable condition. Video footage from the scene shows her wearing a press vest and a helmet. She was apparently hit below the ear, in an area not protected by her helmet.

Al Jazeera immediately came out with a statement blaming the Israel Defense Forces for killing the correspondent.

Prime Minister Naftali Bennett said shortly after the news emerged of Abu Akleh's death that it was not yet clear who killed the journalist. Responding to a statement by Palestinian President Mahmoud Abbas qualifying the killing as “an ugly crime,” Bennett said Abbas is “throwing blame at Israel without any basis” and added, “According to the information we have gathered, it appears likely that armed Palestinians who were firing indiscriminately at the time were responsible for the unfortunate death of the journalist.” Bennett called on the Palestinian Authority to cooperate in a joint investigation into the journalist’s death.

According to Haaretz, Lapid then took up the matter with senior Palestinian Authority official Hussein al-Sheikh.

Clashes in Jenin began after IDF, Shin Bet and border police forces raided the area and arrested several people suspected of connection with recent terror acts, both in the refugee camp and in a number of other locations across the West Bank.

After the incident, the IDF issued a statement reading, “During the operation in Jenin refugee camp, suspects fired an enormous amount of gunfire at troops and hurled improvised explosive devices. Forces fired back with live fire.” IDF spokesperson Ran Kohav later told the Israeli public broadcaster Kan that he didn’t think Israeli forces killed her.

The spokesperson of Israel’s Foreign Ministry, Lior Haiat, said in a video message today, "We are saddened by the death of senior Al Jazeera correspondent Shireen Abu Akleh during heavy exchange of fire amidst a military counterterrorism operation in Jenin. A free press is fundamental for Israel and for all democracies, and as such, journalists must be protected. There are indications that Ms. Abu Akleh was killed by Palestinian terrorist fire. Israel will be conducting a thorough investigation. We call on the Palestinian Authority to cooperate with this investigation in order to get to the truth."

Abu Akleh will be buried in Ramallah on Thursday. Abbas is expected to attend the funeral.

by Murielle KASPRZAK and Joseph SCHMID | AFP | May 26, 2022
END_OF_DOCUMENT_TOKEN_TO_BE_REPLACED