The Turkish president says that while the two countries are invited to join NATO, the possibility of a veto remains if they don't keep their promises. 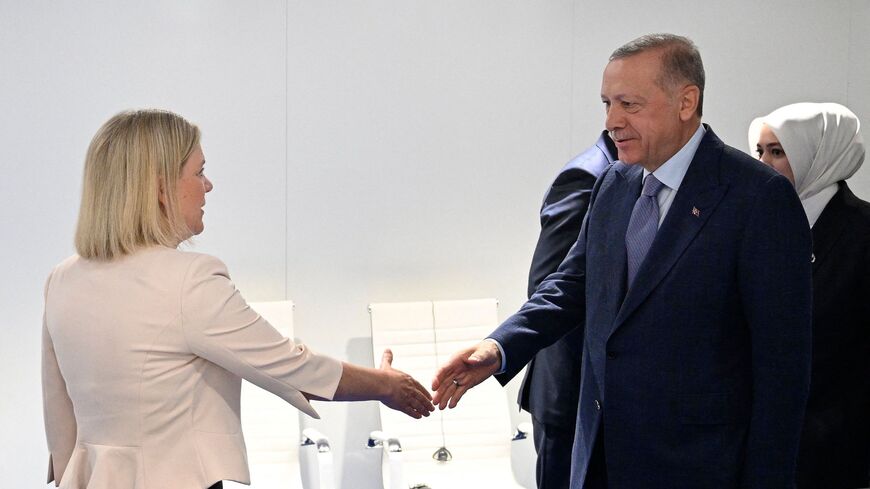 Turkey’s President Recep Tayyip Erdogan made clear that Sweden and Finland’s NATO accession was far from a done deal a day after shelving threats of a veto and allowing the Nordic countries' memberships to proceed.

“The agreement that was signed is just a beginning, an invitation. What is of essence is that promises that were made are put into action,” Erdogan said at a news conference in Madrid today on the sidelines of the NATO summit. He was referring to a document that he signed Tuesday with the Swedish premier and Finnish president in which both agreed to end their support for the Syrian Kurdish People’s Protection Units (YPG) and its political arm, the Democratic Unity Party (PYD), which Turkey says pose a threat to its national security. In exchange, Turkey agreed to withdraw threats to block their memberships in the alliance.

Why it matters: Turkey could still, in theory, put the kibosh on the Scandinavians because approval of their membership needs to be put before the legislatures of NATO states before becoming final. “This deal won’t materialize unless it's approved by our parliament,” Erdogan warned. “Sweden and Finland must remain faithful to their pledges; otherwise, it is out of the question that [their memberships] would be brought before [the Turkish] parliament.”

Erdogan said Turkey would be scrutinizing Finland's and Sweden’s actions with an eagle eye, adding that they had pledged to extradite 73 “terrorists” wanted by Turkey. Many are believed to be associated with the outlawed Kurdistan Workers Party (PKK) and the Pennsylvania-based Sunni preacher Fethullah Gulen, who is accused of masterminding the 2016 putsch to overthrow Erdogan.

However, it remains to be seen whether Finnish and Swedish prosecutors see eye to eye with Turkey on what defines a terrorist, and there are already loud grumbles from left-wing parties in Sweden. One is pressing for delisting the PKK as a terrorist outfit.

Biden effect: President Joe Biden, who met with Erdogan in Madrid yesterday, called the Turkish leader on Tuesday before doing so, ostensibly to convey the importance of letting Finland and Sweden join the alliance in the face of Russian aggression in the region.

That call, along with pressure from NATO Secretary-General Jens Stoltenberg on Sweden to accommodate Turkey’s demands, unlocked a two-month impasse. Turkey hailed the outcome as a win. In fact, Turkey saved itself from a further meltdown in its relations with Washington. Had Erdogan not relented, the Biden administration would have pulled its support for the transfer of F-16 fighter jets to Turkey, which needs to be approved by Congress.

Therefore, should Turkey revert to playing hardball on the Nordic accession, the administration could change its tune on the F-16s, as it may should Erdogan make good on his threats to invade northeast Syria again.

Biden denied any linkage, telling reporters there was no “quid pro quo” to sell F-16s to Turkey if it dropped its opposition on Finland and Norway. “I said back in December, as you recall, we should sell them the F-16 jets … modernize those jets as well,” Biden said. “I need congressional approval to be able to do that, and I think we can get that,” Biden added.

Getting to yes: Biden will need to persuade several dissenting senators, notably Sen. Bob Menendez (D-NJ), who is known to be the stiffest opponent of selling any military hardware to Turkey. Menendez has a large ethnic Armenian constituency and an ethnic Armenian spouse, Nadine Arslanian.

Turkey’s indirect military intervention on the side of Azerbaijan helping it defeat Armenia in a brief but bloody war in late 2020 will not have helped the senator’s mood.  Moreover, Turkey’s claims that it now wants to establish diplomatic ties with Armenia and reopen its sealed borders with the tiny landlocked nation are ringing increasingly hollow. Turkey has long said that it would only do so if Armenia withdrew from occupied Azerbaijani lands. Those lands — and more — were wrested back with the help of Turkish drones. Nearly two years on, the borders remain shut and diplomatic ties unestablished.