A US defense official called for a political process to end Turkey's perpetual battles with Kurdish militants. 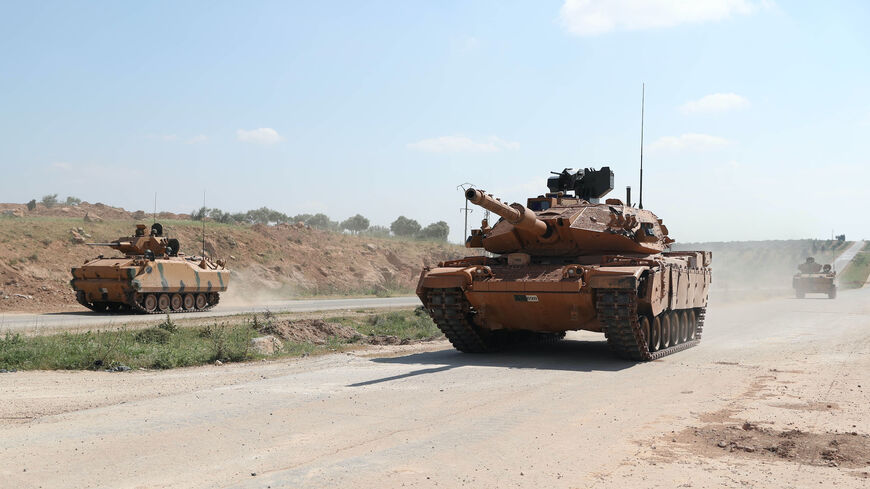 Turkish military tanks drive past the town of Ariha on the M4 highway in the rebel-held northwestern Idlib province, Syria, May 7, 2020. - OMAR HAJ KADOUR/AFP via Getty Images

The Pentagon warned on Wednesday about potential unintended consequences of Turkey's stated plan to launch a new attack against Kurdish-led forces in Syria.

“There are currently more than 10,000 ISIS fighters currently held in makeshift detention facilities across northeast Syria,” Stroul said during an event hosted by the Middle East Institute in Washington on Wednesday.

“These facilities are overpopulated, insecure and guarded by our partner force, the SDF, [which is] under significant pressure from multiple armed adversaries, a deteriorating economy inflamed by historic drought and a potential Turkish operation in northern Syria,” Stroul explained.

“We strongly oppose any Turkish operation into northern Syria, and have made clear our objections to Turkey specifically because ISIS is going to take advantage of that campaign — not to mention, the humanitarian impact,” she said.

The Pentagon official expressed understanding for Turkey’s “legitimate security concerns,” in reference to the YPG’s links to leftist Kurdish militancy inside Turkey, but she said any differences should be resolved through dialogue, not military action.

One step further: “I think it goes without saying that there is no military solution,” Stroul said of Turkey’s nearly four-decade fight with the Kurdistan Workers Party (PKK), whose leadership shares ties with the YPG.

“There does need to be serious consideration for a political process, and a dialogue,” she said.

“We have seen cyclical Turkish operations in both Iraq and Syria. I think there needs to be some serious thinking about what is achievable with military operations like this without a commensurate political and economic process.”

The context: IS was territorially defeated in 2019, by a US-led international militiary coalition allied with Kurdish-led militias called the Syrian Democratic Forces (SDF).

Underground networks of IS jihadis remain across Iraq and Syria, and the SDF plays a central role in uprooting them with US support.

IS jihadis also at times clash with Syrian government forces.

In addition to the more than 10,000 IS fighters housed in various jails under SDF watch, some 60,000 family members of IS fighters remain detained in camps, most of them at sites known as al-Hol and al-Roj.

IS fighters launched a surprise assault on the largest prison for jihadis in Hasakah this past January, sparking a more than weeklong battle that left hundreds dead, including many among the SDF. Most of the IS escapees and attackers were killed, the US military later said.

NATO ally Turkey has consistently objected to Washington’s support for the SDF over its leadership ties to the PKK. Painstaking efforts by American diplomats to alleviate Ankara’s concerns during the Trump administration led nowhere, culminating in a limited Turkish-led invasion that displaced some 300,000 people in northeastern Syria in October 2019.

In recent months, Turkey's President Recep Tayyip Erdogan has threatened another incursion, drawing objection from the Biden administration. The cities of Tal Rifaat and Manbij remain the likeliest targets, as Ankara seems keen this time to avoid areas where American troops are present.

Stroul said Wednesday that there is “no doubt” the jihadis would attempt new attacks on IS prisons if Turkey were to attack the SDF, as the Kurdish-led militias would pull forces from guarding the facilities to fight the foreign incursion.

“ISIS views the detention facilities where its fighters are housed as the population to reconstitute its army,” Stroul said. “It looks at al-Hol and al-Raj, and the youth in those camps, as the next generation of ISIS.”

What’s Next: The US-led coalition thinks Turkey could launch the incursion sometime after July 15, a person briefed on the matter told Al-Monitor.

The final decision, however, is Erdogan's. The Turkish president is expected to meet Russia’s President Vladimir Putin in Tehran next Tuesday to discuss the Kremlin’s blockade of Ukrainian seaports that has strained global food supplies.

The issue of Syria may come up. Russia, which backs Syria’s President Bashar al-Assad, has so far signaled some disapproval for Turkey’s incursion plans. While it is not clear that Russia’s forces in Syria could stop a Turkish incursion if ordered to, it remains to be seen whether Erdogan is willing to risk whatever costs Putin may decide to impose.