The US military says it opposes Ankara's plans to send ground troops against Syria's Kurds, but it has stood down in the face of similar attacks in the past. 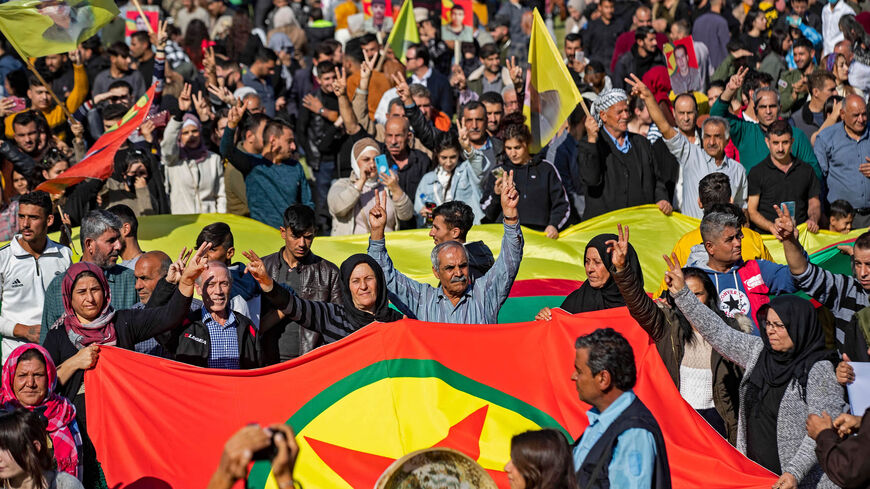 Syrian Kurds protest against Turkey and in solidarity with the Kurdistan Workers Party, in the Kurdish-held city of Qamishli, Syria, Nov. 13, 2022. - Delil Souleiman/AFP via Getty Images

A suspected Turkish drone strike hit a Kurdish-led militia base in northeast Syria on Tuesday, killing two members of a local US-backed Syrian counterterrorism unit and wounding three others, spokespeople for the group told Al-Monitor.

The strike hit the perimeter of the Syrian Democratic Forces' (SDF) base at Shamuka, which lies adjacent to the main US military base in the area some 45 kilometers from the Turkish border, a third well-placed source in Syria confirmed.

The sites have been known to house US diplomatic delegations and SDF commander Mazlum Abdi in the past, but it remains unclear if any such officials were present at the time of the attack. No US personnel were hurt in the incident, a defense official told Al-Monitor.

In a statement on Tuesday, the US-led coalition urged de-escalation in Syria, saying the strikes jeopardize the safety of civilians and the region's stability.

The drone strike on the SDF base came just a day after the Pentagon called for “immediate de-escalation” in response to Turkey launching dozens of airstrikes in majority-Kurdish areas of Syria and Iraq on Saturday night, in apparent retaliation for a bomb blast in Istanbul last week.

The Turkish military said its aircraft struck 89 targets across northeastern Syria and northern Iraq in a new operation dubbed “Claw-Sword.” President Recep Tayyip Erdogan yesterday said his government will soon launch a new deployment of ground troops into northeast Syria, a threat he reiterated today, renewing fears of a rekindled fight with Kurdish-led forces there.

Turkey's Defense Minister Hulusi Akar today called on the US to cut ties with the Syrian Kurdish forces in a speech to lawmakers in Ankara. Some 900 US troops remain in Syria, most of them in support of the SDF as they hunt down remaining Islamic State sleeper cells  in the country's northeast.

"We have consistently communicated our serious concerns to Turkey, in public and private, about the impact of escalation on our D-ISIS [defeat-Islamic State] goals and, often, the impact it has on civilians," a State Department spokesperson told Al-Monitor today.

"We have urged Turkey against such operations, just as we have urged our Syrian partners against attacks or escalation," the spokesperson said.

Erdogan’s government has blamed last week’s bombing in Istanbul on the Syrian People’s Protection Units (YPG), which leads the US-backed SDF militia alliance. Ankara considers the YPG to be inextricable from the Kurdistan Workers' Party (PKK), which is designated a terrorist group by Turkey and its Western allies for its intermittent four-decade insurgency against the Turkish state. Washington does not consider the YPG to be a terrorist organization.

Syrian Kurdish leadership has flatly denied any connection to the Istanbul bombing, but threatened retaliation for Turkey’s airstrikes over the weekend, which they said killed at least 11 people near the towns of Kobani, ad-Darbasiyyah and Derik. On Monday, at least three civilians were killed when rockets struck the Turkish border town of Karkamis, in Gaziantep. The Turkish government accused the YPG of responsibility.

“Over the weekend, we saw a wave of Turkish airstrikes in northern Syria and Iraq, and new reports of attacks by Syrian Kurdish forces into southern Turkey,” Pentagon spokesperson Lt. Col. Phil Ventura told Al-Monitor.

“The Department of Defense continues to oppose any military action that destabilizes the situation in Syria or violates Iraq’s sovereignty through military actions uncoordinated with the Iraqi government,” Ventura wrote in an email. “These actions threaten our shared goals, including to continue the fight against the Islamic State and make sure the group can never resurge.”

A spokesperson for Turkey's embassy in Washington did not return Al-Monitor's request for comment by publication time.

Why it matters: An incursion may or may not be imminent, but Turkey is signaling its willingness to launch one. In July, a Turkish drone bombed a youth education center just a few kilometers from the US-SDF base at Shamuka, killing five girls. That strike prompted a phone call between US Defense Secretary Lloyd Austin and his counterpart in Ankara, Hulusi Akar.

Pentagon officials have repeatedly warned that a renewed incursion by Turkey into Kurdish-held areas of Syria will destabilize the region and invite attacks by IS.

Some 10,000 captured IS fighters and more than 50,000 suspected family members remain in makeshift detention facilities across Syria's northeast in the wake of the US-led war effort to defeat the jihadist group.

“We strongly oppose any Turkish operation into northern Syria, and have made clear our objections to Turkey specifically because ISIS is going to take advantage of that campaign — not to mention, the humanitarian impact,” Dana Stroul, the Pentagon’s top Middle East policy official said in July.

"ISIS views the detention facilities where its fighters are housed as the population to reconstitute its army," Stroul said.

Last January, hundreds were left dead after the jihadis launched a coordinated assault on the main prison housing IS prisoners in the city of Hasakah. The jailbreak was contained after more than a week of fighting that included house-to-house battles – violence the city’s inhabitants had not seen in more than two years.

The Biden administration has helped Syrian Kurdish authorities fund new detention facilities to better secure the IS prisoners in hope that their indefinite detention can eventually be resolved through diplomacy and a political settlement to Syria’s war, but that prospect remains a long way off.

The Turkish government has launched three prior ground offensives against Kurdish-led forces in northern Syria over the past several years as it attempts to push the YPG away from its borders. Meanwhile, Turkish officials continue to object both publicly and privately to Washington’s partnership with Kurdish force.

Officials in Washington have long said their Turkish counterparts have not offered a realistic alternative for maintaining security and stability across Syria's northeast in the wake of the war against IS.

Ankara’s most recent incursion against the YPG in October 2019 initially displaced some 300,000 civilians and led to extensive allegations of war crimes against local populations by Turkey's Syrian Arab proxies.

What’s next: Erdogan on Tuesday suggested his government would soon deploy additional troops as well as tanks against Kurdish forces in Syria.

"We know the identity, personal record and location of every single terrorist in this area. Likewise, we also know very well who are guarding, arming and encouraging these terrorists," Erdogan said in a televised speech earlier today.

"It’s the end of the road for those who believe they can stall Turkey by pun games, by changing names of terrorist organizations, by sharing pictures showing their soldiers next to terrorists," Erdogan said.

Speaking to reporters from the White House on Tuesday, John Kirby, coordinator for President Biden’s National Security Council, said that “Turkey does continue to suffer a legitimate terrorist threat, particularly to their south. They certainly have every right to defend themselves and their citizens.”

But Kirby caveated that, saying Turkish strikes “might force a reaction by SDF that would limit or restrain their ability to fight against ISIS. We want to keep the pressure on ISIS.”

The Pentagon has thus far been more direct in its messaging.

“We oppose this move and call for immediate de-escalation," Defense Department spokesperson Ventura told Al-Monitor in response to the Turkish president's stated plans.

"We oppose all of the strikes from this on all sides," deputy press secretary Sabrina Singh told reporters from the podium today.

Yet just what that may mean is unclear. The US military has little leverage to prevent further Turkish incursion by virtue of its ground presence alone. American troops patrol a truncated sliver of Syria's far northeast after pulling back in 2019 from key border areas such as Manbij and Kobani, cities thought to currently be in Turkey's crosshairs.

Just hours ahead of Turkey's 2019 incursion, US forces were ordered to evacuate their outposts along the Turkish border so as not to risk hostile engagement with a NATO ally.

A Turkish incursion into Manbij or Kobani would penetrate areas under the influence of Russian troops, which support the regime of Syrian President Bashar al-Assad in Damascus. So far, there’s been no sign that Russia has given any hint of approval for Turkey’s move.

Alexander Lavrentyev, a senior envoy to President Vladimir Putin, urged Turkey’s leaders Tuesday to exercise “restraint aimed to prevent the escalation of tensions, not only in the northern and northeastern regions of Syria, but on its entire territory.” Russia’s military moved at least one Su-35 fighter jet to Qamishli airport in Syria’s far northeast in May in an apparent signal of disapproval of Ankara’s intentions.

Ilham Ahmed, co-chair of the executive committee of the autonomous region's Syrian Democratic Council, on Sunday confirmed reports that Turkish airstrikes had struck near Derik, a town squarely within the US military's area of influence.

With reporting from Elizabeth Hagedorn.

This story was updated for clarity and to include new developments.