Syrian Kurdish commander's plans to defend Kobani and Manbij have US military officials worried about security at prisons holding some 10,000 former IS fighters. 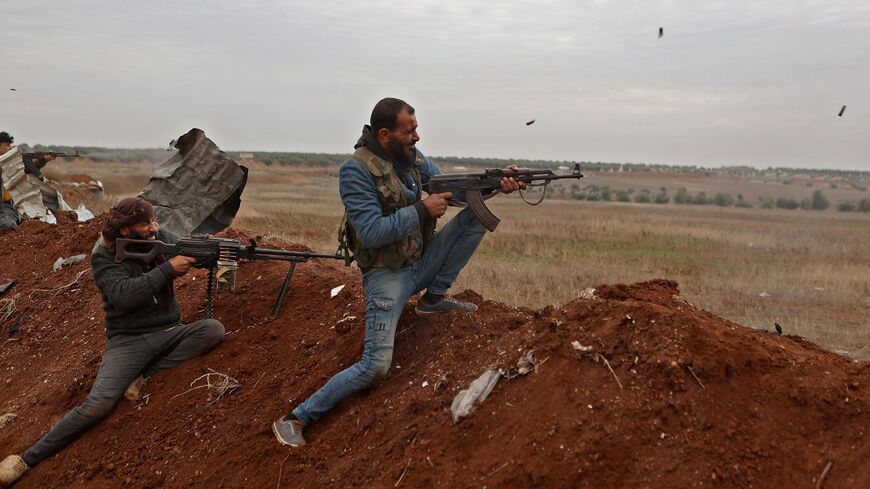 Fighters affiliated with the Turkish-backed Syrian National Army fire rounds while standing above a dirt barrier near Azaz in the rebel-held north of the Aleppo province, on Nov. 29, 2022. AAREF WATAD/AFP via Getty Images -

Concerns are running high in the Pentagon over Turkey’s threats to launch yet another military incursion against Syria’s Kurdish-led forces, officials said Tuesday, after warning last week that such a move would threaten the safety of American troops and efforts to contain the Islamic State.

The Kurdish-led Syrian Democratic Forces (SDF) said last week it had halted operations against IS amid preparations to resist a possible assault from Turkey. That has forced the US military to reduce its patrols alongside the SDF, Ryder acknowledged today.

Yet Ryder assured the military is still fully able to keep the lid on IS, and none of the roughly 900 American troops in Syria have been redeployed thus far.

“We would hope that there will be restraint, and that we can again as a coalition focus on the bigger threat at hand here, which is defeating ISIS,” Ryder said.

Turkey is a member of the US-led coalition to destroy the Islamic State, but sees the SDF — the coalition’s main partner force on the ground — as a terrorist organization inextricably linked to the Kurdistan Workers’ Party (PKK).

Turkish officials have urged US counterparts for years to end their partnership with the Syrian Kurdish force to no avail. The US does not consider the SDF to be a terrorist organization, though its leadership has ties with — and shares the left-wing political ideology — of the PKK.

Earlier this month the Turkish government accused the SDF of being behind a Nov. 13 bomb blast in a crowded Istanbul market, a charge which Syrian Kurdish officials have squarely denied. The SDF says it poses no threat to Turkey and seeks dialogue to prevent the expansion of the conflict.

Al-Monitor first reported today that US civilian officials have relocated from northeast Syria to neighboring Iraqi Kurdistan amid Ankara’s stated plans to launch another assault.

SDF commander Mazlum Kobane said earlier on Tuesday that he had intelligence indicating Turkey has begun amassing forces across from the northeast Syrian border cities of Manbij and Kobani, as well as between Manbij and al-Bab. Kobane also said Syrian opposition factions backed by Turkey had begun preparations between Tel Rifaat and Manbij.

Those areas lie outside the normal area of US military operations against IS and within the Russian military’s sphere of influence in Syria. Such a move could send hundreds of thousands of civilians fleeing and is likely to to destabilize the delicate battlefield balance between the US, Turkey, Russia, Syria, Kurdish forces, Iran-backed militias and the Islamic State.

Why it matters: US defense officials have declined to comment on potential Turkish preparations, refusing to acknowledge any intelligence they may have.

But a phone call planned for later this week between Defense Secretary Lloyd Austin and his Turkish counterpart Hulusi Akar suggests the apprehension in Washington has not abated.

That strike landed within 130 meters of American personnel, Al-Monitor reported last week. No other close calls with US troops have occurred since, a coalition spokesperson told Al-Monitor on Tuesday, but Turkish strikes on SDF sites and critical civilian infrastructure have continued.

“We have not seen signs of de-escalation,” the spokesperson wrote via email.

“CJTFOIR maintains critical de-confliction protocols with Turkey to protect coalition forces,” the spokesperson said, using an acronym for the US-led coalition in Syria and Iraq.

In a teleconference with Kobane earlier this week, coalition commander US Army Maj. Gen. Matthew McFarlane underscored concerns that the SDF chief's plan to redirect forces to defend areas threatened by Turkey leaves IS camps and detention centers particularly vulnerable, Al-Monitor has learned.

Kobane's response was not reassuring, according to two US officials briefed on the conversation.

“The SDF commander, Gen. Mazlum, has been clear that anti-ISIS missions are not the SDF’s priority at this time,” the coalition spokesperson said.

What's next: Turkey has launched three prior ground assaults to push the SDF away from its southern border. In each case, the Pentagon has refused to directly assist its partner force against its NATO ally.

It remains unclear what pressure Washington will bring to bear on Ankara to prevent another incursion.

Know more: US officials in Ankara and in Washington approached Turkish counterparts last week after the strike on Kobane's headquarters near Hasakah, Al-Monitor previously reported. Read that story here.