Erdogan vows to move forward with Syria operation despite objections from Iran, Russia 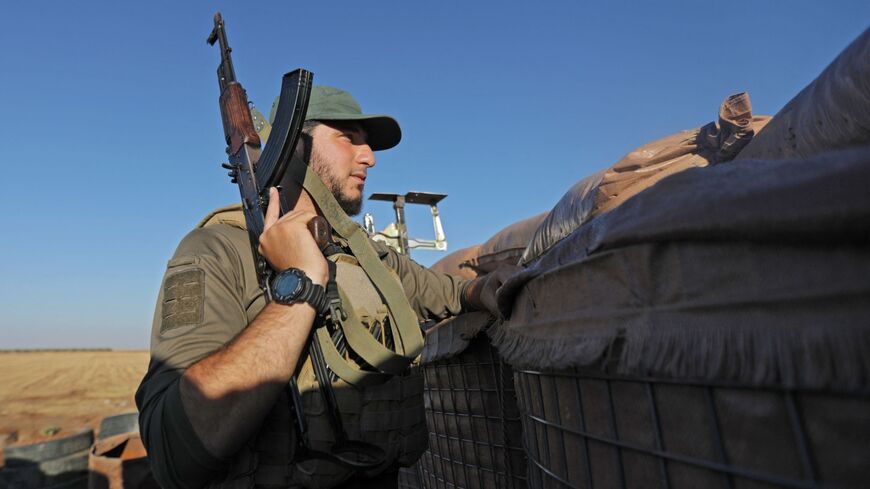 A Turkey-backed fighter looks out from a military position in the Syrian area of Jibrin in Aleppo's eastern countryside, towards the Kurdish-controlled area of Tal Rifaat, on July 19, 2022. Turkey is threatening a new offensive against Tal Rifaat and Manbij, two towns under the control of the People's Protection Units (YPG), a Kurdish militia accused by Turkey of being affiliated with the Kurdistan Workers' Party (PKK), classified as terrorist by Ankara. - BAKR ALKASEM/AFP via Getty Images

Turkey’s President Recep Tayyip Erdogan vowed today to carry out another military assault against US-backed Kurdish-led forces in northern Syria, despite statements of disapproval from major players in the conflict.

The Syrian cities of Tel Rifaat and Manbij “have become hotbeds of terrorism,” Erdogan alleged today, adding that “the time has come to clear” the cities of Kurdish-led forces which have controlled those areas for several years.

Khamenei today cautioned against Turkey’s planned incursion, saying it will harm Turkey and the region while benefiting “the terrorists” whom Erdogan seeks to rout. The Iranian leader instead urged dialogue between the Turkish and Syrian governments.  Damascus has also publicly opposed Ankara’s plans.

Russia, which along with Iran backs the Syrian President Bashar Al-Assad's government, also signaled disapproval. Moscow’s envoy for Syria, Alexander Lavrentyev, said his government was seeking to persuade Turkey “not to use force to solve the pending problems, but to try to find a solution through negotiations and dialogue,” state media reported.

Ankara does not have formal diplomatic ties with the Assad regime, but a 1999 agreement between the two countries requires the Syrian government at Turkey’s behest to move against Kurdish militants if they establish positions along the Turkish border.

The so-called Adana protocol remains the preferred route for Russia and Iran, which would like to see the Damascus regime recapture territory in Syria’s northeast which is held by US-backed Syrian Kurdish fighters.

The Kurdish-led Syrian People’s Protection Units (YPG) captured a swath of the country’s northeast roughly the size of Denmark with US military support during the multinational war against the Islamic State group. Those forces remain in place, though the US footprint has shrunk over the years.

Turkey has intensely objected to US support for the YPG, which oversees an alliance of anti-IS Syrian militias known as the Syrian Democratic Forces (SDF). Turkey’s government considers the YPG to be inextricable from the leftist militant Kurdistan Workers’ Party (PKK), which has waged an intermittent insurgency against the Turkish state since 1984.

The YPG and PKK share a common political ideology and some leadership ties, but the Kurdish-led Syrian militia insists it poses no threat to Turkey itself.

Turkey has launched three prior military assaults against the YPG in Syria in recent years. The latest, dubbed Operation Peace Spring in 2019, initially displaced some 300,000 civilians from their homes and resulted in multiple reports of war crimes.

Broad opposition. The United States is also sounding the alarm about Erdogan’s plans. Last week, a senior Pentagon official warned that another Turkish incursion against the YPG/SDF would risk destabilizing prisons which hold tens of thousands of Islamic State prisoners of war.

The SDF oversees makeshift jails housing some 10,000 captured IS jihadists and at least 60,000 of their wives and children. Earlier this year, hundreds of IS detainees escaped in a major jailbreak that took more than a week to contain and left several hundred dead, including among SDF fighters.

“We’ve made very clear that that sort of operation near us [US forces] will raise concerns about force protection,” the Pentagon official, Dana Stroul, said last week.

Strategic strain. The YPG issue is a major thorn in the side of US-Turkish relations, along with Ankara’s expulsion from the US-led F-35 stealth fighter jet program in 2019 over its purchase of Russia’s S-400 missile defense system.

The Biden administration has sought something of a reset with Turkey, inviting Ankara’s top diplomat to Washington earlier this year and praising Erdogan’s government for its support of Ukraine against Russian aggression.

But Erdogan’s threats to block Sweden and Finland from joining NATO have only further soured the mood in Washington. The influential chair of the Senate’s foreign relations panel, Bob Menendez (D-NJ), remains opposed to upgrading Turkey’s F-16 fighter jet fleet as a way to compensate the NATO ally for its expulsion from the F-35 program.

Following separate meetings with Pentagon officials led by Defense Secretary Lloyd Austin, and with Sen. Menendez on Capitol Hill today, Panagiotopoulos said “everything that needs to be done on a procedural level for [Greece’s] swift entry into this program is being done.”

Erdogan in May slammed Greece’s Prime Minister Kyriakos Mitsotakis after he appealed to Congress not to sell defense hardware to Turkey if it continues to violate Greek airspace.