Fires are among the leading cause of death among children of suspected Islamic State fighters who are stranded in the al-Hol and Roj camps in northeast Syria. 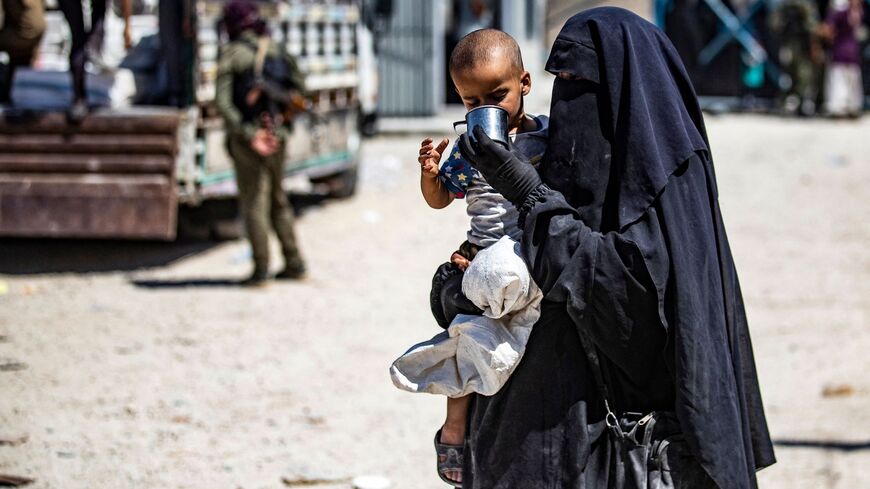 A Syrian woman helps a child to drink inside the Kurdish-run Al-Hol camp, which holds relatives of suspected Islamic State fighters in the northeastern Hasakeh governorate, on July 15, 2021. - DELIL SOULEIMAN/AFP via Getty Images

An average of two children die every week in a sprawling displacement camp in northeast Syria housing families with suspected ties to the Islamic State, Save the Children said, warning that young people in Al-Hol camp are “simply wasting away.”

Of the 163 people to have died in Al-Hol camp so far this year, 62 of them were children, the international NGO said in a new report. From January to mid-August, 79 residents were murdered, including three children who were shot to death.

Fires, including those caused by stoves and heaters used to cook and keep warm, are the most common cause of death for Al-Hol’s child population, the charity said. From January to September 2021, 13 children died in fires. Other leading causes of preventable deaths include poor water and sanitation, malnutrition and a lack of health care services.

Located in Hasakah province, the Al-Hol and Roj camps in northeast Syria house more than 60,000 people, the vast majority of whom are women and children. The camps are run by the Kurdish-led Syrian Democratic Forces, which ousted IS from its last Syrian stronghold in Baghouz in March 2019.

The under-resourced Kurdish-led authority in northern Syria has attempted to address the violence. In June 2020, it tried to count and register all who are living in Al-Hol.

In April, the US-backed SDF carried out a six-day sweep of the camp and arrested 125 people, mostly men, with suspected ties to IS. But the operations failed to stem the violence. Save The Children says there have been 32 murders and 10 attempted murders since then.

US-allied Kurdish forces have sounded the alarm, warning they are ill-equipped to handle the thousands of stranded families. But many Western countries are reluctant to bring home their nationals, with some having gone as far as to strip the citizenship of their citizens who joined the terrorist group.

Save the Children urged governments, especially those in Canada and Europe, to repatriate children in the camps and to recognize that those who were forced to join IS are victims of war.

"Many of the world's richest countries have failed to bring home the majority of their children,” the report said. "It is more urgent than ever that foreign governments with nationals in Al-Hol and Roj — many of whom fled their homes to escape IS — take responsibility and bring children and their families home."

In February, a group of UN human rights experts called on 57 countries, including the United States, United Kingdom and Germany, to repatriate their nationals stuck in the disease-ridden camps.

The already dire humanitarian situation has worsened since the closure of the Al-Yarubiya crossing on the Iraqi border, which had served as a vital supply route to northeast Syria before Russia forced the UN Security Council to close it in January 2020.

Making matters worse, Turkey-backed forces in the town of Ras al-Ain are accused of regularly causing disruptions at the Alok water station, which supplies water to Hasakah and other parts of northeast Syria.

The coronavirus, meanwhile, continues to be a major threat in the camps, where maintaining social distance and practicing safe hygiene is extremely difficult. Al-Hol and Roj have recorded 327 cases and 13 deaths, though Save The Children notes the actual case count is likely much higher.