Security risks continue to fester in the mostly desert terrain between Iraq and Syria, where the Islamic State conducts brazen attacks even as its alleged leaders are reported killed. 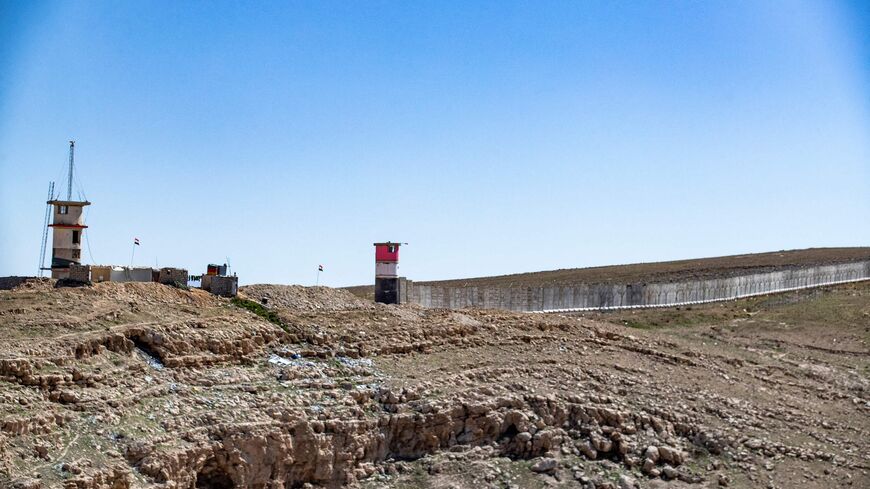 This picture taken on March 29, 2022, from the countryside near Syria's town of al-Hol in the northeastern Hasakah province shows a view of the concrete border fence being erected along the border. - DELIL SOULEIMAN/AFP via Getty Images

Both sides of the border between Iraq and Syria continue to experience attacks as concerns grow about tens of thousands of women and children in limbo, many of whom are exposed to Islamic State indoctrination, and joblessness heightens desperation. There is also a generalized distrust from a lack of reliable information.

In late June, IS claimed to have captured and executed a member of the Jughayfa tribe in Iraq’s northwestern Nineveh province and tribal fighters on the Syrian side of that border.

A statement issued by Iraq’s Popular Mobilization Units (PMU) on July 13 said an operation carried out at dawn in the “Sheikh Ibrahim Mountains and the Al-Mahalbia district, southeast of Tal Afar” had “found dens of terrorist gangs” in Nineveh province. No IS fighters were reported killed or captured.

Across the border in Syria, US Central Command Forces (CENTCOM) reported July 12 that it had conducted a drone strike targeting two top IS officials outside Jindayris in northwest Syria. The report stated that Maher al-Agal, who it called one of IS' top five leaders and the group's Syria head, "was killed in the strike,” adding, “Al-Agal was responsible for aggressively pursuing the development of [IS] networks outside of Iraq and Syria.”

The same day, in the Jazeera region straddling both countries between the Euphrates and Tigris Rivers, IS claimed it had killed a man in the town of Hawaij in the eastern part of Deir ez-Zor province who it said was a member of the Kurdistan Workers Party (PKK).

The Jazeera is an Arab-majority area under the US-backed, Kurdish-led Syrian Democratic Forces (SDF), dominated by the Kurdish People’s Protection Units (YPG). The YPG is closely linked to the PKK, and many people in the region refer to the Kurdish fighters from the group as PKK. The young man killed by IS, however, was an Arab from Dhiban, Deir ez-Zor.

The United States, European Union and Turkey all consider the PKK a terrorist group but the United States has long backed the YPG and the SDF in their fight against IS.

Many Arabs in the impoverished area have joined the SDF to support their families but have for years complained of discrimination, arbitrary arrests and other abuses against the local population under the SDF’s Kurdish leaders.

Many local Arabs say they are afraid of the PKK and IS as well as the Syrian government and its allied militias and do not know who to trust. IS frequently accuses local Arabs of passing on intelligence to coalition officials, as they know the terrain better than the non-local Kurds.

The July 12 victim was reportedly shot and killed at a football match in the local stadium, heightening concerns about the ease with which IS now seems to be operating in the area.

The Syrian province of Hasakah — mostly under the SDF though pockets are held by the Syrian government, which has long had mostly non-conflictual relations with the SDF and has at times coordinated with the Kurdish-led administration — hosts the infamous al-Hol camp with over 50,000 mostly women and children, many of them linked to alleged IS fighters.

Both Shami and his predecessor Mustafa Bali have repeatedly been criticized for spreading disinformation, such as claiming Syrian Arab opposition members are in terrorist groups when they are not. Bali had notably falsely claimed in a tweet that received hundreds of likes that a protagonist in an award-winning documentary had appeared in a video “beheading a Palestinian child.”

Ahrar al-Sharqiyah commander Abu Hatem Shaqra instead claimed in messages to Al-Monitor that his group obtained information on Agal’s importance within IS from people it had detained and had been actively been searching for the man killed in the CENTCOM strike for some time and that the man targeted had never been linked to his faction.

Shaqra and the fighters under him are Arabs from Deir ez-Zor and other areas in eastern Syria now under the SDF and/or the Syrian government. They cannot return to their home areas so long as the SDF remains in control, they say. The group has over the years gained a reputation for brutality and was sanctioned by the United States in 2021.

Shaqra confirmed to Al-Monitor what CENTCOM had stated: that at the time of his killing, Agal had been the head of the group’s operations in Syria.

In a series of messages in response to questions, Shaqra said that Agal's family had been well known for their previous links with al-Qaeda and that they were originally from a rural area near Suluk in the Raqqa province close to the border with Turkey.

Further south on the Iraqi side of the border, explosions in the early morning hours of July 14 in the Husaybah area of the Qaim district in Iraq’s western Anbar initially raised alarm.

A local source from one of the tribal PMU told Al-Monitor in a message on July 14 that the explosion was of a weapons depot of another tribal PMU forces, known as Kataib al-Hamza, which fought against IS but which also has tense relations with Iran-linked groups operating in the area.

Kataib al-Hamza had not responded to a request for further details about the explosion by the time of publication.

Further issues for both sides of the border are joblessness and growing drug use and trafficking.

Al-Monitor has reported extensively on alleged drug smuggling by Iran-linked groups in and south of Qaim but there has been little written on this issue in the area in the northern section of Iraq’s border with Syria, in Nineveh province.

According to a July 6 report by the Center for Civilians in Conflict (CIVIC), “A farmer from the Ba’aj area of Nineveh interviewed by CIVIC estimated that half of the young people in his area are now working in the drug trade or using drugs and alcohol.”

Joblessness, growing drug use and desperation could foster recruitment into outlawed groups including IS, especially in outlying rural areas where much of the population feels abandoned on both sides of the Iraqi-Syrian border.