The Islamic State is suspected of once again setting fire to farmland in the disputed Iraqi-Kurdish territories. 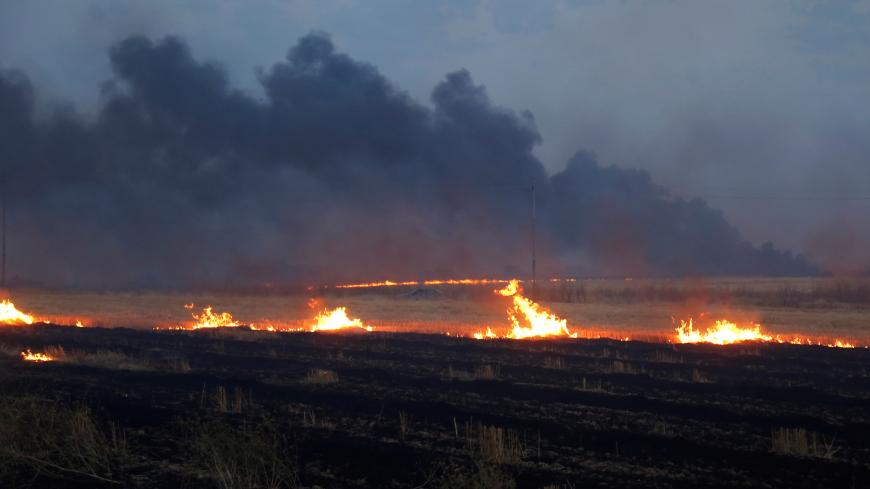 A file photo shows fire and smoke rising from a wheat field on the outskirts of Mosul, Iraq, June 15, 2019. - REUTERS/Abdullah Rashid

Crops are burning in northern Iraq’s disputed territories again and locals are mobilizing to fight the suspected culprit, the Islamic State.

A local commander in the Iran-backed Popular Mobilization Units (PMU) said there were massive fires yesterday in Makhmour, south of Mosul and the Kurdish capital Erbil.

Makhmour is one of the disputed northern Iraqi territories claimed by both the federal government in Baghdad and the Kurdistan Regional Government (KRG) in Erbil. IS took several of these territories, which are also in and around oil-rich Kirkuk and north of Mosul, in 2014. The Kurdish peshmerga defeated IS in many of them, but lost the areas in 2017 to Iraqi security forces after the Kurdistan independence referendum.

IS lost its final territory in Iraq in 2017, but has remained active since then and appears to be getting stronger. In April, during Iraq’s coronavirus lockdown, IS switched tactics from hitting small villages to attacking Iraqi forces directly, including near Baghdad.

Footage obtained by Al-Nujaba TV showed large flames engulfing the sides of mountains in Makhmour. The fires began the night of May 11 and burned into the morning of May 12.

Similar fires occurred last year throughout Iraq’s disputed territories, and farmers in Mosul are afraid it will happen again.

IS is suspected of starting the fires, but it is possible they are not the only arsonists. IS claimed credit for some of the fires last year, but some Kurdish farmers near Kirkuk told Al-Monitor that they suspected Arab farmers of burning their crops under IS’ name.

The disputed territories are extremely religiously and ethnically diverse. The region is home to Arabs, Kurds, Turkmens, Yazidis, Shabak, Assyrians and Syriacs. The Muslims are divided into Sunni and Shiite communities. There are high tensions between some residents. Some Kurds want the KRG to return to the disputed territories, while other Arabs, Turkmens and Shabak support the PMU and federal control, for example.

There have been displays of opposition to IS in the disputed territories following IS’ recent increase in attacks. In Hawija, south of Kirkuk, hundreds of tribal fighters grabbed guns and began a mass search for IS in the desert alongside the PMU and other Iraqi forces.

Most recently, IS reportedly killed two Kurds in a village in Diyala province on Sunday.