New Kurdish militias are forming from the remnants of defunct ones to renew the fight with the Iraqi army and the Popular Mobilization Units. 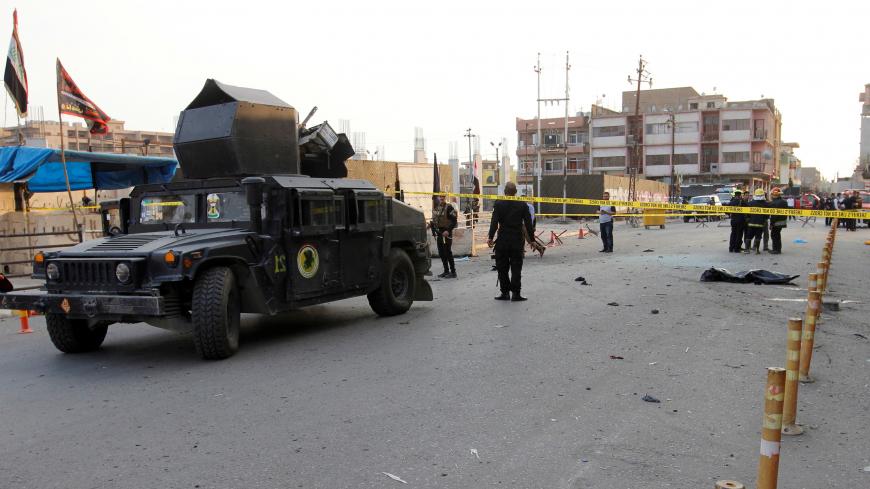 A military vehicle of Iraqi security forces is seen at the site of a suicide bomb attack, Kirkuk, Iraq, Nov. 5, 2017. - REUTERS/Ako Rasheed

The myriad armed groups in Iraq are constantly emerging, merging and dividing. The list is as mutable as everything else in the country. Get ready to add some more names.

Iraqi security sources told Al-Hayat on Dec. 18 that a new group has formed called Khawbakhsh, which is Kurdish for “volunteers.”

The group calls for the "liberation" of Kirkuk and Tuz Khormato from the Iraqi army and the Popular Mobilization Units (PMU), which recaptured those areas from Kurdish forces in October. Khawbakhsh has been accused of shelling houses Dec. 5 and targeting federal forces.

This development came in tandem with news about recently formed anti-Shiite armed forces in the areas surrounding Tuz Khormato, numbering about 1,000 and lending credence to forecasts that new armed groups would emerge after the Islamic State was defeated in Iraq.

These developments have led Iraqi Prime Minister Haider al-Abadi to order a special operation in Kirkuk to confront the increasing terrorism in the province. On Jan. 3, before an operation that day, he acknowledged the ongoing security challenges in Iraq, despite the pronouncement of victory over IS last month. Following Abadi's statement, Iraqi security forces conducted several raids against suspected sleeper cells in the provinces of Kirkuk and Diyala and the city of Mosul.

Parliament member Jassem Mohammed Jaafar told Al-Monitor, “The so-called Khawbakhsh group consists of several armed groups headed by Koran Jawhar and Jawhar Kajagji, who are close to the Patriotic Union of Kurdistan [PUK], as well as gunmen living off oil theft and blocking roads." The PUK, however, has denied denied that Jawhar has any status in the party.

Jaafar, whose State of Law Coalition has close ties to the prime minister, added, "All of them are Kurds who receive direct support from the government of Erbil,” where the Kurdistan Regional Government (KRG) is based. “The group’s main goal is to undermine security in Tuz Khormato and the disputed areas, to force non-Kurds out and prepare to restore Kurdish influence."

However, PUK parliament members have rejected Jaafar’s statements, saying they consider them part of a systematic campaign targeting Kurds in south Kirkuk that includes bombing their houses and arresting them arbitrarily.

An informed Kurdish source who asked not to be named told Al-Monitor, “The Khawbakhsh group has protected the Kurds against the Arabs and the Turkmens in Tuz Khormato and the disputed areas in Kirkuk since the Kurds were displaced by PMU-affiliated Turkmen and Arab groups.”

Kurdish forces arrested hundreds of IS soldiers, but none have been handed over to federal forces or tried in the region.

The PMU launched military campaigns in mid-December in the mountains overlooking Tuz Khormato, according to PMU leader Mohammed Mahdi al-Biyati. “Khawbakhsh includes former members of IS, mostly Kurds, who reorganized in a group that upholds their ideology and style in terrorizing society,” Biyati told Al-Monitor.

However, Biyati does not believe those groups pose as great a threat as IS, as the PMU has gained a great deal of experience and competence in dealing with such organizations. Nevertheless, Khawbakhsh and similar groups could still spread to other areas such as Diyala province to the south.

Security analyst Fadel Abu Raghif told Al-Monitor, “The emergence of these groups coincided with two separate events: the defeat of IS in Mosul and other areas it had occupied since 2014, and the recapture of Kirkuk from the Kurds by the Iraqi army and the PMU on Oct. 16.”

He added, “Preliminary estimates indicate that the number of fighters in these groups is still limited. Their speeches are incoherent and their activities do not suggest they are in control."

Abbas al-Adrawi, a researcher in the Hamorabi Center for Strategic and Security Studies, told Al-Monitor, “These groups, including Khawbakhsh, are fighting in unstable areas. They include Naqshbandi fighters and the remnants of Saddam [Hussein]’s army, as well as drug-smuggling gangs.”

Adrawi explained why he believes the number of such fighters is increasing: “Many IS elements turned themselves in to the Kurdish forces without fighting in the military operations during the liberation of Mosul, Sinjar, Tal Afar and Hawija. Today, those fighters are being rehabilitated and deployed on the front lines to face the federal forces, or sent to [help] form and join the Khawbakhsh group, which takes orders and support from the Kurdish military leadership."

Kurdish writer Shaal Mal Adel Salim has a different view. “Khawbakhsh and other similar groups include fighters from the areas affected by the policies of the Baghdad-based central government and the violence employed by the Iraqi army and the PMU in Kirkuk and the areas from which the Kurdish peshmerga forces withdrew,” Salim told Al-Monitor.

Many of those people felt abandoned when the peshmerga — the armed forces of Iraqi Kurdistan — pulled out as central government forces arrived in October to take back the disputed territory in response to the KRG holding an independence referendum in September against Baghdad's wishes. The disputed territory is land the Kurds had won in battles against IS.

Salim refused to call these citizen-fighters terrorists. They make up “a group of armed volunteers who announced the resistance after the withdrawal of the peshmerga forces from their areas, which they considered a betrayal," he said. "They believe it is their duty to defend their land and people after the federal authority took control of their Kurdish areas."

Ministry of Interior spokesman Brig. Gen. Saad Maan said the threat from these new armed groups has been exaggerated.

“Some parties who are taking advantage of what is happening are being hyperbolic when it comes to these groups and their influence on the ground," he told Al-Monitor. He declined to discuss the real number of these groups and the extent of their geographical spread, saying that information is classified. He did say, “The intelligence services have determined the size of the group and the extent of the threat they pose. The security forces have begun to deal with them.”

Armed groups like Khawbakhsh will continue to emerge and be active in Iraq until the political, social and economic causes behind them are addressed.