Iraq's agriculture sector has been revived in the past few months, after the government closed its borders and banned the import of agricultural produce as a preventive measure against the coronavirus outbreak. 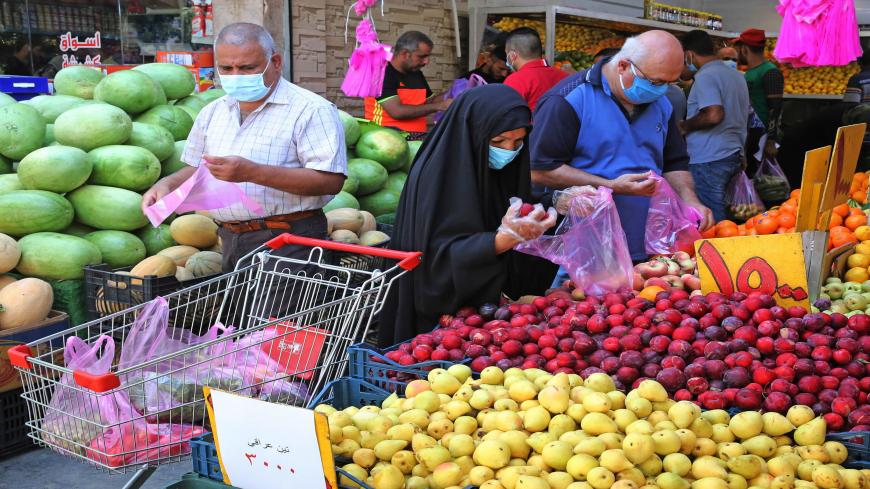 Iraqis, some wearing a protective mask amid the coronavirus pandemic, buy fresh produce from a street seller at a market in Karrada, in the capital Baghdad, Iraq, July 14, 2020. - AHMAD AL-RUBAYE/AFP via Getty Images

Closing the Iraqi borders due to preemptive measures against the coronavirus has helped revive Iraq's agriculture sector and expand the work of Iraqi farmers who have increased their production to supply the Iraqi market, which had been relying on imports for 17 years.

Production has been so great that Agriculture Minister Mohammad al-Khafaji announced July 13, “a demand to export tomatoes, eggplants and potatoes at a quantity of 500 tons per crop. Several countries want Iraqi agricultural products, including meat.”

On July 11, the Iraqi Ministry of Trade announced self-sufficiency from the wheat that Iraqi farms produce; Iraq had been a main importer of grains in the Middle East.

The border closing coincided with the control of military forces over border outlets and their quest to close unofficial outlets that allow the entry of agricultural products from Iran. Therefore, controlling the borders was a positive step, according to the Iraqi Ministry of Agriculture.

Ministry of Agriculture spokesman Hamid Nayef told Al-Monitor, “The ministry supported farmers by paying their dues and offering them plans promoting Iraqi agriculture. Iraq might opt for exporting abroad in the next stage.”

He added, “Controlling border outlets and limiting smuggling will give Iraqi agriculture a bigger chance to prove its power and quality in the markets.”

Iraq has 32 border outlets, the most active of which is the one with Iran and Turkey. Iranian markets export around $3 billion of agricultural products to Iraq each year. Meanwhile, Iraq has 32 million dunams (7.9 million acres) of arable lands.

Farmers said in press statements that “closing the borders this season gave a golden opportunity to Iraqi farmers to market their local produce. We do not ask much of the state, but we ask for simple things to support the agricultural process. The local product is considered better and cheaper than the imported one because of lack of competition.”

Three months after the borders were closed, the Iraqi Ministry of Agriculture announced self-sufficiency with 28 agricultural products. This is the first time in 17 years that Iraq achieves this number.

Iraq can save billions of dollars if it reaches self-sufficiency in staple crops, and it can support the state budget that mainly relies on oil — a reliance that Prime Minister Mustafa al-Kadhimi said “was a failure.”

Sources at the Ministry of Agriculture told Al-Monitor on condition of anonymity, “The unofficial outlets through which crops are smuggled constitute another issue that would harm Iraqi agriculture.”

According to information obtained by Al-Monitor, the mechanism of action of these unofficial outlets that are mostly in the Iraqi Kurdistan Region consists of allowing the entry of agricultural crops to Iraq, changing the date and place of production, and turning them from imported to local. Their prices are mostly less than those of the local Iraqi product.”

The head of the Agricultural Cooperative Associations in Iraq, Jabbar al-Assad, told Al-Monitor, “There are 15 outlets in Iraqi Kurdistan through which Iranian and Turkish crops enter the Iraqi markets in all provinces and ruin the Iraqi farmers’ production.”

In light of this, the Ministry of Agriculture at the federal government banned the entry of 27 crops from Iraq's Kurdistan Region June 23.

However, press statements discussed until May the entry of trucks to Iraq through unofficial outlets from Iraqi Kurdistan, passing through the federal government and bribing security officers to cross, despite the authorities’ ban.

The parliamentary Agriculture Committee supports the efforts of farmers in developing their work by asking the government to ban importing crops and to refrain from including any section about animal and agricultural crops in any agreement between the government and another state in order to ensure the continuity of local agricultural produce, self-sufficiency and exportation of the surplus.

The Food and Agriculture Organization commented on the situation of Iraqi agriculture saying, “The successive wars and civil unrest and the years of economic sanctions have suffocated agricultural produce in Iraq. Farmers had a shortage of good seeds and fertilizers, and cattle breeders had to sell their cattle or leave it behind.”

Iraqi farmers complained about Iraq’s government policies that relied on importing for 17 years, and they called on it to keep the borders shut to imports and to support Iraqi farmers who have suffered for many years.

The Iraqi government now has the chance to support its national produce and prove its quality against the imported products that have taken over Iraqi markets for more than a decade and a half, thus burdening the economy with huge losses. The Iraqi economy is still considered “consumerist.”

No matter how much governmental support there is for the agricultural sector, it can be easily targeted and inappropriately marketed. Even with self-sufficiency, unofficial imports will remain a huge barrier threatening Iraqi agriculture that has begun to breathe again after years of suffocation.