Flooded with imported goods, the Iraqi market is grappling with a serious lack of local products, due to the displacement of farmers, lack in government control and almost absent support for the domestic industry. 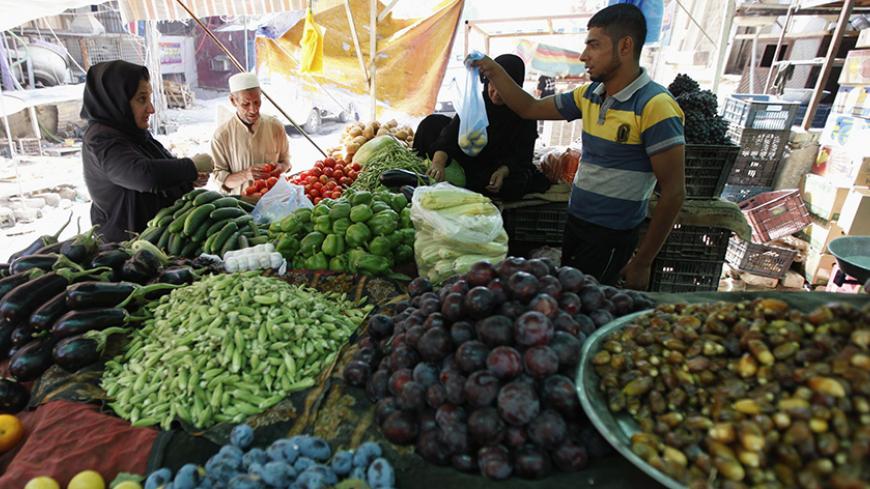 BABIL, Iraq — Qasim al-Rubaie, a teacher from Babil province, told Al-Monitor in front of a grocery store, “You will not find any Iraqi grown vegetables and fruits. Instead you'll find imported goods from Jordan, Turkey, Iran and the Gulf countries.”

In fact, Iraqi agricultural products are not found in many local grocery stores, as if Iraq is no longer producing food products. The same applies to locally manufactured products, such as tissues, luxury items and drinks, which cannot be found in the markets. Yet, markets are overflowing with all sorts of imported goods.

This phenomenon is not new, according to Alaa Najm, a merchant. He told Al-Monitor, “The presence of domestic goods in the markets began to decline in the late 1980s. The reason for that was the former regime’s military expenditures. Then agricultural and industrial production decreased, and the government’s support for these sectors vanished, factories became obsolete and agricultural land reclamation projects no longer exist.”

Najm began traveling to China in 2003, along with hundreds of Iraqi retail and wholesale traders, to import goods at a cheap price. Because of the traders’ import activities, foreign products have become abundant on the Iraqi market, in the absence of mechanisms to protect local production, obsolete production techniques and an unimplemented customs tariff law on imported goods.

In an interview with Al-Monitor, Maytham Elaibi, an economist and academic researcher at the University of Baghdad, said that the major collapse in the domestic production of goods is attributed to “the economic policies that have failed to support factories and farm owners in making their products profitable.”

Elaibi said, “The low salaries have prompted workers to move from the private to the public sector, which increased disguised unemployment, which is unproductive.”

According to Elaibi, “Under the trade policies [which have been adopted] of 2003, the border has been open and the customs tariff system controlling the entry of foreign goods has been canceled.” He added, “The subsidies policies have not encouraged the establishment of a real industry. Rather, they have encouraged dependency on government projects, which created a ‘parasite class’ that lives off unproductive contracting.”

Iraqis do not only suffer from the absence of local goods, but also from widespread low-quality imports. They accuse traders of importing cheap commodities at the expense of quality, to realize the greatest possible profits. These practices were confirmed by China's commercial attache in Iraq, Wang Xi Tong, who blamed the Iraqi traders of “importing poor-quality products.

The low-quality imports now also include medicines. There are multiple complaints and protests demanding to hold accountable the importers of poor-quality and expired medicines that have killed many citizens. In the city of Karbala, citizens complained about low-quality imported products. On Feb. 2, protests took place in Basra, southeast of Baghdad, demanding that the market be revitalized with locally made products. Member of the Council of Representatives of Iraq Hamam Hamoudi called on March 18 for buttressing the local industry with locally made products to boost the country’s economy.

In this context, Salama al-Salhi, cultural consultant to the prime minister, told Al-Monitor, “Since 2003, the Iraqi market has been wide open to the entry of goods from various origins and of bad quality.” Salhi attributed the low-quality products to “the absence of quality control and consumer protection laws,” and the declining industrial and agricultural production to “the displacement of farmers to the cities because of desertification and their integration into the ranks of the armed forces. Moreover, paralyzed production of electricity and lack of government support for the domestic industry were behind the importation.”

Salhi's statements in regard to the lack of national commodities in the Iraqi markets are supported by Mohi al-Masoudi, an economic researcher from Babil. He spoke of different reasons, namely “the war, occupation, terrorism, corruption and huge oil rents,” and said, “The cost of local agricultural and industrial products is higher than the selling price in the absence of subsidies.”

Masoudi did not rule out the presence of “political goals behind the lack of advancement of the Iraqi production.” He added, “A war is being waged against Iraqi products, in favor of [products from] countries such as Iran, Turkey and Saudi Arabia, which benefit from Iraq as a market consuming their goods.”

Government statistics show that Iraq’s imported goods are worth $65 million per year.

Ahmed Hashim Habobi, an engineer, told Al-Monitor, “In 2003, the year when Saddam Hussein’s regime was ousted, we witnessed a horrible collapse of the Iraqi industry, given the lack of electricity that is necessary for the operation [of factories] and declining security situation, particularly in the industrial areas bordering the cities.”

Saleh Sayyid Bakr, a political analyst, author and columnist for the online newspaper Elaph, spoke to Al-Monitor about the reasons behind the deterioration of agricultural and industrial production in Iraq. He said, “The security and political situations, the scarcity of expertise and treaties necessary for the advancement of the country and the lack of construction projects have prevented the development of Iraqi products.”

The interviewees mentioned many reasons behind the lack of competition between local and foreign goods. Yet, a stable security situation remains a key factor to achieve development. Without it, all of the attempts to develop production capacities will be in vain.