Struggling to make ends meet, Iraqis have innovated a new means to transport goods and people for little money, which has been competing with taxi drivers. 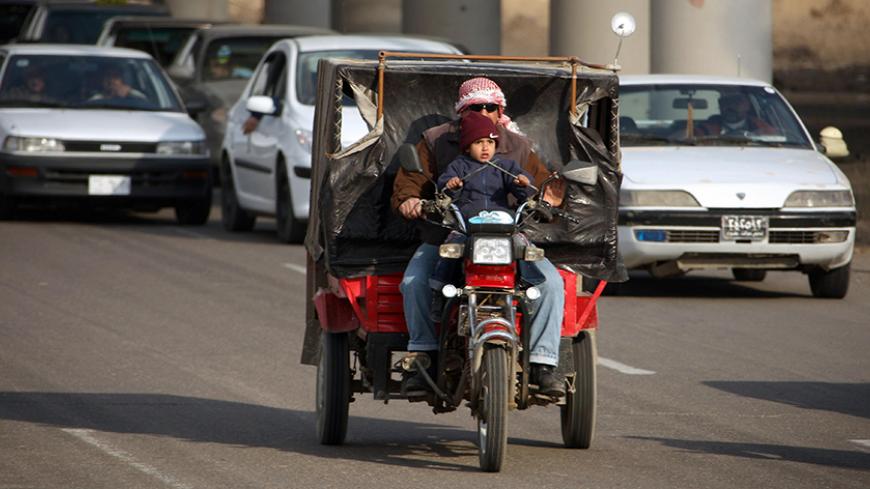 An Iraqi man and a child ride a three-wheeled "satouta" through the streets of Baghdad, Feb. 20, 2008. Satoutas are commonly used as shuttle taxis or to transport goods. - Getty Images/Patrick Baz

BABIL, Iraq — In blacksmith shops and car garages, Iraq’s deliverymen and unemployed youths are building a local transport vehicle called a satouta (shuttle). It is the latest invention created by Iraqis to make a living and fight poverty.

The shuttle consists of a cart pulled by a motorcycle. Adel Mahmoud, a mechanical engineer in Babil, told Al-Monitor, “It is a hybrid vehicle that did not undergo scientific tests in durability or security and is being manufactured even at home, without quality control procedures.” He added, “This vehicle cannot adjust its balance on sharp turns, as it often travels at high speeds that are not in line with its technical and mechanical capabilities."

This explains the increasing number of accidents caused by these small vehicles. The number of victims resulting from accidents is on the rise, according to Babil traffic enforcement officer Ali Hussein. He told Al-Monitor that there are no official statistics on the number of victims, “but this has become a noticeable phenomenon among Iraqis and it should not be ignored.”

He added, "Every day either a shuttle turns upside down or gets into an accident, and people lose their lives.”

The controversial vehicle is invading the streets of Iraq’s cities. In Babil, 100 kilometers (62 miles) south of Baghdad, the shuttles crowd the streets and can be seen in residential neighborhoods where their drivers park them next to their homes.

Majid al-Khafaji, an activist with the Labor Union in Babil, told Al-Monitor, “They are cheap and cost no more than $1,200 each. They are small and easy to drive, and can be easily maneuvered through the narrow alleyways of residential neighborhoods. This is why many people have bought these shuttles — especially the unemployed who prefer making a living by transporting [and delivering] products."

Al-Monitor spoke with Murad Hussein, who drives a satouta. Hussein, 18, said, “I wake up early, around 7 a.m., and drive my shuttle around the popular markets in Babil where I pick up products from people’s homes or traders’ warehouses.” He works until 4 p.m. and makes $30 per day.

Hussein, who does not have a driver's license, worked as a construction worker and waiter to save up $700 to buy his shuttle. “A lot of drivers, even those who drive huge trucks in Iraq, have become accustomed to not caring about obtaining a driver’s license,” he said.

“The fact that this shuttle is easy to drive and cheap to buy makes it extremely popular, thus creating competition between drivers on who can pick up the most people and products, which has led to a decrease in income for those in this profession [deliverymen and taxi drivers],” Hussein added.

The shuttles have invaded Baghdad’s commercial markets, such as Shorja, Sadrieh, Kifah and Jamhouriya neighborhoods and the squares of al-Khalani and Wathba, and nothing can compete with the shuttles in these crowded areas. The chaos on the streets, the lack of traffic enforcement and the constant sense of the deteriorating economic conditions are pushing the authorities to turn a blind eye.

In light of poverty and lack of a proper law, these shuttles seem to be addressing many issues. Saed al-Karkhi, a shuttle driver in the Alawi neighborhood in Baghdad, said, “This vehicle is the source of my livelihood; traders and shopkeepers book appointments for the following day for me to pick up their goods.”

Karkhi told Al-Monitor about the advantages of this vehicle compared to how things were in the past. “It is certainly better than the traditional method of transporting goods by donkey or carriages or on the workers’ backs for long, painful distances.”

Al-Monitor visited the industrial district in Hilla, Babil governorate, to check out the technology that turns motorcycles into shuttles. Blacksmith Hamid Farooq refused, however, to share the technical details behind the construction of the shuttles, as he considered it a trade secret that must be kept. Instead, he explained how these vehicles became so popular.

“These shuttles emerged in Iraq in 2004, a year after the fall of Saddam Hussein's regime. Back then, the new political conditions and commercial relations with neighboring countries allowed the importation of motorcycles, which before were rare in Iraq due to the economic blockade. These motorcycles were then turned into small vehicles,” Farooq said.

While the shuttles were initially used for the transportation of products, they now also serve other purposes. In cities of religious significance, such as Karbala and Najaf, the shuttles have become the most practical and affordable way to take around those visiting the holy shrines, especially the elderly who have trouble walking long distances.

Haidar Hussein, who lives in Najaf and owns five shuttles, told Al-Monitor that he leases these vehicles during rush hour in return for a daily fee; they are used to drive around visitors between the outskirts of the holy city of Najaf and its city center, a distance of about 3 kilometers (1.8 miles).

Although the satouta originated as a product of the poor and unemployed, it has the potential to become an effective tool to create jobs, reduce the lack of transportation means and provide resources for the state budget, provided it becomes a licensed vehicle that is manufactured in public and private factories and abides by the traffic laws.