National campaign to support domestic goods on rise in Iraq 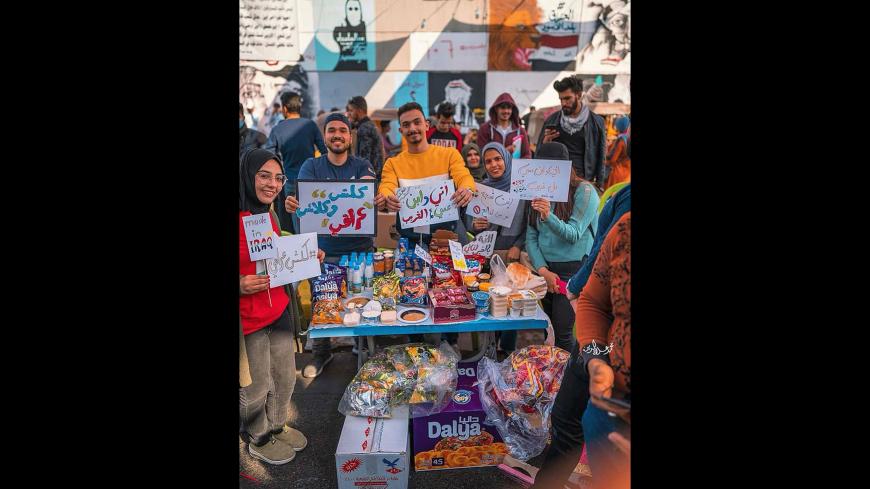 Despite the fact that the number of protesters has been decreasing recently, especially after the assassination of two top commanders — Iranian Quds Force commander Qasem Soleimani and Abu Mahdi al-Muhandis, Tehran-backed deputy leader of Iraq's Popular Mobilization Units — these campaigns are continuing, and in some cities like the capital Baghdad even on rise.

Protesters went out into the streets and launched a campaign on social media, which went viral among Iraqi activists and internet users.

Made in Iraq has been sharing pictures of Iraqi products and asking Iraqis to buy them. Activists in the Iraqi National Product campaign also called on its Facebook followers to buy chicken from the city of Kubaysah, which is produced in Anbar governorate. They also encouraged the purchase of red eggs produced in al-Nuaimiya in Wasit governorate. Activist Abbas Faisal al-Mamouri wrote on social media pages supporting local products that “these campaigns are positively reflected on increasing the gross domestic product and decreasing the unemployment rate.”

The campaigns have had good results so far. For instance, Diyala province in eastern Iraq announced Jan. 1 that the sale of chicken and egg products has significantly increased recently as a result of the campaigns.

Mamouri also told Al-Monitor, “Impressive results have been achieved by the campaigns. Local products began to invade markets, due to the higher demand on them.” He called on “the owners of factories and plants as well as Iraqi investors to work on improving the quality of the products to gain the confidence of Iraqi consumers.”

The campaigns seem to have prompted, on Nov. 28, the Supreme Judicial Council to tighten measures on smuggling and importing foreign goods by illegal means, to further strengthen support for domestic products.

During one of the protests, activist Omar al-Mashhadani told Al-Monitor, “I have been in contact with the owner of a dairy factory in Babil governorate that has been closed since 2007. He told me that the factory will be functioning again with one production line and will be in full power within a few days. This would provide 70 jobs.”

Mazhar Muhammad Salih, financial adviser to the Iraqi prime minister, told Al-Monitor, “Reaping the fruits of the campaigns requires the activation of two basic laws that need an organizational structure and to have an effective executive force, i.e., the Product Protection and Consumer Protection Councils.”

He noted, “This requires first the protection of the quality of goods, especially those that are imported, given that these goods are extremely harmful to consumers’ health and income. Second, domestic products need to be protected from imported products.”

Salih added, “Protecting the national product needs a national decision that takes three major factors into account: enforcing the law to protect the product, controlling the borders using military force to protect the country’s economic fence from smugglers and lawbreakers, and using an alternative customs tax system, in cooperation with international expert companies.”

Mohammad Hussein al-Mousawi, director of a commercial company in the Shorja market in Baghdad, said in a Nov. 24 statement, “Shoddy goods have flooded the markets.”

In an interview with Al-Monitor, former parliament member Sarwa Abdul Wahid attributed the delay in national production to the fact that “successive governments failed after 2003 to lay down a strategic plan to revive factories due to their preoccupation in conflicts.”

“The youth campaigns in support of local products were positively reflected in the marketing and promotion of national goods. The campaign to boycott Iranian products is being politicized within the agenda of extracting Iran’s political influence in Iraq, which had a decisive impact in the formation of the government of Prime Minister Adel Abdul Mahdi. The government has failed big time and caused the street to turn on Iran,” she said.

Abdul Wahid added, “The volume of unilateral trade exchange in favor of Iran reached in the previous governments’ periods $16 billion annually. Under Abdul Mahdi, this figure doubled, according to some official information.”

Spokesman for the Ministry of Planning Abdul-Zahra al-Hindawi told Al-Monitor, “The campaign was launched at an appropriate time, as Iraq needs to rebuild the thousands of factories that are not operating. This is part of the five-year plan from 2018 to 2022 that requires 18,000 factories to be operational.”

He said, “The campaign coincides with Iraqi sufficiency of cement at a capacity of 31 million tons. Iraq has also stopped the import of 22 types of crops. The Iraqi plastic industries meet the need and their import has also been stopped. The import of milk decreased with about 50%.”

Zaid al-Hilly, a journalist and editor-in-chief of Dunia al-Mal wal-Istesmar magazine (Arabic for Money and Investment World), told Al-Monitor, “Encouraging the national product is more than a campaign, but rather a popular awakening and uprising. The volume of the imports of simple goods and materials with Iraqi alternatives stands at about $36 billion annually.”

Economic researcher and former engineer at the Ministry of Oil Muhammad Zaki Ibrahim spoke to Al-Monitor about the effect of the politicized agenda on the campaign to support local products. “The campaign targeted mainly Iranian products and omitted the products of other countries," he said.

He pointed out that the wave of protests is united in showing hostility to Iran, adding, “The boycott falls within the scope of the US-Iranian conflict in the region.”

Ibrahim pointed to adverse reactions to this campaign that portends a similar boycott of goods from the Gulf states and Turkey by the social groups that sympathize with Iran. He noted, however, “The campaign to encourage national goods is widely admired.”

The protesters in the streets clearly focus on encouraging the national product following the launch of Made in Iraq. The exhibition called “Liberation Youth to Support the Iraqi Industry” at Tahrir Square in Baghdad in late November is the best example.

A remarkable presence of the Iraqi industry is expected at the next exhibitions and support will not be limited to advertising and campaigns. Rather practical laws and mechanisms allowing the supply of pieces of machinery and capital for entrepreneurs are to see the light.