The bread crisis in Syrian regime areas is expected to become worse in the next few months due to drought and its subsequent impact on wheat crop production. 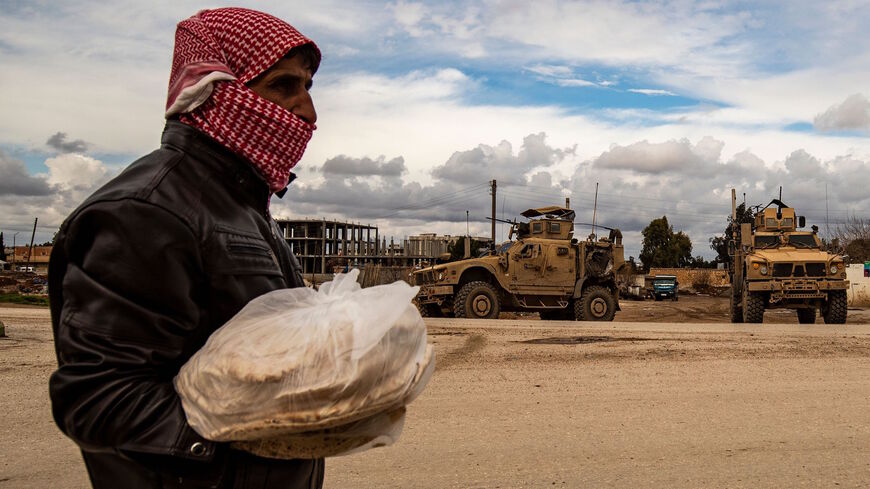 A man carrying bags of bread walks as a patrol of US military vehicles is seen in the town of Tal Tamr in the northeastern Syrian province of Hasakah province along the border with Turkey on Feb. 8, 2020. - DELIL SOULEIMAN/AFP via Getty Images

ALEPPO, Syria — Recent remarks by Syrian Agriculture Minister Mohammad Hassan Qatana on a decline in wheat production have raised fears that a full-fledged bread crisis is on its way in Syria.

Qatana told the Syrian government-affiliated Al-Watan news site May 17, “Wheat yields are not enough to meet all needs [of the population].” This means Syrians will likely be waiting in long lines outside bakeries.

On May 21, Qatana told Radio Sham FM, which is close to the government, “This year, the drought was severe for several reasons, including the decrease of precipitation rates by 50% to 70%, depending on the provinces." He said precipitation in Hasakah fell by more than 50% and that temperatures rose, increasing the rate of evaporation.

He added, “Syria has not seen such a drought in years. In previous years, drought was witnessed in one or two provinces only, while this year, all provinces have been affected, which severely impacted agriculture. Winter crops, namely wheat and barley, whose production is strategic, were very much affected, especially in rain-fed areas.”

“Barley production, which was expected to exceed 2.2 million tons [this year], decreased to 450,000 tons. Wheat was cultivated on nearly 1.5 million hectares, half of which were rain-fed. The irrigated part is in good condition as water resources and fuel were made available, while 80% of the rain-fed cultivated areas were not planted,” Qatana continued, adding, “We met with the Ministry of Water Resources [to discuss] the decrease of groundwater resources and levels of the dams’ reservoirs, and we decided to reduce the cultivated area in next year's plan in line with the available water resources.”

In his May 17 statement to al-Watan, Qatana said his ministry will rely on the reserve quantities of imported wheat, in addition to the current production, in order to meet annual needs. “While [wheat] production in rain-fed areas was expected to hit 1.2 million tons this year, production may not exceed 300,000 tons.”

On May 9, Qatana told Radio Sham FM that the Agriculture Ministry would receive wheat and barley from farmers beginning May 20, at 900 Syrian pounds (around 29 US cents on June 1, according to Syrian Pound Today) per kilo of wheat, while the official price of barley that will be purchased from farmers had not been determined.

On May 12, the official Syrian state news agency, SANA, quoted the general director of the Syrian Grain Establishment, Youssef Qassem, as saying 450 billion Syrian pounds have been allocated to pay for the wheat crop for 2021.

Qatana's statements about the decline in wheat production were confirmed by the head of the marketing office at the General Union of Peasants, Khattar Imad. He told Al-Watan newspaper May 18, “The wheat quantities that will be marketed this season will be lower than last year’s due to the drought.”

The UN Food and Agriculture Organization issued a report May 4 that said irregular rains and unusual temperatures were having a significant impact on the main cereal production areas in Syria.

Karam Shaar, an economist and researcher at the Middle East Institute in Washington, told Al-Monitor, “Nearly 11 million people live in the Syrian regime areas, and they need about 2.8 million tons of wheat, nearly two-thirds of which goes to bread production." He said that because of the low yield of Syrian wheat this year, he doubted the government would buy more than 300,000 tons from Syrian farmers, compared with 700,000 tons last year.

“I expect the government to import at least 1.5 million tons, and the private sector to import the remaining quantities. Assuming that one ton of wheat is about $340, the cost of import may exceed $500 million,” he added.

Shaar said the Syrian regime had set a higher price to buy wheat from farmers in recent years in order to motivate farmers in the areas under the control of the Kurdish-led autonomous administration of north and east Syria to sell to Damascus. "Most of Syria's wheat production used to come from the northeastern areas [under the control of the autonomous administration], but this year’s drought has seemingly reduced wheat production compared with that of the past year,” he said.

The Syrian government usually secures its wheat needs by buying wheat from local farmers and through imports. The government either signs contracts with Russia to import wheat, or receives wheat in the form of aid from other countries. The government also presents bidding tenders to buy wheat through the Syrian Grain Establishment.

Shaar added, “If the economic situation in Damascus persists, people will line up outside bakeries in the coming months.” Commenting on the impact of the Western sanctions imposed on the Syrian government, he said, “The impact of the sanctions on the Syrian regime's import abilities is insignificant; the problem is that [the regime] does not have the necessary sums [to import].”