Nine years into the Syrian war, much has changed for the Kurds, but conditions seem riper today than ever for them to obtain their rights. 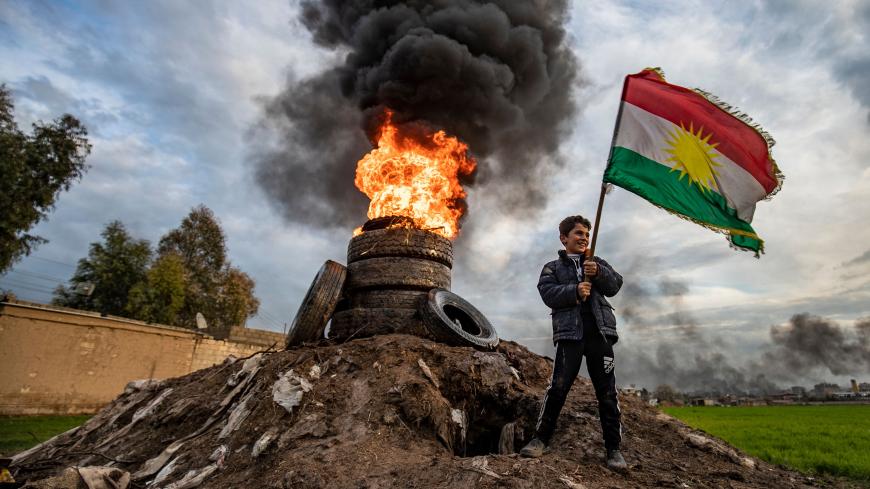 Syrian Kurds are surrounded on all sides by conflicting forces, but their internal division has also held them back. Could they finally be ready to unite their efforts to build a workable autonomy?

Kurds have long borne the weight of the Syrian civil war, which this month entered its ninth year. Kurdish cities are home to several militias and military factions, in addition to the Syrian regime and opposition factions backed by Turkey. The Russian army is also deployed in specific Kurdish areas, while the US military has set up its own bases. The US-backed Syrian Democratic Forces (SDF), a Kurdish-Arab alliance, partnered with the international coalition in the fight against terrorism.

Meanwhile, in light of mounting Turkish pressure to establish a safe zone, the United States implemented a partial withdrawal in October. A few days later, Turkey launched its Operation Peace Spring from Ras al-Ain to Tell Abyad in northern Syria. But in November, US forces redeployed to protect oil wells in the region extending from Rumailan and al-Malikiyah to Deir ez-Zor.

Following the offensives of Syrian opposition military factions and Turkish military operations such as Operation Olive Branch in 2018 and last year's Peace Spring, Kurds ended up losing swaths of land. Hundreds of thousands of citizens were displaced from Kurdish areas. Millions of Syrian Kurds fled to other Kurdish regions, Turkey and Europe. Thousands of them lost their lives in battle, especially against the Islamic State.

Meanwhile, the Kurdish National Council (KNC) in Syria obtained independent status as a member of the Syrian opposition’s main negotiating body and gained representation on the Syrian Constitutional Committee in Geneva.

On Jan. 10, the KNC and the National Coalition for Syrian Revolutionary and Opposition Forces (SNC) reached an agreement on the return of those displaced from Syria's Kurdish areas.

Al-Monitor talked to Faisal Yusuf, coordinator of the KNC-affiliated Kurdish Reform Movement. He said, “We agreed with the SNC to return the displaced and guarantee their security and safety in Afrin, Tell Abyad and Ras al-Ain, and to make sure they get back their properties.”

In a separate development, the rift widened between the KNC and the Democratic Union Party (PYD) over administration of the Kurdish area. The KNC views nationalism as a solution to the Kurdish issue in Syria, while the PYD advocates decentralized cantons.

In May, France launched an initiative for a Kurdish-Kurdish rapprochement, but it failed. The United Kingdom also tried to bridge the points of view in August, but was unable to mend the rupture.

Nashat Zaza, a member of the political bureau of the Kurdistan Democratic Party-Syria, believes the Kurds, like all components of the Syrian political scene, are divided between supporters and opponents of Syrian President Bashar al-Assad.

“The rift between the Kurds has undermined their political standing. It killed the chances of the federation project," Zaza told Al-Monitor. He argued that the Syrian opposition’s lack of a political project encompassing all Syrian components has strengthened the government again after it came close to falling.

Zaza said, “The SDF lost several Kurdish areas and did not receive any military support from its allies. In exchange for support, the regime required the SDF to surrender to it. Meanwhile, Turkey and the military factions it backed practiced ethnic cleansing and committed atrocities against the Kurds in those areas.”

Zaza continued, “In light of field changes in the Kurdish areas and other Syrian areas, the Kurds should reposition themselves on the field and politically. The KNC’s membership in the negotiating body and the [Constitutional Committee] has weakened the SDF’s position politically and popularly. We now have a good opportunity for rapprochement to save the rest of the Kurdish areas and defend the rights of the Kurdish people. Mazlum Kobane, the SDF chief, should strive for international endeavors for a true partnership between the Kurds."

In the meantime, the Autonomous Administration of North and East Syria, often referred to as Rojava, continued its efforts to obtain political gains from the Syrian government, to no avail.

Ilham Ahmed, co-chair of the Syrian Democratic Council (SDC), explained in January 2019 to local media outlets the failure of the discussions that month between the SDC and Syrian government. Damascus refuses to recognize the autonomous administration and only approves of decentralization under Legislative Decree 107. The government has threatened to take military action against the Kurds.

However, the scope of disagreement between the autonomous administration and Damascus has continued to widen. The SDF's Kobane has repeatedly rejected a military solution in Syria and stressed the impossibility of reaching any solution to the Syrian war without resolving the Kurdish issue.

“Kurds are protecting their areas from the terrorist Islamic State. They established a self-administration with the participation of all components in northern and eastern Syria, including Arabs, Kurds, Assyrians and Armenians. The SDF, which represents all the components of the Kurdish area, liberated 30% of the Syrian territories from the terrorist forces. The Kurds formed a democratic model and achieved civil peace and stability in their area, with full equality among men and women in all institutions and complete freedom to practice beliefs and languages," she told Al-Monitor.

Commenting on the current field situation, she said, “Turkey supports IS and radical forces while it fights Kurds. Turkey is a non-democratic country that attacked our areas and occupied Afrin, Ras al-Ain and Tell Abyad. Its goal is to strike at stability in Syria and prevent any democratic development in the region.”

Yusuf continued, “The Kurds tip the balance of power for any side with whom they ally. We demand a decentralized state that guarantees the rights of all components. We want the constitution to give the Kurds their due rights. Syria is plagued by a structural crisis and won’t be able to fix its problems with simple reform measures. The existing political regime requires a radical change. The objective and subjective circumstances are riper today than ever for such change. I am optimistic that serious steps will be taken in the near future.”

Baz Bakkari, a Syrian Kurdish journalist based in Paris, believes most of the countries with interests in Syria want to sieze the Kurdish card to exploit it in the future. He told Al-Monitor by phone, “Russia is pushing to reconcile Kurds and get them to agree with the Syrian regime. … The US’ steps, however, seem slower than those of its Russian rival, but it also seeks to form a bloc representing the components of Syria's Jazeera canton, spearheaded by Kurds. This would ensure the US a foothold and a legal presence in Syria. Meanwhile, Turkey is trying to win over the KNC to rebut allegations that it is anti-Kurds and to support its theory that it is only hostile to the PYD.”