Syria’s Kurdish parties do not see eye to eye

While Syria's Kurds call for a unified political project to manage Kurdish territories, they remain confused about the differences between the Kurdish National Council and the Syrian Democratic Forces. 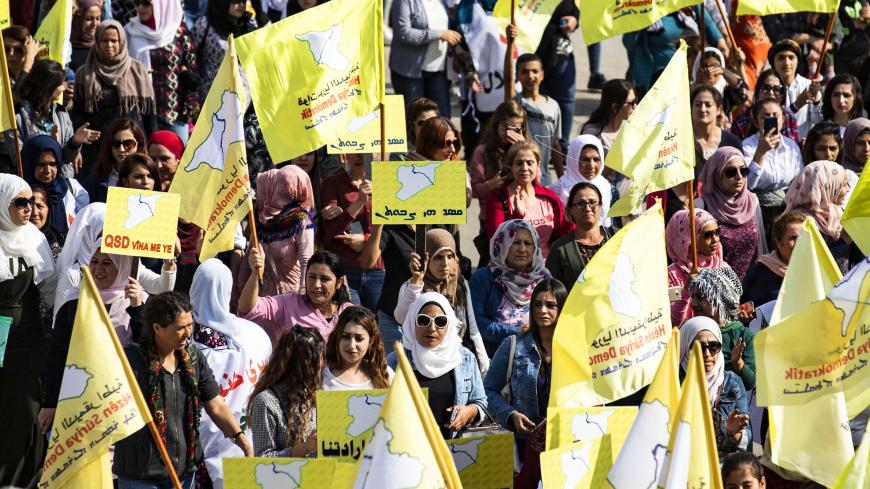 Russia has repeatedly encouraged the Syrian government and the Syrian Democratic Forces, or SDF, to open channels of dialogue and to include the SDF in the ranks of the regime's forces.

He also denied the need for a military agreement with any Syrian Kurdish party. The Kurdish National Council has requested that the military forces of Rojava come to an agreement on the protection of the area. Kobane also said that the SDF has been fighting for eight years, had many fallen martyrs and that it represents all Kurdish parties.

Kobane said that the SDF did not mind the return of any Kurdish force to fight under the banner of the SDF, a jab at the Rojava peshmerga.

Hakam Khalou, a member of the dignitaries’ council of northern and eastern Syria and former chairman of the Legislative Council in Jazira province, believes that the Kurdish National Council bears responsibility for the failed attempts to unite the Kurds.

“Every time the Kurdish parties have tried to meet and agree on a unified vision, including the calls by Kobane, the council takes a negative stance and comes up with excuses," he told Al-Monitor. "The council is at the mercy of Turkey, which controls it.”

Khalou believes the Syrian regime is the official and legitimate authority in Syria.

“The Syrian regime has legitimacy and is a key player in the crisis and it is imperative to hold dialogue with it," he said. "The Syrian opposition, on the other hand, failed to give assurances to a large part of the Syrian people, especially the non-Arab components. It also failed to present an inclusive national project, which was rather overshadowed by sectarian rhetoric, radical Islam and national racism.”

Khalou believes that the common objective of previous agreements between Kurds and Syrians was "the constitutional recognition of the rights of Kurds and other components in Syria under federal decentralization."

The problem, he said, is in the “alliances and the fact that the national council is part of the National Coalition for Syrian Revolutionary and Opposition Forces, sponsored by Turkey, which opposes any gain for the Kurds. The council is subject to the Turkish will.”

The fundamental solution to the Syrian crisis, according to Khalou, is “to change the constitution according to historical facts and facts on the ground, ensuring Syria’s decentralization, federalism and a secular pluralistic state.”

Some Kurdish journalists and writers, however, have a different view. Baz Bakkari, a Syrian Kurdish journalist based in Paris, told Al-Monitor, “There is something missing in all this. We have yet to be presented with a clear action plan to bridge the gap between the different Kurdish political parties, mainly the Kurdish National Council and the Movement for a Democratic Society. What has been done so far was merely launching an initiative, which the different political parties viewed as positive and that was it.”

Bakkari believes that the nature of the dispute between the Kurdish National Council and the Democratic Union Party​ (PYD) is due to political differences dating back to the beginning of the Syrian crisis and that solutions need to be carefully planned.

“We cannot make amends in media consumption speeches from all sides, especially the SDF. There must be a clear action plan paving the way for a fruitful dialogue, otherwise we would be running in a vicious circle that will lead us nowhere,” Bakkari said.

Bakkari does not encourage a separation between the PYD and the SDF. “The relationship between the two is clear and closer than with any other party. They have been coordinating on several levels without getting back to other Kurdish parties,” Bakkari said.

“The SDF is negotiating with the Syrian state, Russia; and the Syrian Democratic Council is moving in Washington. Any deal without referring to the rest of the Kurdish parties in Syria will be incomplete, in my opinion. If the SDF has a real intention to unify the Kurdish discourse, it has to set a clear road map and address all points of disagreement, whether political or administrative,” Bakkari added.

“In fact, the self-administration, the PYD and the SDF, with its all different names, are one and the same system," he said. "After the fall of Afrin, Sari Kani [Ras al-Ain] and Tell Abyad, these groups are trying, by all means, to cover up their political, administrative and military failure, including opening channels of communications with the Syrian regime and some of the international stakeholders involved in the Syrian situation. But with this mindset of taking action individually, the SDF will lose the rest of the areas, too. In order to gain popularity among Kurds, the SDF is also trying to communicate and make an agreement with the Kurdish council to cover up its failure.”

“The SDF cannot communicate with the regime alone," Ismail said. "The Kurds need to align their position with that of the Kurdish council. They need to have a clear stance before entering into negotiations with the regime or any other party.”

Ismail also commented on the self-administration’s demand for federalism in its dialogues with the regime: “The self-administration has been playing with terms alternating between federalism, a brotherhood of people, the democratic nation. It is ready to give up all these slogans and federalism to preserve its survival. It is incapable of formulating a decent national position on the Kurdish issue or explaining the suffering and injustice the Kurds have been subjected to because the self-administration is relying on regional regimes and on playing on international contradictions.”

He continued, “We are calling for building confidence between the two sides because of the PYD’s positions on the previous agreements, the French initiative, among others. The PYD has also to release the detainees, uncover the fate of the missing people, open a party office and allow political and media activities. These would be a prelude to a dialogue with an influential international guarantor. The Kurdish dialogue is tactical and not decisive or fundamental. Therefore, any agreement should be comprehensive at the political, military and administrative levels.”

He believes that the “PYD is evading all these steps because it does not believe in a political partnership or joint action but in the implementation of agendas of the parties it agrees, with disregard to the Kurdish national issues. The PYD had previously dealt with the regime, Russia, the US, Turkey and Iran. Today it continues hopping from one stakeholder to another, seeking to open channels of dialogue with all parties in a bid to implement its own agendas. The PYD does not wish to build a strategic agreement based on the rights of the Kurdish people.”

Kurds continue to wait for an agreement and a unified stance among all the Kurdish components that would serve as a guarantee for the Kurds’ future in Syria.