Are Kurds underrepresented in the new Syrian constitutional committee?

The Syrian national committee was announced by UN Secretary-General Antonio Guterres, and Kurds are not satisfied. 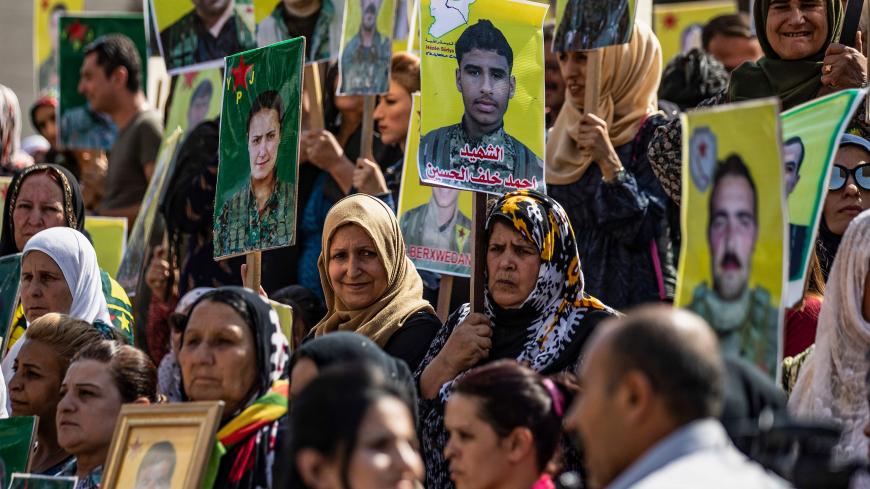 Syrian Kurds demonstrate in front of the United Nations offices in the Kurdish-majority city of Qamishli, Syria, Oct. 2, 2019. - DELIL SOULEIMAN/AFP via Getty Images

As the recently formed Syrian constitution committee gears up to hold its first meeting by the end of this month, Kurdish Syrians of varying groups have expressed concern that their interests could be sidelined in the forthcoming talks.

UN Secretary-General Antonio Guterres announced Sept. 30 the creation of a Syrian constitutional committee that will include members of the Syrian government, the opposition and civil society representatives.

Guterres said he was pleased to announce that an agreement was reached between the parties and with “the composition of the committee,” which is expected to begin its work in the coming weeks.

The 150-member committee was proposed during a peace conference hosted by Russia in January 2018 and will be tasked with drafting the Syrian Constitution.

Guterres promised to reveal the final list of 150 members, which is equally divided between representatives of the government, the opposition and civil society.

A statement issued by the office of UN Envoy for Syria Geir Pederson said the main procedural rules of the committee had been agreed upon between the Syrian regime and the opposition’s Syrian Negotiations Commission (SNC, also known as the Syrian High Negotiations Committee), with Pederson as a facilitator to the agreement.

The committee will convene under UN Resolution 2254 and serve as the first Syrian-Syrian agreement since the crisis began in 2011. It will operate under the so-called Twelve Living Intra-Syrian Essential Principles — 12 points of commonality between the various parties to the talks regarding the end-state of Syria that were identified by Pederson’s predecessor Staffan de Mistura in December 2017.

Kurdish participation within the committee includes Kamran Hajo, head of the Kurdish National Council (KNC). Hakim Bashar will represent the Kurds within the opposition. Civil society Kurdish representatives are Dorsin Iskan, Jafia Ali and Mohammad Rashid. Shirine Youssef will be on the Syrian government’s list.

Hajo spoke to Al-Monitor via phone and expressed his dissatisfaction with the Kurdish representation in the committee.

“The [KNC] is represented alongside the rest of the political formations as an independent entity in the [SNC]. The rest of the major formations have significant representation according to consensus among them, most of which do not weigh as much as the Kurdish Council on the ground.

Hajo said any decision should be approved by 75% of the votes within the 150-member committee.

“The Syrian community is ostensibly diverse at the political, intellectual and sectarian levels. This means that the committee encompasses similar approaches and will seek to secure votes to block any item against the rights of Kurds in Syria. Securing 113 votes to pass a resolution in favor of the Kurds may be difficult, but it could be easier to galvanize 37 votes to veto any decision against Kurds,” he added.

Hajo believes it would be difficult to commit to any decision since the regime would have the upper hand in passing decisions given the fact that opposition groups continue to have differences on several issues.

“There are 50 coherent voices [that] cannot be breached by any of the regime’s members within the committee. The regime is … not serious in drafting a new constitution that might generate a new political system,” Hajo said.

He argues that the issue is not solved merely by drafting the constitution but by implementing it. “If the army and the security remain unchanged, it would be impossible to carry out any item. It would be useless to draft a constitution and bypass the transitional government,” Hajo said.

Regarding the demands of the KNC within the constitution, Hajo explains that Kurds in Syria have never been recognized in the country since the inception of the Syrian state.

“We insist [on enshrining] the constitutional right of the Kurdish people who live on its historic land in Syria, or else the council will take the right stance at the right time. From the very beginning, we call for a federal Syria, a pluralistic parliamentary democracy [that] would adhere to international covenants and human rights principles and adopt the rule of law, since the fate of Syrians is not in their hands but in those of the international community,” he said.

“We will not accept the reproduction of dictatorships and chauvinist mindsets again, which is the greatest danger to the future of Syria and all of its components, and [we will not accept] the betrayal of the lives of hundreds of thousands of victims and martyrs who wanted freedom, dignity, democracy and change for Syria,” Hajo added.

Nasr Hariri, head of the negotiating committee of the Syrian opposition, said in a press conference in Istanbul Sept. 30 that the demands of the Kurds are on the table save the establishment of a federal state, which raised fears among Kurds about their future in Syria. Hariri believes a federal system would allow all components to be part of the decision-making and to manage their areas, and it would prevent the return of exclusionary policies against the different ethnicities, including Kurds.

Al-Monitor met with young Kurdish activist Gaker Selo, who expressed his fears. “We continue to suffer from having our identity and ethnicity undermined. The only solution would be in the establishment of a federal state instead of a central one, which would be the only guarantee for strong ties between the government and the center to prevent fragmentation, crises and ongoing wars,” Selo said.

“The hopes pinned on the success of the constitutional committee are not high. The decision-making should be done through agreement and consensus, not pluralism and voting, should the committee want to succeed in its quest. Failure means further escalation and a flare-up in the war,” he added.

Al-Monitor also met with Jawan Ali, an official of the Kurdistan Democratic Union of Students and Youth, who said, “We, as Kurds, are very few compared to the Arab and Islamic components dominating the committee. It is certain that this representation is not in the interest of the Kurdish people, given the mechanism of decision-making.”

Representatives of the Democratic Union and the Kurdish self-administration are absent in the committee for reasons likely related to the rejection of the regime and the opposition and a Turkish veto on their participation.

"Terrorism continues to pose the greatest threat to overcoming the crisis in Syria," Abdel Karim Omar, head of the external relations office in the self-administration, told Al-Monitor.

“The solution lies in building a democratic and decentralized Syria and eliminating the ideology of the Islamic State, which requires further coordination with us, as Kurds, as a military force on the ground,” Omar added.

Omar believes that any constitutional committee excluding the self-administration representatives would not be feasible for two reasons. “First, the work of such a committee would be in direct conflict with UN Resolution 2254 on Syria. Second, the committee was formed from the results of the Astana talks. It does not represent all the Syrian components. Syrians control 30% of Syria, which means about 5 million people. It would be unfair to exclude us. There is no solution in the region without the Kurds,” he argued.

Omar explained that Turks are being sidelined because of the Turkish veto on their representation and the common interests of Turkey, Iran and Damascus to disregard Kurds, regardless of their other differences. “This is not to mention that Russia’s priority is to satisfy Turkey with commercial and military deals to deepen the rift between Ankara and Washington,” he added.

Omar explained that it was agreed on the participation of the Kurds from the KNC in the committee, but the Kurds of the Syrian Democratic Forces and of the self-administration were excluded.

“We are the real opposition on the ground. From the beginning, we have been part of the Syrian society and the democratic national opposition. We are not part of the regime or the opposition, nor part of the sectarian conflict in the country. This committee would be futile in light of this structure and with the exclusion of Kurds; without them, there will be no permanent solution,” Omar concluded.

Pederson said Sept. 30 he would invite members of the committee to hold the first meeting in Geneva on Oct. 30, and the committee would set a timetable for drafting a new constitution for the country. The United Nations Security Council expressed concern Oct. 16 for the situation in the northeast, where Turkey has launched an offensive against Kurdish-held areas and called for an immediate cease-fire.