Five years into the Syrian war, Syrian Kurds declare a federal region in the north of the country, which was quickly rejected by Assad’s regime and the Syrian opposition. 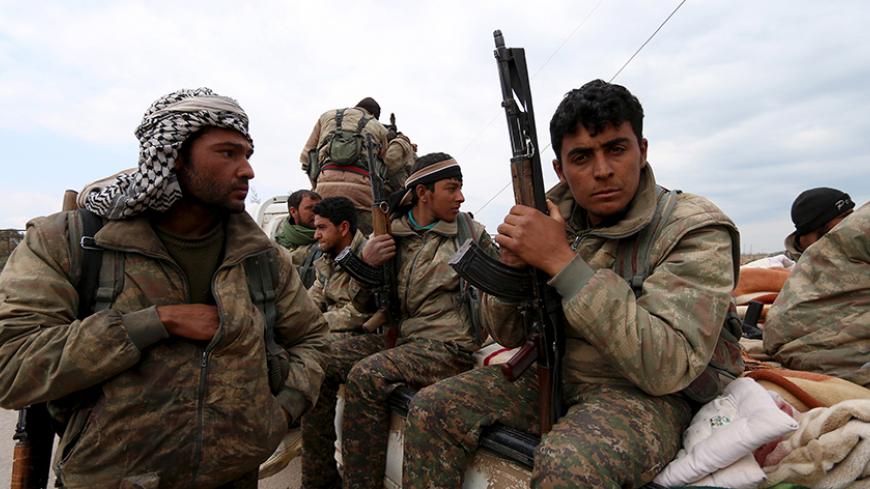 Kurdish People's Protection Units fighters carry their weapons while riding on the back of a pickup truck in Qamishli, Syria, March 11, 2016. - REUTERS/Rodi Said

QAMISHLI, Syria — Syrian Kurds' declaration of a federal region is stirring controversy as the country enters its sixth year of war.

Syrian Kurds agree on their right to declare a federal region, yet some of them believe this could lead to the exploitation of their national cause. In light of most Syrians’ rejection of the just-announced federal solution, a new crisis is about to hit Syria, which is already plagued by other crises.

On March 17, the Kurdish Democratic Union Party (PYD) declared the Federal Democratic System of Rojava and Northern Syria, making the announcement at a conference in Rmeilan that included 150 delegates and representatives from 31 Kurdish, Assyrian and Syriac political parties, independent figures and Arab tribes. The federal zone includes Rojava's three cantons — Jazira, Kobani and Afrin — as well as Tell Abyad and other areas Kurdish forces have recaptured.

The Conference of the Constituent Assembly of Rojava met to approve a document establishing the federal unionist system, stating that the solution to the Syrian crisis is the federal model.

The document indicated, “The federal system of Rojava — which is the Kurdish name of West Kurdistan — aims to create a democratic unionist state rather than a state with a centralized regime.” The document also stressed that “the federal system must be applied in accordance with the new social and political administrative organization, within the framework of Syrian unity.”

However, the Kurdish document was soon treated like all other complex Syrian documents: The Syrian regime as well as the political and military opposition rejected the declaration of a federal region, in light of the absence of a legal and legitimate cover or an international recognition.

The Syrian Foreign Ministry warned in an official statement issued March 17 that “raising the issue of a union or federation would prejudice the unity of the Syrian land, which violates the [Syrian] constitution, national concepts and international resolutions.”

Syrian President Bashar al-Assad said in a March 30 interview with Russia's Sputnik news, “Syria is a very small [country] to be able to handle a federal [system].” He added that the issue is linked to the constitution, which should be approved by the people.

Assad further explained, “Most Kurds want to live under the umbrella of a united Syria and under a central system," not a federal one.

The National Coalition for Syrian Revolution and Opposition Forces agrees with the regime and rejects the Kurdish move. An official statement published March 17 on the coalition’s website stated, “The shape of the Syrian state, whether central or federal, cannot be determined unilaterally by a single faction, one segment of the people, a party or a movement.”

The statement indicated that the issue will be decided when negotiations lead to a national conference tasked with drafting a new constitution, which will be subject to a referendum.

Coalition President Anas al-Abdah said in a March 18 press statement from Istanbul that federalism is completely unacceptable: “No party or component may take such a decision; this decision is an exclusive right that reverts to the Syrian people as a whole."

Sihanouk Dibo, the PYD's presidential adviser, challenged the idea that federalism is the beginning of the country’s division.

Dibo told Al-Monitor he was surprised to hear a federal republic described as division. “Syria is witnessing today a sharp state of division, and a federal system would ensure its unity and integrity and would prevent its fragmentation," he said.

One of the key strengths of a federal system is that it would bring together seven components of the Syrian people — Kurds, Arabs, Syriacs/Assyrians, Chechens, Circassians, Turkmen and Armenians —all of which represent three monotheistic religions: Islam, Christianity and Yazidism.

He indicated that the military and political representatives of these communities were present at the Rmeilan conference and expressed the need to find a governance model to solve the Syrian crisis and resolve all of its complexities, in particular the Kurdish issue.

According to Dibo, the regime and the opposition’s rejection of the federal project is only normal. “This was no surprise for us. We were expecting it, especially since the two sides have yet to provide any scenario for a solution of the Syrian crisis," he said.

“The federal system is [needed] for administering the areas recaptured from the Islamic State (IS). This is a solution that may be generalized all over Syria.”

In response to a question on whether the federalism project is temporary, Dibo said, “The federal system was declared today by all of the components, and this means that it will not be denounced in the future to give way to other forms of governance that do not lead to any solution. We will fortify this system to overcome any attempt to reproduce the authoritarian regime.”

It should be noted that many Kurdish parties did not attend the Rmeilan conference, such as those affiliated with the Kurdish National Council (KNC), one of the blocs of the National Coalition for Syrian Revolutionary and Opposition Forces, and the Kurdish Democratic Progressive Party.

The KNC, one of the Syrian opposition blocs, denounced the PYD's declaration, saying it amounts to a unilateral decision. In a March 20 statement, KNC questioned the move and asserted the declaration would "undermine the Syrian Kurds’ struggle and their national and patriotic aspirations.”

In an interview with Al-Monitor, Shellal Gedo, secretary of the Kurdish Left Party in Syria and a member of the General Secretariat of the National Coalition for Syrian Revolutionary and Opposition Forces, said, “The federal region was declared unilaterally. We do not support this declaration.”

He added, “Deciding the fate of the Kurds should be subject to a Kurdish-Kurdish agreement and to a Syrian national consensus.”

Gedo confirmed that “the KNC is publicly demanding federalism without being afraid of any potential blame or reproach since it believes the best and most efficient solution is to agree on a federal state in a country plagued by turbulent wars and witnessing sectarian, racial and ethnic conflicts for about five years now.”

The KNC and the National Coalition for Syrian Revolutionary and Opposition Forces want constitutional recognition of the national identity of the Kurdish people and say the new Syria must be a pluralistic democratic state governed by a decentralized administrative system that strengthens local jurisdictions.

“The KNC insists on the federal system since it is the solution that meets the needs of the Syrian society,” said Gedo.