Why Syria's Kurds are inclined to negotiate with Damascus

As the Syrian regime regains control of more areas from opposition forces, and given US claims of a desire to withdraw troops, Syria's Kurds seem to be inclined to engage in talks with Damascus. 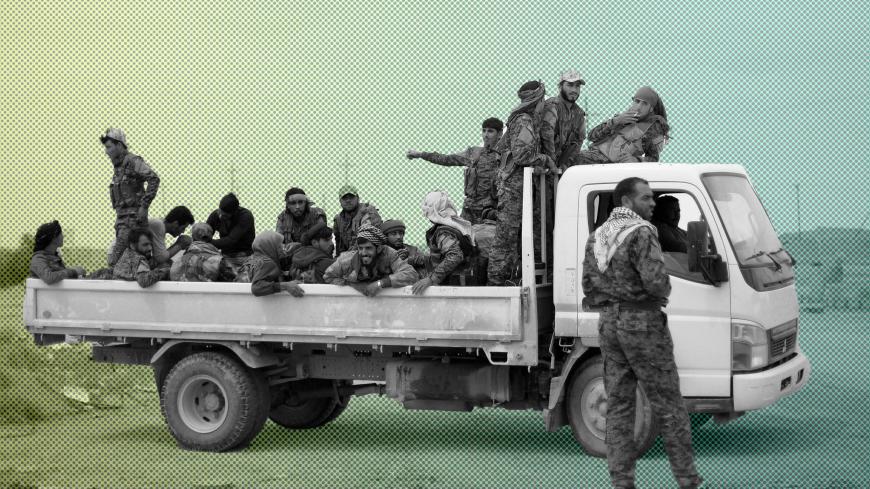 As the Syrian regime continues to make advances in the country's south and expand the area it controls, government forces have deployed soldiers along the border with Jordan near Daraa province and the Golan Heights in Quneitra. Meanwhile, signs indicate that there is rapprochement between Damascus and the opposition's political and military components in northern and eastern Syria (east of the Euphrates River), where the US-backed Syrian Democratic Forces (SDF) are in control.

At its third conference in Tabqa city in the northern province of Raqqa on July 16, the Syrian Democratic Council announced the establishment of a comprehensive platform labeled the “Democratic Autonomous Administrations.” The platform will represent the autonomous administrations of the SDF-controlled areas in potential future talks with the Syrian regime.

The Syrian Democratic Council is an alliance of political parties and blocs founded Dec. 8-9, 2015. It is the political wing of the US-backed SDF, which is still fighting the remaining groups affiliated with the Islamic State (IS) in eastern Syria on the border with Deir ez-Zor.

There are signs that practical measures to open communication channels between some autonomous administrations and the Syrian regime are being taken. On July 13, a co-chair of the Syrian Democratic Council, Ilham Ahmed, told the local Hawar news agency that there are talks between the local council of SDF-controlled Tabqa and the regime to improve services and to restore the regime’s powers over the Tabqa dam.

Since the outbreak of the protests in Syria in early 2011, Kurds, represented by the Kurdish People's Protection Units, and other Arab and ethnic components in northern and eastern Syria strengthened their presence by forming the military force known as the SDF.

Serving as the US ally against IS, the SDF was able to expel the group from areas and take over about 35,000 square kilometers (13,500 square miles) of Syria's total surface area of 185,000 square kilometers. The SDF-controlled areas do not fall under the authority of Syrian President Bashar al-Assad. The latter threatened May 31 to restore them, saying, “The SDF is the only persisting problem in Syria.”

The SDF’s concern that the areas it controls may be the next target of the Russian-backed Syrian regime forces seems to be the main reason behind pushing for talks and finding common ground.

Sihanouk Dibo, a political adviser to the Democratic Union Party (PYD), a key component of the Syrian Democratic Council, told Al-Monitor over the phone, “This could be true, particularly since neither the US nor Russia will prevent such negotiations. Reaching a solution for the Syrian crisis is a UN demand.”

The Syrian Democratic Council is increasingly discussing negotiations and formed a platform consisting of the democratic autonomous administrations and civil councils from Raqqa, Deir ez-Zor and Manbij — which are entirely under its control — in addition to SDF representatives. Meanwhile, as military operations against IS are coming to an end, the stance of the US — a key supporter of the SDF — is getting more ambiguous by the day when it comes to a military presence in the area, as it declared its intention to withdraw its troops without setting a date.

The US stance could weaken the SDF position before groups that are hostile to them and the regime and which reject their presence in their areas, such as the Arab tribes, which are not part of the SDF. This being said, talks with the strongest party, namely the regime, seem to be the most logical option.

Nevertheless, Dibo indicated that “the reason behind the intention to negotiate with the Syrian regime is the Syrians’ desire, in both the north and east, to find a solution to this crisis (the Syrian war). In addition, the regime does not have the luxury of taking decisions on its own, since Russia is a main ally. On the other hand, there is an international and Arab coalition led by the US in the east of the Euphrates River — which means that the Syrian people in general barely have a say in the decision-making process.”

He said, “Engaging in negotiations with the regime does not mean that we have surrendered.” He stressed that no official communication has been initiated so far between the autonomous administrations and the authorities in Damascus.

The Democratic Autonomous Administrations project to prepare for negotiations with Damascus is a new and improved system that completely differs from the federal system, known as the Democratic Union of Rojava in northern Syria. The latter, declared on March 17, 2016, is yet to see the light.

Dibo believes that this “goes perfectly with the prevailing situation. The autonomous administrations and local and civil councils in the north and east of Syria are the most appropriate, particularly since the solution of the Syrian crisis requires a democratic system to succeed after the central government system failed.”

On Oct. 17, 2017, the Syrian regime and representatives of the Kurdish parties met for talks at the Russian-controlled Hmeimim base on the Syrian coast. “The regime was not serious,” said Dibo. Yet he stressed “the desire to hold UN-supervised negotiations as the best way to ensure a smooth process. We still believe the negotiations between the SDC [Syrian Democratic Council] and the regime to be a difficult and long process.”

Meanwhile, on the sidelines of the Syrian Democratic Council conference, former PYD co-chair Salih Muslim stressed July 16 “a willingness to negotiate with the Syrian government, provided that there is an international guarantor to implement the results of the agreement between the parties.”