According to the former head of the Kurdish Democratic Union Party, Salih Muslim, a recent Kurdish delegation to Damascus didn’t go into the talks with red lines, but rather focused on building confidence. 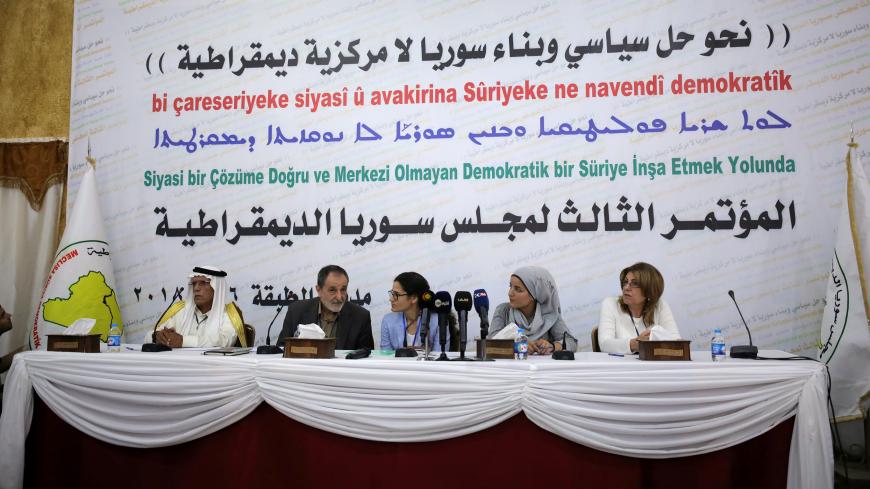 After the Kurdish-led Syrian Democratic Council, the political wing of the US-backed Syrian Democratic Forces (SDF), sent a delegation to Damascus, cards are being reshuffled. Following the first meeting in Damascus after President Bashar al-Assad’s declaration of a dual strategy of “either negotiations or war” for the future of territory controlled by the SDF, an option of reconciliation has actually emerged. It was reported that the government delegation presented a 12-item list of demands that included handing over districts that have government offices in Raqqa, Deir ez-Zor and Hasakah, joint management of oil and natural gas fields by local administrations under the supervision of the government, flying the Syrian flag at border crossings and government buildings, and the gradual termination of contacts with foreign forces.

The Kurdish delegation, however, did not offer much information, simply saying that committees will be set up to prepare for a transition to the phase of negotiations.

This Kurdish-regime dialogue, which was held July 26-27, offered optimism that war may not be the only option, yet there are many obstacles left to overcome. For one thing, the 50,000-strong SDF and the proposed model of democratic autonomy, with its abundant local institutions, are not easy for a centralized system like Damascus to accept. The Syrian regime, without mentioning federation or autonomy, wants to find the middle ground for returning to the 28% of Syrian territory controlled by the SDF without fighting. The status of local law and order forces and the SDF, which is led by the People’s Protection Units, as well as issues such as the recognition of Kurdish and other local languages, education in the mother tongue, border security and sharing of natural resources are all matters that require time to reach agreement on, if ever.

Although the Kurds say they have no red lines on the table, all of these issues are serious enough to be red lines. That is why although the Kurdish delegation went home optimistic, everyone is still cautious. What made the Damascus meeting meaningful was the official hosting of the current co-chair of the Syrian Democratic Council Ilham Ahmed in Damascus, the delegation's meetings with senior-level regime officials such as Deputy Chief of Staff Brig. Gen. Selim Harba and the decision to set up committees for a transition to the negotiations phase.

The Kurds and their local allies feel the only solution is to spread this model to the entire country. But how?

The critical questions now are what are the proponents of autonomy bringing with them when they sit at the table with Damascus, and what do they expect from the latter? Salih Muslim, who in 2011 emerged as the co-chair of the Kurdish Democratic Union Party (PYD) and has played a key role in promoting the autonomy movement in Europe and served for three terms as the PYD co-chair, the maximum allowed by the party’s bylaws, provided Al-Monitor with his assessment of the dialogue with Damascus.

Muslim said none of the parties came to the talks with preconditions, and both gave priority to building confidence between the two sides. Their meetings focused on getting to know each other, probing intentions and trying to understand each other. There was no major issue discussed. As a preliminary step, they decided to set up the committees. The time and scope of the next meeting is not yet known.

The first task of the committees will be to reconcile the democratic autonomy projects and Article 107 of the Syrian Constitution, which refers to local administrations. Muslim denied that the government submitted a 12-item list of demands.

“There is no such thing. Issues like Raqqa, Hasakah and Deir ez-Zor were not even mentioned. There is no confidence between the sides. This is why this meeting was to build confidence. Talking, dialogue and negotiations are different phases. So far, we achieved the first phase as a sign of good will,” he said.

Asked if their model will be acceptable, he replied, “Time will tell. At the moment, the favored option is to win everything with force of guns. If you ask me, the regime’s mentality has not changed. We don’t know what prompted them to invite us. This is the first time this happened. I can’t say that we are discussing this or that now. I am not even sure if confidence is restored. Talks can continue or fail. It depends on the other side. We will find out if the regime is ready or not. We are acting cautiously,” Muslim said.

Asked if the Kurds have red lines, Muslim said, “We don’t have red lines. We have a system. Self-defense forces, democratizations, culture, language and education are part of our projects. The other side, however, is a rigid, inflexible Baathist regime. They have to change. Who knows, it can happen in phases. They understand we have no red lines. Nobody knows if talks will last six months, a year, two years. Democratization can be in phases.”

Concerning optimistic assessments that clashes are no longer an option, Muslim said, “We don’t act on assumptions. We are committed to the interests of our people and decisions of our administration. The regime’s mindset has not changed. If they think they can repeat what they have done at Daraa, that would be a disaster. That is up to them, not us. ”

Foreign actors in Syria are also following the process closely. Everyone wonders about the United States, which supports the SDF. It is known that the Kurdish delegation met with US special envoy Brett McGurk before going to Damascus. It is said that McGurk advised the Kurdish team to first discuss the problems in public services.

There were allegations that the Kurdish delegation went to Damascus with a US green light, yet Muslim stressed, “We didn’t ask anybody’s permission to go to Damascus. The Americans and Russians are of course interested in Syria’s issues and follow developments. But the political decision is ours. We decide what we do. Sure, they may ask what is happening. It is normal to discuss public services. … Postal services, dams and roads are public services. Everybody needs them. We are not trying to wreck those bodies. States’ institutions are public services. The regime’s institutions are soldiers, intelligence services, police and the Baath Party. We always kept them separate. If we succeed in public services, we may make headway on other issues.”

Turkey’s bargaining behind the scenes to deny Kurds' status is not forgotten as a spoiler factor. Muslim said, “Turkey never stopped trying. That doesn’t mean Turkey can do whatever it wants. Turkey doesn’t want a solution in Syria. This crisis has been going on for seven years only because of Turkey. After all this destruction, it is impossible for Ankara to reconcile with Damascus. If they push further, they will lose.”

Asked about the Russian approach, Muslim said, “We hear nothing from the Russian side, who has always been with the regime. Our demands are not exclusively for Kurds but represent all other delegations. We are not talking only of the Kurdish issue but northern Syria. I can’t predict what the Syrian approach will be.”

It is also important to understand how the dialogue was received by the Kurds’ partners. The Syrian Democratic Council's recent declaration that they are "open for dialogue" was received favorably by other groups.

Upon their return, the Kurdish delegation met to assess the Damascus meeting. Muslim said representatives of major communities — including Manbij, Raqqa and Tabqa — participated in this assessment meeting. There were some reservations, but nobody opposed a dialogue outright.