Is Kurdish dream of autonomy coming to an end?

The clouds of doubt over the Kurdish autonomy project in northern Syria have thickened after the Kurds struck a military alliance with Damascus, without getting any assurances on their future political rights. 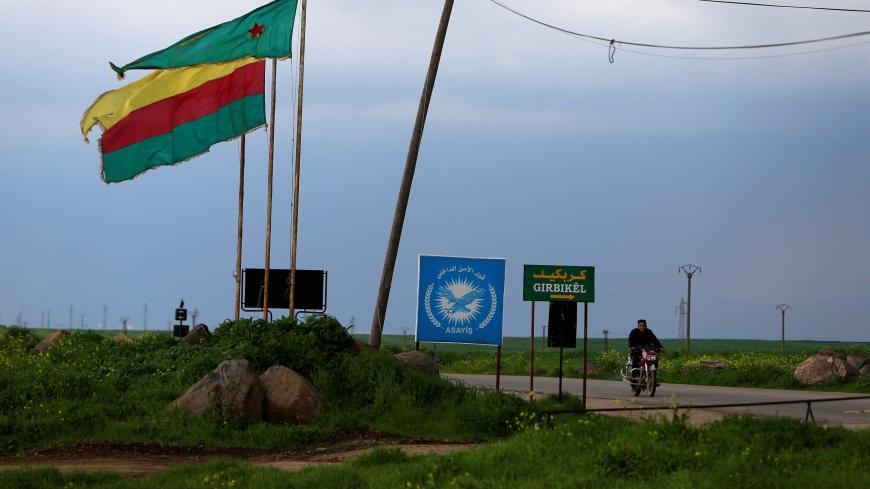 A man rides on a motorbike past the triangular flag of the all-female Kurdish militia, the Women's Protection Units, in the town of Rmeilan in Hasakah province, Syria, March 28, 2019. - REUTERS/Ali Hashisho

Squeezed by Turkey’s military thrust in northeastern Syria and abandoned by the United States, the Kurdish-led Syrian Democratic Forces (SDF) had to make a deal with Damascus, which raises a crucial question: Is this the end of Kurdish dreams of autonomy?

Under the deal, government forces have begun to return to areas they ceded seven years ago, with Damascus making no binding pledge about the future of political and military self-rule bodies that the Kurds have built during the war. The Kurds will be in a much weaker position at any negotiating table now, and might be even forced into a zero-sum outcome politically, once the Syrian state takes the upper hand.

For the Kurds, the US military presence was both a strong bargaining chip in any future talks with Damascus and a deterrent element against military moves by Turkey or the Syrian state. This leverage is now lost, following President Donald Trump’s decisions to leave the field to Turkey, withdraw US forces in the north and leave only a small number of troops at the al-Tanf base near the Jordanian and Iraqi border.

Earlier, Washington had discouraged Kurdish dialogue with Damascus as useless and premature. Still, the Kurds tended to see the US presence as a guarantee. Now, SDF commander Mazlum Abdi, known also as Mazlum Kobane, says Trump did not object to Kurdish contacts with Damascus and Russia in the phone call they had this week. Trump, for his part, tweeted, “Let Syria and Assad protect the Kurds.” How the shifting American position could help the Kurds down the road is hard to predict.

Now that government forces have deployed in Manbij, Tabqa, Tal Tamir and Kobani, the Kurds face a new reality where they are left alone with the government and Russian influence on Damascus gains a new importance for them. The Kurds will likely struggle to make gains without Russia if they have to rely solely on Damascus’ word. The crisis of confidence between the Kurds and the Assad administration has deepened greatly since the Kurdish People’s Protection Units (YPG) allied with the United States against the Islamic State in 2014 and then teamed up with Arab forces under the banner of the SDF to advance as far as Tabqa, Raqqa and Deir ez-Zor.

Damascus had notably hardened its tone against the Kurds before Turkey’s operation, to the point of calling the SDF “separatist terrorists.” And soon after Ankara launched the offensive Oct. 9, Deputy Foreign Minister Faisal Maqdad dismissed the prospect of renewed dialogue with the Kurds, saying, “There won’t be any foothold for the agents of Washington on Syrian territory.”

After the deal, however, the tone quickly changed. Presidential adviser Bouthaina Shaaban said Damascus was ready to assist the Kurds, lauding them as “part and parcel” of the Syrian nation.

Such statements, however, do not necessarily herald sincere negotiations. The recent past offers examples of how Damascus could renege on its word. The terms of cease-fire deals with armed groups in Daraa, eastern Aleppo, eastern Gouta and Quneitra were not honored, even though they did not require any changes in the governance system.

The publicly known framework of the deal with the SDF contains no commitment to a political status for the Kurds. In its official statement on the deal, the de facto Kurdish autonomous administration of north and east Syria said, “The Syrian army has been allowed to deploy along the entire Syria-Turkey border stretch with the aim of liberating the areas occupied by the Turkish state and supporting the SDF against the aggression. The agreement will enable the liberation of Afrin and all other Syrian territories occupied by the Turkish state and its allied gangs.”

Some Kurdish and Arab sources in the region have claimed that the deal also involves understandings to grant the Kurds autonomy in the new constitution, incorporate the SDF into the Syrian military as a “5th Army Corps” and a handover of the oil facilities in Deir ez-Zor to Damascus.

According to Kurdish sources contacted by Al-Monitor, however, negotiations on political issues, including the future of the SDF and local councils, have been left to a later stage. Existing self-rule bodies would continue to function until a settlement is reached. The SDF might be incorporated into the Syrian army if partial autonomy or the federation model proposed by the Kurds is accepted, the sources said, adding that no decision has been made on the handover of oil facilities. Joint military operations on Afrin and Idlib have been discussed, but no final decision has been made. The Kurds had previously made it clear that military collaboration to the west of the Euphrates would require some guarantees on autonomy. This position is said to remain unchanged.

Damascus has remained tight-lipped on such critical issues, but the SDF commander sounded somewhat optimistic, calling the deal “a step toward a political settlement and a constitutional guarantee of the rights of our people.” Ruling out a rash submission to Damascus, he said the current contacts with the regime were “a military negotiation,” to be followed by discussions on political negotiation.

Similarly, Saleh Muslim, the head of foreign relations of the Democratic Union Party (PYD), the political wing of the YPG, told Al-Monitor that constitutional issues would be taken up later. “The deal was sealed at the request of Russia. We’ve always wanted that in order to protect the borders,” he said. “They will not meddle in the administration and the local councils. The deal is about protecting the borders only. Discussions concerning the constitutions will be held in later stages.”

Muslim said the Syrian army has taken positions with a view of halting the advance of the Turkish forces and will stay away from areas east of Tell Abyad and the center and west of Ras al-Ain. In other words, the Syrian army will not engage in fighting with Turkish forces. Should Turkey attempt to expand its control, Russia would step in.

Recalling Russian warnings that all “illegitimate” foreign forces in Syria must leave, Muslim argued that Damascus needs the Kurds as well down the road. “What made this agreement possible was the fear of Turkey occupying and annexing Syrian land. They did not really expect [the offensive]. The Syrian army cannot counter this alone,” he said. “They are now readying for a new process by taking the Kurds on their side."

Fawza Youssef, a senior official in the self-rule administration, argued that the deal did not preclude the autonomy project, confirming that political issues would be discussed later. “The state is defending its borders. We are dealing with a survival issue right now,” she told Al-Monitor. “Our priority now is to stop the aggression against Syria’s unity. This does not mean that we have forfeited our rights and the gains we have achieved thus far; on the contrary, we have taken this step to guarantee them.” She ruled out “a return to pre-2011 times,” stressing that “reimposing the past [system] would be political suicide.”

Youssef added that the Kurds have become more organized and have acquired diplomatic experience. “This will enable us to negotiate and protect our rights. The struggle has not ended. There will be changes in the political realm as well,” she said.

According to Youssef, working in tandem with the Syrian state will bear positively on mutual confidence and future negotiations. Asked about the vision the Kurds would pursue, she said, “Let’s solve our problems on our own. Foreign powers prioritize their own interests at the expense of Syrians. This should not be allowed any more. [The deal] should be utilized as a ground to create a new Syria. We aim at creating a democratic system together with all Syrian peoples and spreading this model to all of Syria. The nation-state cannot resolve the problems. We will wage our struggle through dialogue and democratic means. But we will use our right to self-defense in case of attacks on our being and rights. We will not step back.”

In three previous meetings, held with Russian mediation, government representatives had balked at discussing Kurdish proposals, blocking the way of true negotiations. Now there is a strong factor pushing the two sides toward each other.

Any future bargaining on a political status for the Kurds could be swayed also by an eventual Kurdish decision to join the Syrian army in offensives to take back Idlib and Afrin.

But even if territorial control is secured, the question remains open on whether the Kurds will get what they are hoping for in return. Kurdish representatives want to be optimistic, referring frequently to Russia’s role. Yet getting the Kurds into the constitutional settlement process requires overcoming Turkey’s objections, which is not an easy task for a Russia that maintains the goal of reconciling Ankara and Damascus.

Ankara may be vexed by the Russian move to bring Damascus and the Kurds together, but it keeps the channels with Moscow open, trying to use them to its advantage. Turkey has already managed to block Kurdish participation in the constitution-drafting committee. And slightly more than a week into its military operation, Ankara already believes it has destroyed the autonomy project. Hence, it could condition its military withdrawal from Syria on the denial of political status for the Kurds.

Moreover, an eventual reconciliation between Ankara and Damascus might compel the latter to renege on collaboration with the Kurds. Conversely, should Damascus fail to mend fences with Ankara, it might grant autonomy to the Kurds to avenge Turkey’s support for rebel forces during the war. All scenarios are open for betting.

Nevertheless, after the Syrian army’s entry into predominantly Arab areas such as Raqqa and Deir ez-Zor, the survival chances of the democratic federation of north and east Syria appear rather slim. The unraveling of the already fragile Kurdish-Arab partnership there would strip the Kurds of bargaining leverage for those regions. As a result, their bargaining scope is likely to become limited to Kurdish-majority regions rather than all areas to the east of the Euphrates.