The Iraqi Kurdistan independence referendum continues to make waves in Syria as the country's Kurds believe they can negotiate with the Syrian government to establish a federal state. 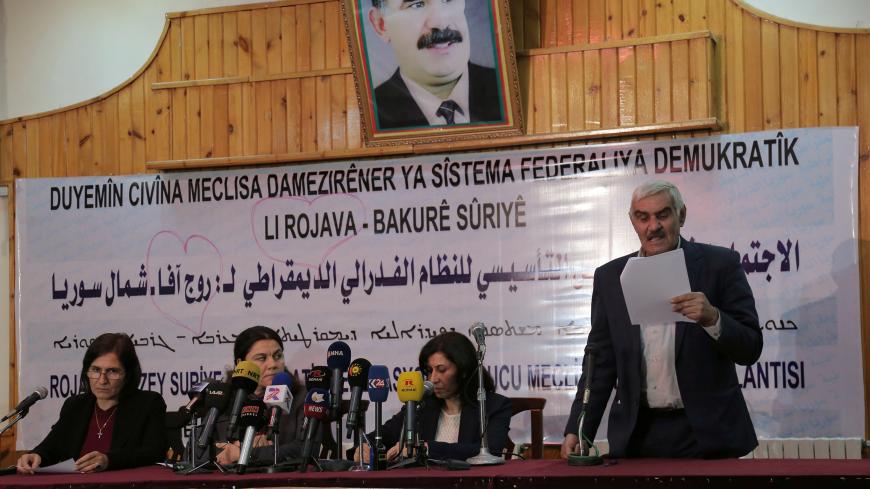 Iraqi Kurdistan's independence referendum has been echoing in Kurdish circles in northern Syria due to nationalistic ties and shared feelings. Kurdish parties are preparing to form a united delegation to negotiate with the Damascus government the formation of a federal state across Syria.

The Democratic Union Party (PYD) considers the statements of Syrian Foreign Minister Walid Moallem regarding the possibility of negotiating a potential Kurdish self-rule as “a progressive step,” despite being overdue.

PYD presidential adviser Sihanouk Dibo told Al-Monitor that the Iraqi Kurdistan independence referendum “should be capitalized on to prevent the reasons that bred it from resurfacing and to spare Syria a similar experience.”

The Kurdistan Region’s calls for an independence referendum stemmed from the weak relationship with the central government of Baghdad and from problems about dividing power and oil revenues from the region, which exports to Turkey independently.

The desire to adopt the federal system as a model for the rule in Syria after 2011 has been growing among some Kurdish parties and components in their strongholds in northeast Syria. This desire intensified when the Syrian government’s forces retreated from the area in November 2012. Following the retreat, Kurdish forces such as the PYD formed the Asayish, while the YPG formed self-defense forces (army and police) and local councils. On March 16-17, 2016, the Kurds and the PYD announced the federal system in northern Syria.

Moallem’s statement on RT TV Sept. 25 strayed from the typical approach of the Baath Party, which believes in the unity of all Syrian territories and a central rule. Still, his statement was in line with the Syrian regime’s ally, Russia, about establishing a federal Syrian state, all the while maintaining the country’s unity.

Perhaps Moallem’s statement may merely be a political game to pressure opposition-backer Turkey, which opposes the self-rule demands, to make political concessions in favor of Damascus and at the expense of the political and military opposition. The statement may also mean that Damascus is testing the waters with Russia and Iran, Syria’s closest allies, regarding a federal state.

Russian’s Deputy Foreign Minister Sergei Ryabkov supported the federal proposal in Syria and said that Russia backs the outcome of the Syrian negotiations, including establishing a federal state.

With Raqqa’s liberation Oct. 20 and the Syrian Democratic Forces (SDF) and Arab-Kurdish alliance announcing that the city would become part of “a decentralized federal Syria,” the PYD and its allies seem to have effectively annexed the province to the federal area and benefited from Russia’s warming up to the idea and from the Syrian regime’s implicit approval of the decentralized rule — or at least its willingness to negotiate. Opposition source Abdulbaset Sieda, a Kurdish-Syrian academic and politician and former president of the Syrian National Council, told Al-Monitor, “The regime will not be the one deciding on the future rule in Syria, but it is trying to give this impression to mark its territory and prove its control.”

Sieda told Al-Monitor that the current suggestions of the Syrian regime regarding a federal state are based on “Russia’s inclinations and the regime’s awareness of the US desire. The regime is trying to be on the same page as its allies, but at the same time, it is working on foiling the project. Will the federal system be administrative, geographic, nationalistic, sectarian or religious? This issue must be discussed after reaching a political solution in Syria, and it would constitute a prelude to forming a constitution drafting committee, which must be based on consensus among all Syrian components.”

The US stance underlines that a federal state decision should be left to Syrians alone. Former deputy spokesperson for the US State Department Mark Toner asserted the US commitment to Syria’s unity and said, “If Syrians agree on a federal system, it is up to them. But the US opposes the establishment of areas under a semi-independent rule threatening Syrian unity. It creates isolated areas or cantons within Syria. The US does not back the federal system in Syria, unless the Syrian people are all for it.”

These cantons constitute 37-40% of Syria’s surface area and are home to 3-4 million citizens from north Syria, including Kurds, Arabs, Turkmens, Syriacs, Assyrians, Circassians and Yazidis, not to mention Christians and Muslims. The cantons also boast key dams, oil fields and wide agricultural stretches.

The self-rule administration wrapped up the local council elections and is getting ready for the Dec. 1 municipal and regional elections. A local council is tasked with governing the services of a village or neighborhood within the province under the federal system model.

According to Dibo, the PYD wants to apply “the geographical federal model rather than the nationalistic one on all of the Syrian territories” and wants to form “four federal states based on geography — the federation of the north, south, coast and desert.”

Dibo said that the delayed declaration of a federation deepened the Syrian crisis due to “the lack of realistic and reasonable solutions,” in reference to the federal system that would save Syria from its divisive reality.

Dibo added, “In light of the gains that were made, the federal state has transitioned from revolutionary legitimacy to constitutional legitimacy. Based on this principle, we will not accept any violations of these gains. Everyone should know that we are not taking advantage of the federation for help, because this is neither fair nor acceptable.” He was referring to any maneuver or objection from the central rule or any other Syrian party. Dibo said that there is no intention to engage in new battles with any Syrian party.

It is still unclear how far the Syrian regime might go in approving a decentralized federal rule along 185,000 square kilometers (71,430 square miles), which is Syria’s surface area, with the regime controling half the country. Ali Haidar, the minister of state for national reconciliation affairs, said in a statement, “Raqqa’s future is non-negotiable, except as part of a final political model for the Syrian state.”

The Damascus government is still delaying the discussion of the federal rule until a final agreement is reached. The US stance is vague because it is focusing on eliminating the Islamic State in Iraq and Syria.

Meanwhile, the key political actors in Syria — Russia, Turkey and Iran — are singing their own tune regarding the federal state. Sieda argued, “Although Russia and Iran currently see eye to eye in Syria — which was obvious in their de-escalation agreement — each country will have its own interests and inclinations in the long run. Russia is interested in the form of a federal state, but in terms of content, it would rather focus on the military security system that can guarantee its interests in Syria and the region ultimately. Iran does not want to open the federation discussion for fear of inspiring the Kurdish population at home.”

He added, “Turkey believes the Syrian regime will keep using the Kurdish card for pressure to perpetuate Syrian President Bashar al-Assad’s past policy, which he still tries to use when needed.”

Will Turkey take advantage of its army’s entry to Idlib to halt the federation project and besiege Afrin canton near Aleppo, in covert coordination with Damascus? And how will the Kurds react then? Syria is on the brink of a new kind of conflict that might include strange bedfellows.