Jordan has been tasked with overseeing which groups fighting in Syria are designated as terrorist organizations, but its mission is complicated by alliances in the region. 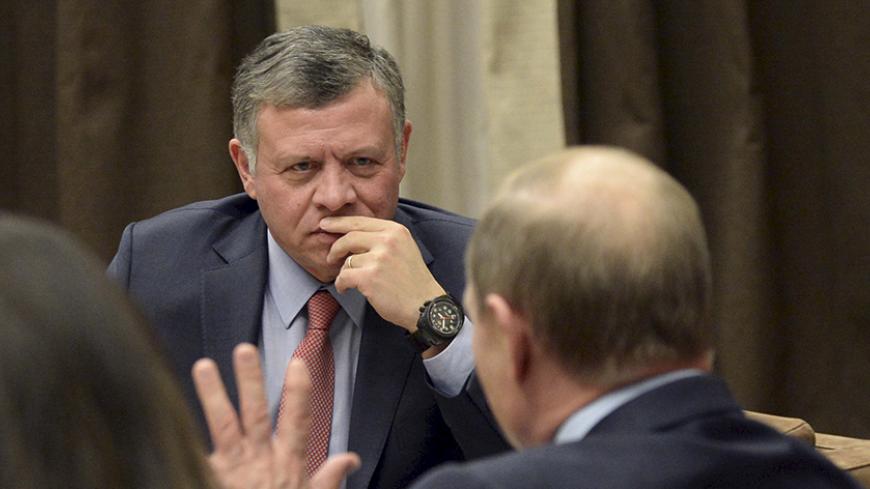 Jordan's task of overseeing the development of a list of organizations fighting in Syria that are actually terrorist groups is a job fraught with potential headaches for the kingdom. The assignment by the International Syria Support Group is part of efforts to launch negotiations between the Syrian regime and the so-called moderate opposition early next year. Announced by Russia’s Foreign Minister Sergey Lavrov Nov. 15, the move is also tied to Article 6 of the support group's Oct. 30 Vienna Communique, which states, “Daesh [Islamic State, IS], and other terrorist groups, as designated by the UN Security Council, and further, as agreed by the participants, must be defeated.”

The Jordan Times quoted Minister of State for Media Affairs and Communications Mohammad Momani as saying, “Selecting Jordan for this task illustrates the international community’s recognition of Jordan’s capabilities and the efficiency of its military and security apparatuses.” Mohammad Abu Rumman, an expert on Islamist groups, said, however, the assignment might put Amman in a bind, given its special relations with Saudi Arabia and other Gulf countries, including the United Arab Emirates, its intelligence contacts with the United States and Europe, and its particular knowledge of the groups in Syria, including their financers and other supporters. In addition to US financial and military assistance, it relies on grants from Saudi Arabia, the UntAE and Kuwait.

Abu Rumman told Al-Monitor, “This is a complicated issue that could compromise Jordan since adding more groups to the list will provoke their backers and threaten the kingdom’s stability.” The support group has already agreed to include IS and Jabhat al-Nusra on the list. Among the groups that could possibly be added are Ahrar al-Sham, al-Sham Front and Jaish al-Fatah (Army of Conquest).

“Some of these Islamist groups fall in a gray area. Some will argue that they are radical, while others will claim they are moderate,” said Abu Rumman. This, he added, is part of the challenge facing Jordan. The survey group's designations could affect alliances among the anti-regime groups — for instance, Jaish al-Fatah's affiliation with the already designated Jabhat al-Nusra — and weaken the opposition on the ground, especially if foreign backers stop financing some of them, Abu Rumman noted.

It is not clear how Amman will manage its mission amid the conflicting interests and goals among the regional and international players involved in the Syrian conflict. According to the newspaper Asharq al-Awsat, Jordan will soon host a meeting to determine “radical organizations in Syria.” It reported that at least seven more groups will be added to the terrorist list. Political analyst Orieb al-Rintawi told Al-Monitor that one criteria Jordan will use to designate radical groups is “their acceptance or rejection of a political process” in Syria.

Rintawi warned, “The Saudis must not exclude or marginalize groups that are not on close terms with Riyadh.” What the Saudis do stands to have some effect on Jordan's task. “The conference could give recognition to groups that might end up on the Jordanian list,” he said.

There are unconfirmed reports that Amman is already being pressured by Turkey and Saudi Arabia. The Dubai-based Gulf News reported Nov. 23 that the two countries “have convinced Jordan to cross off two of their proxies [Jaish al-Islam and Ahrar al-Sham] from the list of Syria’s rebel groups banned from joining the political process.” The paper also reported, “The Russians wanted to exclude Jaish al-Islam and Ahrar al-Sham, while Saudi Arabia insisted both are moderate and legitimate opposition groups.”

Commenting on a Nov. 24 meeting between King Abdullah and Russian President Vladimir Putin in Sochi, Lavrov told a press meeting that "it is very difficult to go on with the Vienna Process as long as there is no single list of terrorist organizations to be exempt from cease-fire arrangements.”

Further complicating the mission, on Nov. 23 the head of the Syrian National Coalition, Khaled Khoja, had called on Jabhat al-Nusra to cut its ties with al-Qaeda and “return to the wide umbrella of the Syrian revolution.” It is unclear how Jordan will react if Jabhat al-Nusra heeds Khoja’s call. According to Abu Rumman, the question also remains whether Jordan’s mission will be limited to only designating terror groups opposed to the Syrian regime or extend to organizations fighting on its side, including the Islamic Revolutionary Guard Corps, the Jerusalem Brigade, Hezbollah and the National Defense Forces.

Aref al-Shahwan, a military expert, said that Jordan’s task could also be self-serving. “Jordan has vested national security interests in southern Syria and would like to maintain the status quo there for as long as possible,” he told Al-Monitor. “Jordan has managed to keep Jabhat al-Nusra from taking over border posts between the kingdom and Syria, and its intelligence efforts have managed to keep IS away from Jordanian borders,” Shahwan said. Coordinating with Russia, which is carrying out airstrikes in Syria, will ensure that the status of the southern front does not change adversely in regard to Jordanian interests, he remarked.

Political commentator Fahd al-Khitan described Jordan’s mission as “impossible.” In a Nov. 17 article for Al Ghad, he wrote, “Jordan’s success is linked to the willingness of all players in Syria to move beyond their narrow interests and commit to a political solution while refraining from arming both sides.” So far, such conditions have proven to be elusive.