Tillerson: US could boost cooperation with Russia on Syria

The potential for deeper US-Russian cooperation in Syria will be a key topic of discussion when US President Donald Trump meets Russian President Vladimir Putin on Friday. 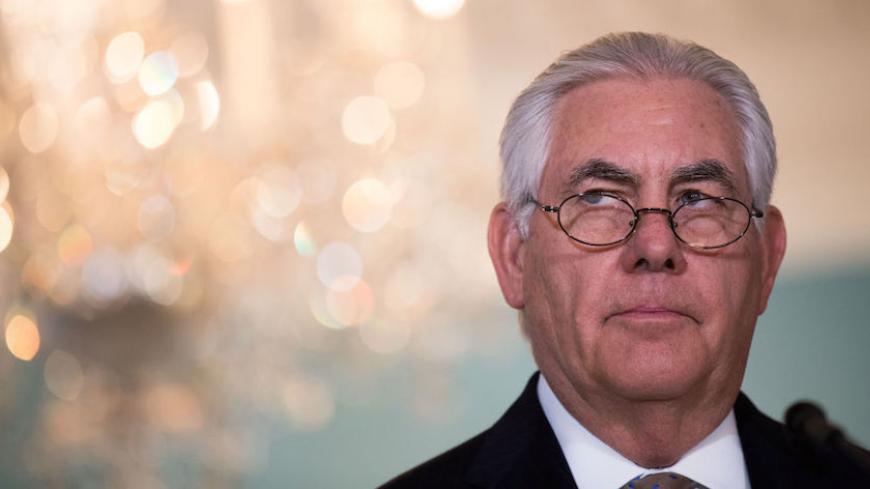 US Secretary of State Rex Tillerson delivers a statement regarding Qatar at the State Department, June 9, 2017 in Washington, DC. - GETTY/Drew Angerer

WASHINGTON — The United States is prepared to deepen coordination with Russia to try to stabilize Syria, and that will be a key topic of discussion when US President Donald Trump meets Russian President Vladimir Putin in Hamburg, Germany, on Friday, Secretary of State Rex Tillerson says.

“The United States and Russia certainly have unresolved differences on a number of issues, but we have the potential to appropriately coordinate in Syria in order to produce stability and serve our mutual security interests,” Tillerson said Wednesday in a lengthy statement before departing to join Trump at the G-20 meeting in Hamburg.

Trump and Putin are expected to meet for about an hour Friday afternoon on the sidelines of the G-20 summit for the first time since Trump came into office. Plans for the much-anticipated meeting have drawn intense scrutiny amid Trump’s reluctance to embrace the US intelligence community’s assessment that the Kremlin interfered in the 2016 US presidential election to boost him and hurt his rival. Whether any Trump campaign associates colluded with the Russian campaign is the subject of multiple investigations by Congress, the FBI and a Justice Department special counsel. Amid the controversy, Syria may ironically turn out to be one of the “safer’’ issues for the two leaders to discuss.

Tillerson cited recent progress between the US and Russian militaries to reduce the possibilities of conflict in their operations in Syria and to resolve misunderstandings that have emerged as a reason for increased US willingness to explore increased coordination.

“The United States and Russia have already achieved progress in establishing de-confliction zones in Syria that have prevented mutual collateral damage,” Tillerson said. “Our military leaders have communicated clearly with one another to make sure no accidents occur between our two countries in the Syrian theater.”

“This cooperation over de-confliction zones process is evidence that our two nations are capable of further progress,” Tillerson said. “The United States is prepared to explore the possibility of establishing with Russia joint mechanisms for ensuring stability, including no-fly zones, on-the-ground cease-fire observers, and coordinated delivery of humanitarian assistance. If our two countries work together to establish stability on the ground, it will lay a foundation for progress on the settlement of Syria's political future.”

Washington’s expressed willingness to consider establishing joint mechanisms with Moscow to conduct Syria stability operations comes amid accelerating gains in the US-backed coalition’s operations to seize territory from the so-called Islamic State (IS) in Mosul, Iraq, and Raqqa, Syria, and intensified planning for “the day after” IS is defeated.

Trump has indicated to subordinates that he wants to finish off IS and get out of Syria, regional experts who consult with the administration tell Al-Monitor.

“Trump is against escalation, at least when he calls Tillerson and [Secretary of Defense Jim] Mattis to ask about the recent shoot-downs,” a US analyst, speaking not for attribution, told Al-Monitor, referring to incidents in May and June when the United States shot down a Syrian regime war plane near Tabqa, fired on Iranian-backed militias advancing on a US garrison near al-Tanf and shot down an Iranian drone. “His guidelines are kill IS and leave with as few troops as possible. Don’t own Syria.”

Tillerson’s statement Wednesday reflected the Trump administration’s decision to prioritize the fight against IS and to stabilize Syria instead of pushing for regime change against Syrian President Bashar al-Assad and confronting Iran in Syria, as some hawks have urged.

“Actors in Syria must remember that our fight is with ISIS,” Tillerson said. “We call upon all parties, including the Syrian government and its allies, Syrian opposition forces, and Coalition forces carrying out the battle to defeat ISIS, to avoid conflict with one another and adhere to agreed geographical boundaries for military de-confliction and protocols for de-escalation.”

But Tillerson said Russia has special responsibilities to deliver the Syrian regime’s compliance with any cease-fire plan. “The United States believes Russia, as a guarantor of the Assad regime and an early entrant into the Syrian conflict, has a responsibility to ensure that the needs of the Syrian people are met and that no faction in Syria illegitimately retakes or occupies areas liberated from ISIS' or other terrorist groups' control,” he said. “Russia also has an obligation to prevent any further use of chemical weapons of any kind by the Assad regime.”

While Russia will welcome further cooperation with the United States on Syria, the Trump administration may find Moscow’s leverage on Assad and his Iranian allies is more limited than it hopes, said Russia expert Michael Kofman.

“There is a strong and unfortunate consistency between the [Trump] administration's approach to the North Korea problem, thinking that China will deliver something it most certainly can't and won’t, and what's going on in Syria,” Kofman, with the Kennan Institute, told Al-Monitor. “There is a widely held and completely baseless belief that Russia is in a position to shape, curtail and otherwise restrict Iranian influence and would do so if properly rewarded.”

“That is not the case, and this administration is going down the same path as the previous one with notions that Russia can control local or regional actors and, more importantly, would even consider trading a partnership with Iran in exchange for what so far appears to be 'nothing' in terms of what the US president can feasibly deliver,” Kofman said. “One of the long poles in US policy for Syria seems to be containing Iran, and this will result in a familiar trajectory of completely unreasonable expectations placed on Russia, followed by disappointment and recriminations.”

Secretary of Defense Jim Mattis, speaking to reporters en route to Europe last week, said the US military was focused on fighting IS and would avoid getting entangled in Syria’s civil war. He alluded to increasingly detailed discussions with the Russians to try to avoid skirmishes between Russian- and Iranian-backed pro-Assad forces and US-led coalition-backed forces on the ground in Syria.

“How do you avoid mission creep?” Mattis told reporters June 27 on his plane to Germany for a NATO meeting. “You stay focused on where the enemy is. And you set up any number of coordination efforts if you're getting near converging forces … either Assad regime or Russian, and we have to assume there are Iranian either officers or Lebanese Hezbollah elements with them.”

He said, “So what we do is we keep moving against ISIS. We de-conflict with the Russians; it's a very active de-confliction line. … And you just make certain there's open communication: ‘We're here, you're there, we know where you're at.’”

He said, “So we just refuse to get drawn in to a fight there in the Syria civil war. We try to end that one through diplomatic engagement.”

With the US-led coalition and Syrian Democratic Forces now focused on liberating Raqqa, pro-Assad forces may intensify their push to try to take Deir ez-Zor, Mattis said. Field commanders using established "de-confliction" lines will help determine when one side or the other needs to shift their allies “10 kilometers south here, five kilometers north there,” to avoid skirmishes.

“It's probably not going to look that neat,” Mattis said of the increasingly complex map of forces in the Euphrates River Valley. “You know, it'll be based on where does the river bend here and … which side of the river is a town on there. … So, it may look a little more squiggly.”

Following the Trump/Putin discussions in Hamburg on Friday, talks between the Syrian regime and opposition are due to resume in Geneva on Monday, UN Syria envoy Staffan de Mistura said.

In the meantime, talks this week in Astana, Kazakhstan, on implementing an agreement for four Syria "de-escalation" zones, ended July 5 without a signed agreement. The Astana parties, led by Russia, Turkey and Iran, are due to meet there again in August. Stuart Jones, the US acting assistant secretary of state for Near East affairs, attended the Astana meeting as an observer.

De Mistura said it is not surprising that getting agreement on how to reduce violence in the more than 6-year-old Syrian conflict may require more time.

“I think you should not be disappointed,” de Mistura told journalists at a press conference in Astana on Wednesday. “Every step in this discussion, even in Astana, like we have in Geneva, are small steps but are important ones. … What is required now is the implementation, and as you know, as usual, the devil is in the details. So let’s not downgrade what we have seen today, which is some progress, but I understand there was more expectations.”

“Without a political process, even de-escalation is not sustainable,” he said.

by Murielle KASPRZAK and Joseph SCHMID | AFP | May 26, 2022
END_OF_DOCUMENT_TOKEN_TO_BE_REPLACED