US touts success of Syria cease-fire negotiated with Russia

Despite recent sanctions on Russia, the Donald Trump administration sees a path forward for cooperation with Moscow in Syria. 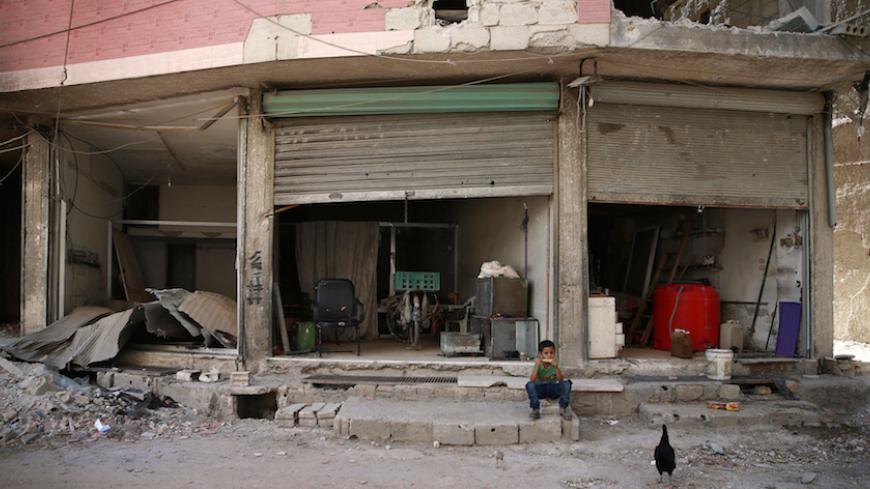 A boy eats corn as he sits in front of a shop in Ain Tarma in the eastern Damascus suburb of Ghouta, July 19, 2017. - REUTERS/Bassam Khabieh

WASHINGTON — Even as President Donald Trump reluctantly signed new Russia sanctions into law this month, US officials expressed growing confidence that cooperation with Moscow on a Syria cease-fire is working. They believe the success of a deal in southwest Syria, negotiated by the United States, Russia and Jordan and announced last month, could prove a model for broader US-Russia cooperation on an interim stabilization plan after the defeat of the Islamic State (IS).

“Despite all of our tensions with Russia, we also look for areas where we have to find a way to work together, and I think Syria exemplifies that,” Brett McGurk, the US envoy in the coalition to defeat IS, told journalists at the State Department last week.

As the US-backed Syrian Democratic Forces (SDF) have ramped up their campaign to take the IS stronghold of Raqqa, US negotiations with Russia have produced agreement on “deconfliction” maps delineating the location of forces aligned with Russia and the United States so they do not come into conflict, McGurk said.

One such boundary near Tabqa, south of Raqqa, “has held extremely well,” McGurk said. “This is now in place. Our military personnel speak with the Russians every day, and we, of course, have diplomatic consultations on issues like this far less frequently but whenever we need to.”

A far more extensively negotiated cease-fire for southwest Syria, which borders US allies Israel and Jordan, has been an even more critical test. That deal was announced July 11 by Jordan, the United States and Russia as Trump and Russian President Vladimir Putin met in Hamburg, Germany, following negotiations spearheaded on the US side by McGurk and Deputy Assistant Secretary of State and Syria envoy Michael Ratney. The Russian delegation was led by Putin’s special Syria envoy, Alexander Lavrentiev. The negotiations got underway shortly after Trump took office, and have largely taken place in Amman, Jordan.

“Importantly, as you know, we concluded … a cease-fire in the southwest with Jordan and Russia,” McGurk said. “So we’re well into the third week of it now, and the results have been quite promising thus far. The fighting has largely stopped.”

“There’s a couple reasons for this. Unlike some other cease-fires that have been tried in Syria, this cease-fire was a result of months of negotiation with the Jordanians [and] the Russians, who were there representing effectively the Syrian regime,” McGurk said. “Painstaking negotiation, what we call the line of contact, meter by meter … so everybody understood where they could go and where they could not go.”

“We’re now seeing civilians beginning to return to this area, which is very promising, and beginning to see land mines being removed as the fighting has stopped,” McGurk said. “So we’re working very hard to make sure that that cease-fire remains in effect, and so far it’s promising.”

The success of the southwest Syria cease-fire could pave the way for a broader political solution, diplomats said.

“I believe the south is critical,” a diplomat who works on Syria, speaking not for attribution, told Al-Monitor. “If it succeeds, it may unlock the road to a political solution.”

US confidence in Russia is growing because Moscow has apparently demonstrated that it has leverage to persuade Iranian-backed forces to abide by the recent arrangements, Syria expert Charles Lister said.

“I think we have heard indications publicly from American officials that they feel like they are getting more from the Russians than they ever have before,” Lister, with the Middle East Institute, told Al-Monitor. “And they are under the impression for the first time that Russia might have the necessary leverage to constrain Iran’s position post-settlement.”

“That has always been the big concern: Does Russia have the leverage?” Lister said. “But Iran is playing the long game. They realize they have won.”

“The big condition being imposed on the Iranians — to withdraw non-Syrian militiamen — … is not much of a defeat,” Lister added.

Israeli officials have criticized the southwest Syria cease-fire and are seeking a broader international commitment to limit Iran’s influence in Syria. US officials say Israel has been extensively consulted on the negotiations, and note that the consultations continue.

"We remain fully committed to the cease-fire arrangement in southwest Syria that was negotiated with Jordan and Russia. We are also committed to regular consultations with our partners in the region, including Israel,” Edgar Vasquez, a State Department spokesman, told Al-Monitor. “These consultations have been extensive, and they are ongoing. We are encouraged by the process and the cease-fire to date, which is saving lives and allowing families to return to their homes. We also agree that Iran must end its destabilizing activities in the region, and that all foreign fighters, including those associated with Iran, must ultimately leave Syria."

Meanwhile, the implication for the Syrian opposition is that the United States and many of its regional backers are prepared to live with Bashar al-Assad staying in power for the near term, the Middle East Institute’s Lister said. There is talk of Syrian High Negotiations Committee leader Riyad Hijab resigning, he added, as opposition groups come under pressure from Saudi Arabia and Turkey to accept the new terms.

“The US is either accepting or admitting they don’t have the necessary leverage to make things any better,” Lister said. “I think it certainly represents fatigue … and an acceptance from the top level that we are only concerned with IS and maybe al-Qaeda.”

“From the American policy standpoint … we are negotiating an interim settlement [in which] Assad stays,” Lister said.

However, the fact that the United States and Europe have made clear they are not prepared to fund postwar reconstruction in areas controlled by Assad may give them some leverage regarding Assad’s fate, particularly with Russia.

“The international community is not going to come to the aid of Syria until there is a credible political horizon that can lead to a credible transition in Damascus,” McGurk said. “That is the reality.”

McGurk sketched out what the Trump administration Syria policy review has apparently decided on as the way forward.

“Defeat ISIS, get de-escalation arrangements in place, quiet down the overall situation, which sets the conditions for an ultimate … political settlement of the civil war,” McGurk said. “And at the end of that process … we do not envision Bashar al-Assad being in control of Syria from Damascus.”