US calls on Russia to cease Idlib fight amid terror strikes

The Pentagon called for Russia to halt its offensive into Syria’s Idlib province as the United States launched strikes into the contested region aimed at al-Qaeda leaders. 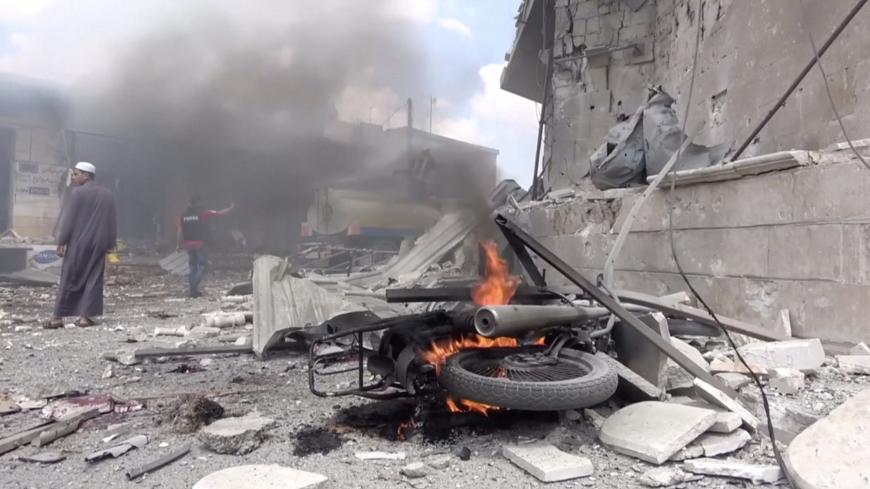 A motorbike burns after an airstrike in this screen grab taken from a social media video said to be taken in Idlib, Syria on July 16, 2019. - White Helmets/social media via REUTERS

The Pentagon is warning Russia to stop bombing to support the Syrian regime’s offensive in Syria’s contested Idlib province as the United States launched strikes deep into the region aimed at al-Qaeda leaders this weekend.

The US Central Command targeted a jihadi camp Saturday, reportedly killing 40 militants just hours before a Russian-backed unilateral cease-fire took effect; this was the second such US attack in northwest Syria this summer. But as the United States moves against the militants' presence, the Defense Department says Russia has repeatedly violated its 2018 deescalation deal with Turkey by targeting infrastructure in the region.

“Not even a year has passed since Turkey and Russia signed their Idlib Memorandum of Understanding, and the Russians are already providing support to the Regime’s offensive campaign to retake parts of Idlib, bombing critical civilian infrastructure and creating a humanitarian catastrophe,” Michael Mulroy, the Pentagon’s deputy assistant secretary for the Middle East, said in a statement provided to Al-Monitor. “We continue to call upon the Syrians and Russians to cease their offensive into Idlib and return to the agreement they made with the Turkish government in October of last year.”

Mulroy has also warned against the potential of mass and collateral damage in a possible Russian-led siege against Idlib, similar to what occurred in Aleppo three years ago. The Pentagon sees Russian support to the regime of President Bashar al-Assad “as the center of its approach” to dislodge US military power in the Middle East at a low cost, Mulroy added; part of this approach is Russia having a naval facility in the Syrian city of Tartus and a separate coastal air base.

The ongoing Idlib campaign has also gotten in the way of the Donald Trump administration’s effort to defeat al-Qaeda’s Syrian arm. The Pentagon’s ability to launch attacks against the group is limited in the province, where Russian fighter jets control the air. The area, which has not been fully recaptured by forces loyal to Assad, is seen by intelligence officials as a possible launching pad for external attacks.

The two strikes against alleged al-Qaeda leaders this summer come as the United States has been frustrated by Russia’s failure to share intelligence on terror targets in Idlib province, where experts believe members of the militant group’s Shura Council have deepened their influence.

But experts indicate that the Kremlin, which entered the Syrian fight under the rationale of fighting the Islamic State, has favored carpet bombing instead of counterterrorism tactics to handle opposition and militant forces.

“Our main focus has been on hitting veterans,” said Charles Lister, a senior fellow at the Middle East Institute. “That’s what I assume we’re trying to ask the Russians to focus more on, but I have no idea how we’re trying to do that because that’s not part of the Russian playbook.”

“We’re basically talking two different languages,” Lister added, noting that Russian Spetsnaz and Syrian factions of Hezbollah were “fighting hand in glove” earlier in the Syrian war, which Moscow entered in 2015 during the battle for the city of Aleppo.

The inability of both sides to find common ground on the Idlib fight helped derail talks to end the war that included bilateral meetings between the United States and Russia in Sochi, New York and Jerusalem that ended earlier this summer. In Israel, both nations agreed that Iranian-backed forces should leave Syria, but struck no official deal to that effect.

But despite the recent Russian cease-fire decision, experts say opposition forces remaining in Idlib could find themselves backed into a corner once again. The Syrian regime had previously broken a cease-fire deal struck at the G-20 in July 2017 over Syria’s southwest, which the pro-Assad forces began bombing a year later.

“A lot of the forces that were defeated made deals and decamped for Idlib,” said Michael Kofman, director of the Russia studies program at the CNA think tank. “Now they have nowhere to go from there. A Russian-led operation is just going to pulverize them into oblivion, which is most likely how this ends.” The Pentagon has also accused Russia of backing Assad regime efforts to stop the flow of United Nations-provided humanitarian assistance to the remote Rukban camp on Syria’s southwest border with Jordan, near a US military garrison at al-Tanf.

The Pentagon’s warnings come amid fears that Russia is courting US allies in the region, such as Egypt, Israel, Iraq and the Gulf countries, which have been reported to as having had interest in the S-400 air defense system.

The US government is required to sanction most nations that purchase major Russian weapons systems.

The Trump administration has so far declined to implement sanctions on Turkey after it started taking delivery of the $2.5 billion S-400 package in July, though the Pentagon pulled Ankara out of the F-35 program over the deal.

“Russia is a transactional partner seeking its own benefit; it thrives in chaos, and therefore, does not seek the best interests of its transactional partners,” said Mulroy, the Pentagon official. “We urge our Middle Eastern partners to see Russia for the unreliable partner that it is.”