Intense scrutiny and investigations of possible ties between Trump associates and Russia may complicate prospects for US-Russian cooperation in the fight against IS and in Syria. It may happen anyway. 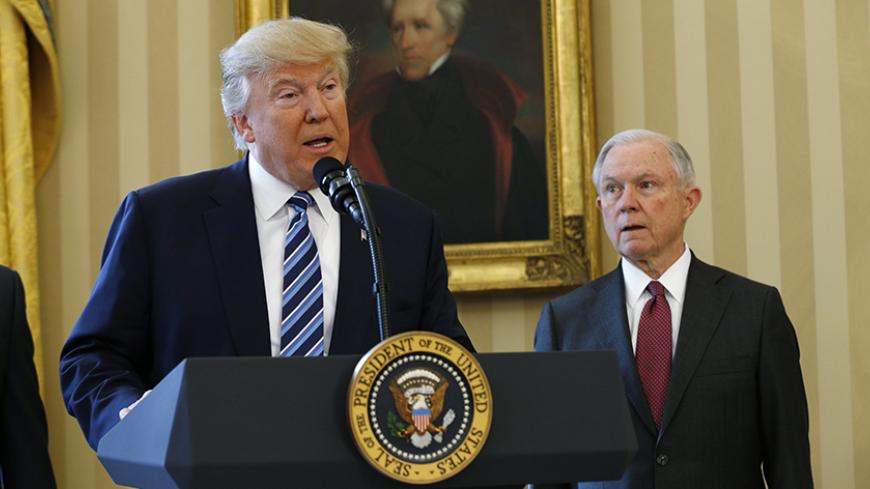 WASHINGTON — As media reports, congressional committees and the FBI scrutinize possible ties between Trump associates and the Russian government during the 2016 US election campaign, are prospects for US-Russia cooperation in the fight against the so-called Islamic State (IS) and in Syria on hold? The US domestic political environment may be constraining and slowing Trump’s ability to maneuver, but there are signs both sides are still interested in pursuing such cooperation, diplomatic observers said.

“Both sides are interested in exploring cooperating in Syria, but there certainly are political constraints, there is no question,” Paul Saunders, the executive director of the Center for the National Interest, told Al-Monitor March 6.

“On the US side, obviously we have our political environment here, and the Russians are well aware of the environment here,” said Saunders, who served as a senior Russia adviser at the State Department during the George W. Bush administration. “And that has led Russian officials to wonder what the Trump administration may be in a position to do.”

“I think it is clear there is this political constraint,” Saunders said. “At the same time, I would say the president [Trump] knows how to act in ways to change the narrative.”

Kremlin spokesman Dmitri Peskov on March 6 blamed US “hysteria” about Russia for inhibiting discussions on improved bilateral ties. And March 7 discussions between the top military officers from the United States, Russia and Turkey held in Antalya, Turkey, were officially about the need to “de-conflict” military operations between the three nations and their Syrian proxies in the increasingly crowded battlespace near Manbij and al-Bab in northern Syria, officials said.

US, Russia hold second round of high-level military contacts

The Department of Defense News reporter traveling with Dunford reported March 7 that in their meeting, US Marine Corps Gen. Joseph Dunford, the chairman of the Joint Chiefs of Staff, Russian army Gen. Valery Gerasimov and Turkish army Gen. Hulusi Akar “are looking to enhance senior-level communications and operational deconfliction of military operations in Syria.” The report also said, “It is a measure of the success that forces are having in countering the Islamic State of Iraq and Syria that the conversation is necessary, officials said, adding that operations in Manbij and Bab in northern Syria have created a crowded battlespace.”

The Antalya discussions mark the second meeting between Dunford and Gerasimov since Trump took office, following their Feb. 16 meeting in Baku, Azerbaijan. They come a week after US Secretary of Defense Jim Mattis delivered recommendations on a strategy to defeat IS to the White House, where they were reported to be under further interagency consultation.

Despite the resumption of high-level US-Russia military consultations, which were broken off after Russia’s invasion of the Crimean Peninsula in 2014, the Kremlin expressed regret at what it called US media hysteria about alleged Russia interference in the 2016 US presidential election and scrutiny of possible ties with the Trump campaign, and said it is damaging for US-Russian relations.

"The only thing I can tell you is that all this … hysteria in official Washington and hysteria in American media, this is doing lots of harm to the future of our bilateral relations,” Kremlin spokesman Peskov told CNN March 6.

"For us, we are interested in having a predictable partner … for the dialogue," Peskov said. "And now when we unfortunately don't have a comfortable environment for our dialogue, of course it is a great pity.”

US President Donald Trump, taking to Twitter on March 7, blamed the alleged weakness of his predecessor for Russian aggressiveness and the deterioration in US-Russian ties.

Russia is aware the US political environment is making it harder for Trump to make a deal with Russia, but there are signs both sides are still interested in cooperating in Syria and against IS, said Michael Kofman, a Russia expert at the Kennan Institute.

“I suspect Russian expectations have been moderated substantially on how quickly this [Trump] administration can move … to cooperate with them in Syria,” Kofman told Al-Monitor.

“And no doubt they suspect that any arrangement with the US will not come quickly,” Kofman said. “They were likely unrealistic in thinking that, within a month or two, the Trump administration would already be taking steps to set up some kind of collaboration on Syria. The politics in the US are shaping up such that it is not really possible for the administration right now.”

“But it is clear in my view they [the Trump administration] still intend to do it,” Kofman said. “It strikes me that they want to expand military effort versus [IS] in a way that leverages US special forces and air power. But what they don’t want is a large conventional footprint. So they would probably look to Russia to increase its air campaign and aim it at [IS].”

Russians could signal US by increasing their targeting of IS

In recent weeks, Syrian regime forces with Russian support are themselves striking to take more territory from IS — for instance, near al-Bab — “if anything, to cut off the Turks,” Kofman said.

“The problem is not coordination,” Kofman said. “The problem is a public deal. Because what Russia would like is a deal, meaning military-to-military collaboration.”

Kofman predicted we are likely to see more US-Russian military-to-military coordination in Syria in the coming weeks. “Eventually they will slow-roll it and get it to a place where they try to do some kind of meeting with the Russians. But as I said, it is probably going to happen a lot slower than the Russians” had hoped.

With so many Marines and senior military officers in top levels of the US national security structure — retired four-star Marine Gen. Mattis as secretary of defense, four-star Marine Gen. Dunford as chairman of the Joint Chiefs of Staff, Army three-star Lt. Gen. H.R. McMaster as national security adviser and so on, and the State Department so far fairly sidelined in the Trump administration — the ability to make decisions on such cooperation may not require wide interagency deliberations, said a source speaking not for attribution.

Saunders agrees there are creative ways the United States and Russia could increase cooperation even in this fraught political environment, particularly using military-to-military “de-confliction” channels. If Russia started increasing its targeting of IS in Syria versus the moderate rebels, that would be noticed by the United States, he suggested.

“The Russian government could change the targeting of its airstrikes in Syria to [target IS],” Saunders said. “To some degree, that would be sufficient to be noticed in the US. And certainly, that could create an opening for Washington to talk to them.“

“The border between ‘de-confliction’ and coordination is fuzzy and probably porous,” Saunders added. “It is a blurry distinction. That kind of [military-to-military] contact can be more frequent and can be at a higher level. There can be more information shared by one side or the other. It could be less a warning away from particular areas and more about some kind of division of labor.”

“There are a number of things that could happen in that context that one would not necessarily notice until things started happening on the ground, particularly in a slow and gradual way might not be noticed immediately. … If there was some kind of cooperation in Syria that was viewed as a success by the [US] administration, then I think that could help to facilitate contacts on other issues, no question,” Saunders said.

Does he see signs that is already happening?

“I think it is too early to tell,” Saunders said.

Senior European officials, in Washington last week for consultations with the Trump administration, said they share the Trump administration’s desire to have better relations with Russia. But they counseled against the United States trying to strike a “grand bargain” with Russia, but rather deal with each issue (Syria, Ukraine, cyber, arms control, etc.) in a more compartmentalized fashion.

“Our message is pretty clear to the US administration: As Europeans, good relations with Russia are needed,” one of the two senior European officials, speaking not for attribution, told journalists in Washington March 2. “Engagement is needed. But we need to be realistic. The notion of a transactional approach, a grand bargain, doesn’t fly. We need to address each issue on its own merit.”

“If Europe and the US [work together], we could achieve good results, on Ukraine, Syria, on cyberdefense,” the European official said. “We leave this town pretty optimistic; we will cooperate again on these issues.”

“It is too early to see the contours of [the Trump administration’s] possible Russia policy,” a second senior European official said. “Its review is not complete. We cannot be certain of what the policy of the US will look like.”

Of a possible US-Russia deal, “how the deal is oriented is the whole thing,” the second senior European official said. “Syria to Ukraine. We want to engage the Russians within the confines of those files.”

If there are, say, six contentious issues to negotiate with Russia, if the United States or Europe tries to strike a grand bargain and “deal with all of them at once, you will get only concessions on three,” he warned.

Russia sees the United States and Europe “in enemy terms,” the second senior European official said. “They are more critical than you can imagine. … The Russians never thought there was a credible, great opportunity of entering a completely new relationship” with the Trump administration. “However, they would have taken it if it came their way. They play with it, as of now.”

On Syria, “It is not clear what the [Trump] administration policy will be,” the first senior European diplomat said. “We made the point that [fighting] terrorism is our priority. If we want good, sustainable results, we need a political transition, a political solution. Otherwise, the terrorism groups will continue. … We need to push for a [Syria] political solution. … We need to re-energize this process [to find] a compromise.”