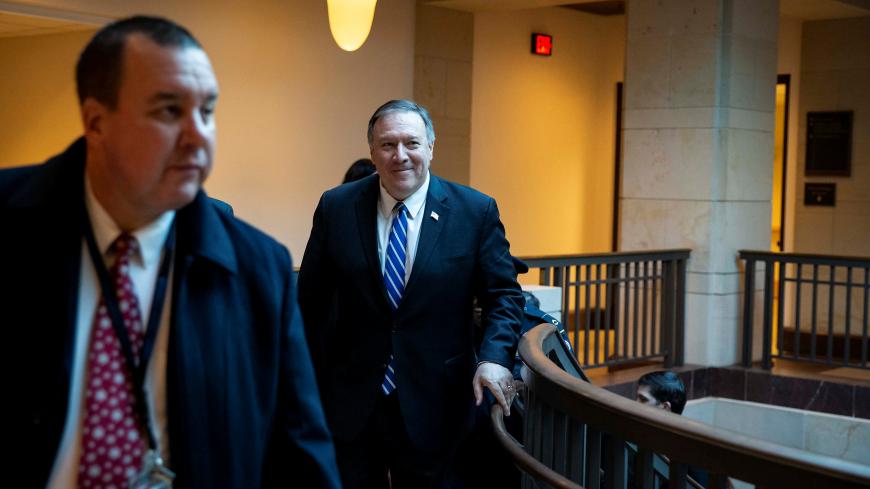 US Secretary of State Mike Pompeo departs following a briefing on developments with Iran after attacks by Iran on US forces in Iraq, at the US Capitol in Washington, Jan. 8, 2020. - REUTERS/Al Drago

The Donald Trump administration abruptly canceled four classified Iran briefings on Capitol Hill this week and Secretary of State Mike Pompeo refused the House’s request that he speak at a public hearing on the assassination of Iranian Maj. Gen. Qasem Soleimani.

Brian Hook, Trump’s special coordinator for Iran, and Assistant Secretary of State for Near Eastern Affairs David Schenker were initially scheduled to brief the Republican-controlled Senate Foreign Relations Committee on Iran on Wednesday, but abruptly canceled. Politico reported the same day that the State Department also canceled another classified briefing in the Democratic-held House on embassy security, as required by law every month. The embassy security briefing was initially expected to focus on Burundi, but staffers had requested a broader briefing on the impact the Soleimani strike would have on embassy security. Meanwhile, CNN reported that the Pentagon canceled a briefing that was scheduled today for the House Armed Services Committee, while the FBI canceled an Iran counterintelligence briefing for lawmakers.

The abrupt cancellations come after Pompeo rebuffed the House Foreign Affairs Committee’s request that he testify on Iran and the Soleimani strike during a public hearing Tuesday, citing time constraints. Toward the end of the hearing — which featured no one from the Trump administration — Chairman Eliot Engel, D-N.Y., noted, “Secretary Pompeo doesn’t have the time to come to this committee, but while we’re holding this hearing, he did have time to go on Fox News.”

Why it matters: Pompeo, Defense Secretary Mark Esper and CIA Director Gina Haspel did hold classified briefings for all lawmakers last week. That was not enough to dissuade the House from passing a war powers resolution directing Trump to disengage from unauthorized hostilities against Iran. Politico also reported Wednesday that the US intelligence community has asked Congress not to hold its annual public hearings on worldwide threats — where Iran features prominently — for fear of angering Trump, as occurred last year when intelligence officials "presented findings that diverged from the president’s statements."

Furthermore, Wednesday’s classified briefings were also set to occur the same day as a partisan House vote to transfer the articles of impeachment to the Senate, setting the stage for Trump’s trial to begin today. On Tuesday night, the House Intelligence Committee also released a trove of documents implicating Trump’s associates in the alleged surveillance of Maria Yovanovitch, when she was the US ambassador to Ukraine.

What’s next: Sen. Tim Kaine, D-Va., announced earlier this week that he has enough Republican votes to pass an Iran war powers resolution in the Senate — mirroring the House vote last week. House Majority Leader Steny Hoyer, D-Md., has also committed for there to be a vote on a measure to defund offensive military action against Iran and a repeal of the 2002 Iraq war authorization, which the Trump administration used as the legal justification for the Soleimani strike, at the end of the month.