With no details to back up their claims, the Donald Trump administration asserts that the targeted killing of Quds Force commander Qasem Soleimani was to disrupt imminent attacks against US interests. 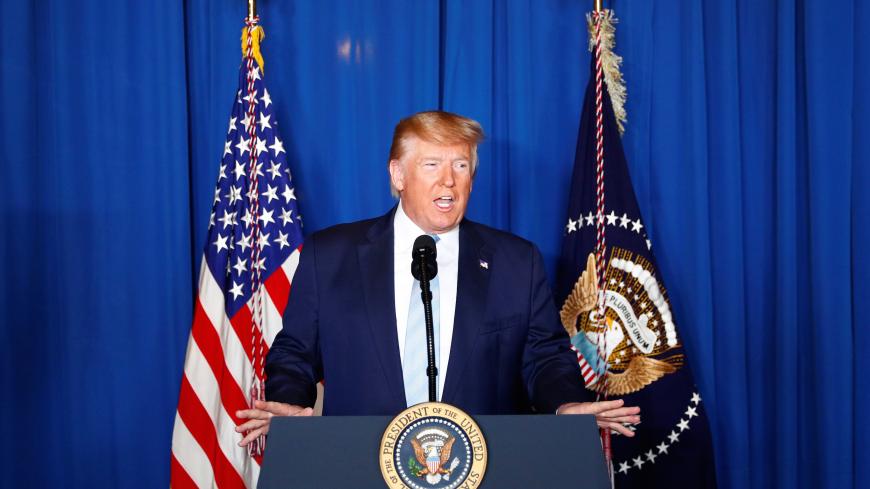 In his first remarks on the US killing of Iran’s Qasem Soleimani 24 hours earlier, President Donald Trump today asserted the action was intended to avert a war, not start one. But Trump, like others in his administration, provided scant details to back up their claim that the United States had acted to disrupt an imminent attack on US facilities and diplomatic personnel in the region that the Islamic Revolutionary Guards Corps Quds Force chief was allegedly planning when he was killed in a precision US drone strike at Baghdad International Airport along with an Iraqi militia leader.

“Soleimani was plotting imminent and sinister attacks on American diplomats and military personnel, but we caught him in the act and terminated him,” Trump said in scripted remarks at his resort in Palm Beach, Florida, before taking no questions.

“We took action last night to stop a war,” Trump continued. “We did not take action to start a war. I have deep respect for the Iranian people. … We do not seek regime change. However, the Iranian regime's aggression in the region, including the use of proxy fighters to destabilize its neighbors, must end, and it must end now.”

Congressional leaders briefed on the intelligence continued to raise questions and concerns about whether the Trump administration's Iran strategy was leading the nation into another unwanted war in the Middle East, while US allies who received a flurry of calls from Secretary of State Mike Pompeo today called on all sides for restraint and urged de-escalation.

Rep. Adam Schiff, D-Calif., the chairman of the House Intelligence panel, said he was briefed today on the intelligence on the alleged threat posed by Soleimani, but still had questions and deep concerns about the administration’s “maximum pressure” strategy and the subsequent steady rise in tensions bringing the United States and Iran closer to conflict.

“If the administration had some broad strategic objective in mind or was acting in concert with our allies and making progress toward modifying Iran’s belligerent behavior, Americans could have confidence that this latest US strike would make us safer,” Schiff said in a statement today. “But if there is some broad strategy at work, the administration has yet to articulate it. More ominously, it has yet to show that ‘maximum pressure’ is doing anything but prompting more dangerous and deadly responses from Iran and increasing the likelihood of full-fledged war.”

“Why was the decision to kill Soleimani made now, when prior administrations of both parties considered the risk of escalation to outweigh the benefits?” Schiff’s questions continued. “What is the broader strategic plan, and why hasn’t the administration been able to persuade our allies of its merits? How does the administration intend to de-escalate and avoid a destructive conflict with Iran that is not in our interests?”

France, like the UK, Canada and Germany, expressed alarm at the escalating tensions between the United States and Iran in Iraq and urged all sides to exercise restraint.

“For France and all of its partners, every effort must now be made to avoid a further escalation of tensions and to facilitate de-escalation in order to preserve the stability of Iraq and the region as a whole,” the French Ministry of Foreign Affairs said in a readout of a call between French Foreign Minister Jean-Yves Le Drian and Pompeo today.

“In the current situation, France calls on all the parties to show restraint and on Iran to avoid taking any measures liable to aggravate regional instability or lead to a serious nuclear proliferation crisis,” the readout continued.

“We will just call for de-escalation; this is what we need now,” France’s Ambassador to the UN Nicolas de Riviere told reporters at a stakeout today. “We need de-escalation. We need stability in the region, and we will really encourage everybody to work on de-escalation.”

“We call on all sides to exercise restraint and pursue de-escalation,” Canada’s Foreign Minister Francois-Philippe Champagne said in a statement. “Our goal is and remains a united and stable Iraq.”

“We have always recognized the aggressive threat posed by the Iranian Quds Force led by Qasem Soleimani,” British Foreign Secretary Dominic Raab said in a statement, following a call with Pompeo. “Following his death, we urge all parties to de-escalate. Further conflict is in none of our interests.”

Israeli Prime Minister Benjamin Netanyahu, cutting short his trip to Greece Thursday to handle any potential blowback from the US action, seemed to hint that he had been briefed on the US action.

"Just as Israel has the right to self-defense, the United States has exactly the same right. Qasem Soleimani is responsible for the deaths of American citizens and other innocents, and he was planning more attacks,” he said. "Israel stands with the United States in its righteous struggle for peace, security and self-defense."

“This was the United States disrupting a plot their leadership was well aware of,” National  Security Advisor Robert C. O’Brien told journalists on a White House press call this evening. “They know what they were up to…If they choose to escalate, that would be a very poor choice for the Iranian regime.”

The alternate path, O’Brien continued, would be for Iran to sit down with Trump, give up its nuclear program, stop its proxy wars in the Middle East, stop taking hostages, and behave like a normal nation. “In that case, Iran has a fabulous future,” O’Brien said.