War-averse Trump looks for off ramp with Iran 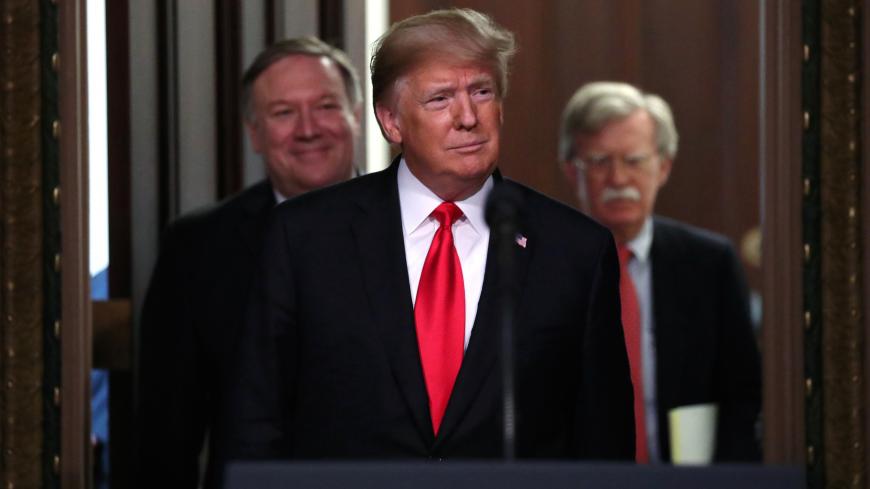 US President Donald Trump arrives flanked by Secretary of State Mike Pompeo (L) and US national security adviser John Bolton (R) for the annual meeting of the Interagency Task Force to Monitor and Combat Trafficking in Persons annual meeting at the White House in Washington, US, Oct. 11, 2018. - REUTERS/Jonathan Ernst

WASHINGTON — Echoing his predecessor Barack Obama even as he mocked him, President Donald Trump said today that he changed his mind at the last minute about taking retaliatory military strikes on three Iran sites deemed connected to the Iranian downing of an unmanned US surveillance drone June 20.

“We were cocked and loaded to retaliate last night on three different sights when I asked, how many will die. 150 people, sir, was the answer from a General. 10 minutes before the strike I stopped it,” Trump tweeted today.

“I am in no hurry. Our military is rebuilt. … Sanctions are biting. … Iran can never have nuclear weapons. …” he continued.

Trump has said numerous times and former advisers attest that he is averse to getting drawn into another military conflict in the Middle East. But it is not clear that he has the team in place to effectively advise him how to get to the table with Iran or the limits of the maximum pressure campaign that has no serious direct diplomatic engagement.

“The president really wants to avoid a war,” former Trump national security council official Fred Fleitz told Al-Monitor June 20. “It looked like an attack was certain around 7 p.m. (June 20, Washington, DC, time). Maybe there will be a de-escalation now.”

“There is lack of clarity in US objectives on Iran,” Brett McGurk, Trump’s former counter-Islamic State envoy, wrote on Twitter today. McGurk added, “What are we trying to achieve via maximum pressure? The president states limited objectives (nuclear deal only); his advisers state maximalist objectives.”

“Trump’s ordered pause should be used to ask … hard questions about the strategy, its aims and the mounting risks should the policy remain unchanged,” McGurk continued, adding, “Last night is the first time Trump took Iran policy off autopilot, and that’s good.”

House Intelligence Committee chairman Adam Schiff, D-Calif., said Trump should get credit for pausing to think through his response.

“I don’t think the people should be jumping at the president’s throat for wanting to think this through and make sure that neither side miscalculates and we don’t inadvertently end up in a war with Iran,” Schiff told CNN today.

“So, I think this has to be an international response; we need to de-escalate the situation, and it’s also very important for the administration to understand those who are egging on the president that there is not congressional authorization to go to war with Iran,” Schiff said.

"You cannot negotiate with somebody who has a knife in his hand putting the knife under your throat," Ravanchi said, adding, "That cannot be acceptable to anybody. Any reasonable person cannot accept to have negotiations with somebody who is threatening you."

Trump may have some internal administration support for an effort to pursue diplomatic negotiations with Iran but is also being undermined by skeptics on his own side, said former George W. Bush administration State Department Iran adviser Suzanne Maloney.

“Iran engages with Washington when it's in their interest to do so and when they see an opportunity that they can exploit,” Maloney, now with the Brookings Institution, told Al-Monitor. “So if and as those conditions exist, direct bilateral diplomacy is not just possible but likely inevitable.”

“Beyond that, I do think the State [Department] crowd wants some kind of talks,” Maloney continued. “I'm not convinced that they have invested much work in devising a framework for talks, but I do think there is a constituency for diplomacy beyond Trump himself.”

“On the other hand, there is some evidence that this administration is so dysfunctional in terms of process and that there are so many ideological opponents of diplomacy that anything other than 'more of the same' is doomed,” she said.