Iraq’s potential vote to expel US forces for assassinating Maj, Gen. Qasem Soleimani could spell trouble for the campaign against the Islamic State. 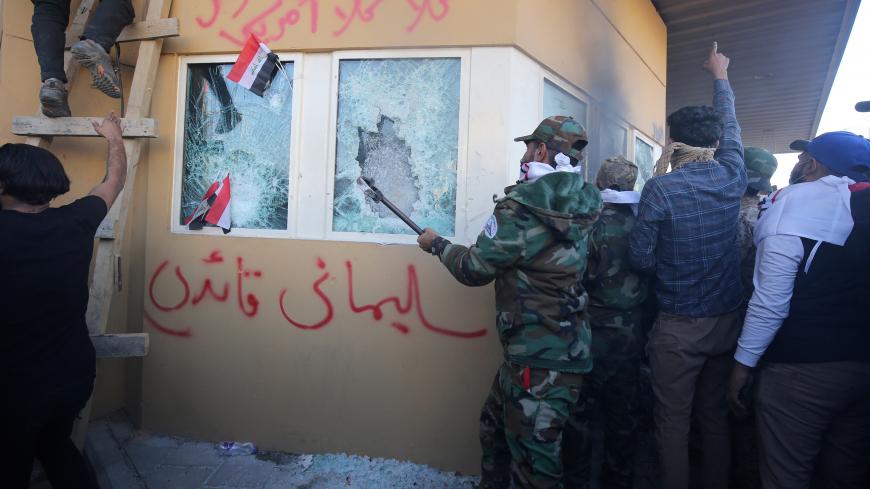 Iraqis, including members of Iran-backed Popular Mobilization Units, smash the bulletproof glass of the US Embassy's windows in Baghdad after breaching the outer wall of the diplomatic mission on Dec. 31, 2019, to vent their anger over weekend air strikes that killed pro-Iran fighters in western Iraq.

The emergency session could lead to a longtime goal of Iran’s proxies in Iraq: the expulsion of US forces from Iraq, potentially jeopardizing the campaign against the remnants of the Islamic State.

“We would certainly be very disappointed if there was some sort of adverse decision by the Iraqi parliament — the Council of Representatives — with respect to our continued ability to assist the people of Iraq,” national security adviser Robert O’Brien told Al-Monitor today.

O’Brien pointed to the fact that some of the protesters who have swarmed Baghdad in recent months to demand a complete government overhaul celebrated Soleimani’s assassination yesterday. Iran-backed militias targeted by the United States have abducted several activists leading the demonstrations, but the protesters have also taken aim at American influence in Iraq.

“Certainly, there’s some high tensions after what’s happened, but it looks like those people going out in Tahrir Square to demonstrate in favor of the United States and to celebrate a bit of a new lease on freedom is a very positive sign for Iraq,” O’Brien told Al-Monitor.

O’Brien insisted that the White House had factored in the potential expulsion of US troops from Iraq before striking the Islamic Revolutionary Guard Corps' Quds Force commander and Muhandis, but critics contend that the assassinations have made it harder for Iraqi politicians to justify the presence of American troops in the country.

“I think their preference, including some that may be relatively sympathetic to Iran, would have been and would be for the US to stay,” Robert Malley, the former White House coordinator for the Middle East under President Barack Obama, told Al-Monitor. “But the political dynamics are going to be much stronger and it’s going to be increasingly difficult for Iraqi political leaders to defend the continued presence of a country that has flouted their sovereignty.”

Malley argued that if US troops were forced to withdraw “in a precipitous manner, as [they] would in this instance, it would hurt the fight against the [Islamic State].”

Undeterred, the Donald Trump administration is doubling down on its policy of punishing pro-Iran partisans in Iraq, declaring a key Tehran-backed militia a terrorist group today. The terrorist designation targets Asaib Ahl al-Haq, a key Iran-backed militia involved in storming the US Embassy in Baghdad earlier this week.

Washington had already sanctioned the group’s leader, Qais al-Khazali, last month for shooting protesters critical of Tehran’s grip on Baghdad. But today’s terrorist designation implicates the 14 Asaib Ahl al-Haq members sitting in parliament, who could vote on removing US forces.

“They hated us before and always favored a vote to expel the US from Iraq,” Iraq analyst Kirk Sowell told Al-Monitor. “Sanctions work best against the cosmopolitan, and these guys are anything but global jetsetters.”

Still, Sowell noted that the vote to expel US forces “has a better chance now than ever before” — not necessarily because of the Soleimani killing but because of the Muhandis assassination in the same strike.

“The killing of Muhandis is for Iraqis a much bigger deal, right there on the outskirts of Baghdad,” said Sowell. “Even aside from the vote, it will be hard for the US to maintain its train and equip program there.”

Meanwhile, the White House must also contend with legislators in the United States.

Numerous Democratic lawmakers have questioned the legality of the strike on Soleimani as Congress has not authorized military action against Iran. However, O’Brien argued that the strike was legal under the 2002 military authorization that allowed President George W. Bush to invade Iraq.

House Democrats had unsuccessfully sought to repeal the 2002 military authorization as part of a defense authorization bill Trump signed into law last month while adding a provision that would defund any offensive military action against Iran.

But Armed Services Committee Chairman Adam Smith, D-Wash., ultimately yielded to the White House and Senate Republicans, keeping the 2002 authorization on the books.

Ali Mamouri contributed to this report