Washington is letting sanctions waivers for countries that import Iranian oil expire as it tries to make Iran quit the 2015 nuclear deal before a UN arms embargo is lifted next year as part of the agreement. 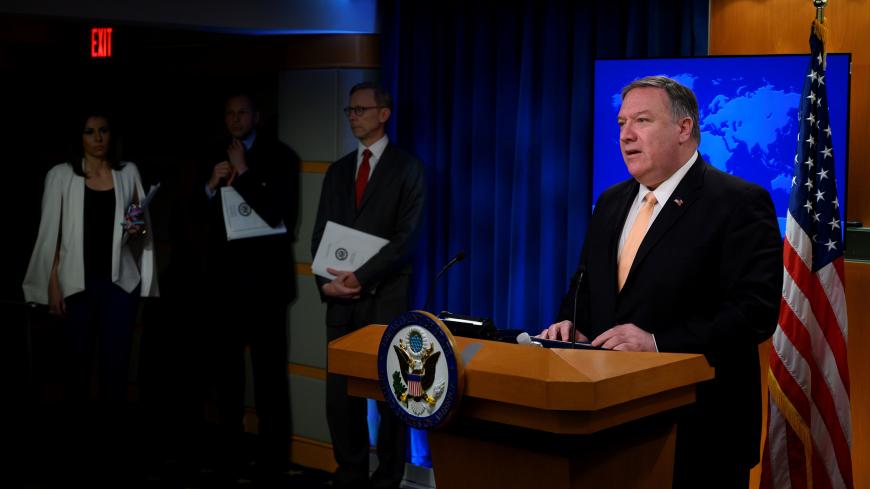 US Secretary of State Mike Pompeo speaks during a press conference at the US Department of State in Washington, DC, April 22, 2019. - ANDREW CABALLERO-REYNOLDS/AFP/Getty Images

WASHINGTON — The Donald Trump administration will not renew sanctions waivers next month for eight countries to continue imports of Iranian oil, it announced today, in a move key American allies interpreted as an effort to get Iran to quit the 2015 nuclear deal that the United States withdrew from last year.

“The goal remains simple: to deprive the outlaw regime of the funds it has used to destabilize the Middle East,” Secretary of State Mike Pompeo told journalists at the State Department today.

But top European allies see the latest step in the Trump administration’s maximum pressure campaign as an increasingly undisguised effort to push Iran to default on the nuclear deal — and thus to expand the so far narrow coalition the Trump administration has mustered to isolate it, comprising mostly just the United States, Saudi Arabia, United Arab Emirates and Israel.

“I think the [US administration’s] goal is to have a worldwide coalition against Iran, and to do that, they push Iran to default” on the nuclear deal, said a European diplomat speaking not for attribution. “Until now it is failing, totally.”

“If regime change is the [US administration's] policy, I think it will fail as well, because the pressure at some stage … instead of weakening the hard-liners, it will just have … as a result the moderates vanishing,” the diplomat added.

The Trump administration feels under time pressure to have the Joint Comprehensive Plan of Action (JCPOA) collapse before the expiration in October 2020 of a provision of the UN Security Council resolution that enshrines the deal that would enable Iran to purchase conventional arms, said Ali Vaez, Iran director at the International Crisis Group.

“My sense is that this is primarily motivated by the fact that maximum pressure has produced minimum results, and the clock is ticking,” Vaez told Al-Monitor. “The administration wants to do everything in its power to kill the deal before the October 2020 lifting of the UN arms embargo.”

Pompeo was vague about whether the goal of the increased pressure from zeroing out Iran oil imports was to get Iran to the table to try to negotiate a broader deal that would address issues the Trump administration said were not solved by the JCPOA. Those issues include Iran’s continued testing of ballistic missiles and its support for regional proxies like Hezbollah.

“If they’re prepared to come to the table and negotiate those things to get to that outcome, fantastic,” Pompeo said in response to a question about the goal today. “If not, the campaign with which we’ve been engaged since … the president’s decision to withdraw from the JCPOA, the campaign will continue. And we built that enormous coalition to work on this. … Gulf state partners, Israel, lots of countries that are working alongside us to achieve these objectives.”

The Significant Reduction Exceptions (SREs) granted to eight Iran oil importers last November expire on May 1 and will not be renewed, Pompeo said. Three of the eight nations that received 180-day SRE waivers last fall — Greece, Italy and Taiwan — had already brought their Iran oil imports to zero. But the top two Iran oil importers, China and India, as well as Turkey, South Korea and Japan, have not.

Turkey’s Foreign Minister Mevlut Cavusoglu blasted the US move, saying it will hurt the Iranian people.

“The US decision to end sanctions waivers on Iran oil imports will not serve regional peace and stability, yet will harm Iranian people,” Cavusoglu wrote on Twitter. “Turkey rejects unilateral sanctions and impositions on how to conduct relations with neighbors.”

Former US Iran sanctions official and nuclear negotiator Richard Nephew said the Trump administration’s decision not to reissue the waivers was not surprising, but could generate a backlash from top Iran oil consumers.

“I think we are coming to a real break point with China, India and Turkey,” Nephew, now with Columbia University, told Al-Monitor.

Though Pompeo announced the decision today, Nephew said he understood that national security adviser John Bolton had pressed not to reissue the waivers, while some at the State Department had argued against it.

“The Bolton crew won clearly, no matter how State is spinning it,” Nephew said.

Separately, the Trump administration last month granted Iraq a second 90-day waiver on imports of Iranian electricity after a previous waiver for Iraq expired on March 19.

The Trump administration was expected to grant a similar exemption for Afghanistan to continue energy imports from Iran, a US official said. “The Iraq and Afghanistan [exemption] processes are different,” the US official, speaking not for attribution, told Al-Monitor. “Their waivers come from slightly different legal provisions."

He said, “The problem is that electricity and gas are not fungible; they can’t buy them from elsewhere.”

“In the next few weeks, the Kingdom will be consulting closely with other producing countries and key oil consuming nations to ensure a well-balanced and stable oil market, for the benefits of producers and consumers as well as the stability,” Al-Falih said in a statement sent to journalists by the Saudi Embassy today.

Trump said the Saudis and the OPEC cartel would make up for Iranian oil the US move would take off the market.

“Saudi Arabia and others in OPEC will more than make up the Oil Flow difference in our now Full Sanctions on Iranian Oil,” Trump tweeted today.

Trump also warned Iran not to listen to former Secretary of State John Kerry, in a move some former US administration officials interpreted as reflecting growing anxiety by Iran deal opponents that Iran would continue to try to wait out the Trump administration until the next US election in 2020, and as some Democratic presidential candidates have said they would reenter the deal.