The UN Security Council is not keen on extending the Iran arms embargo despite US threats to instate snapback sanctions. 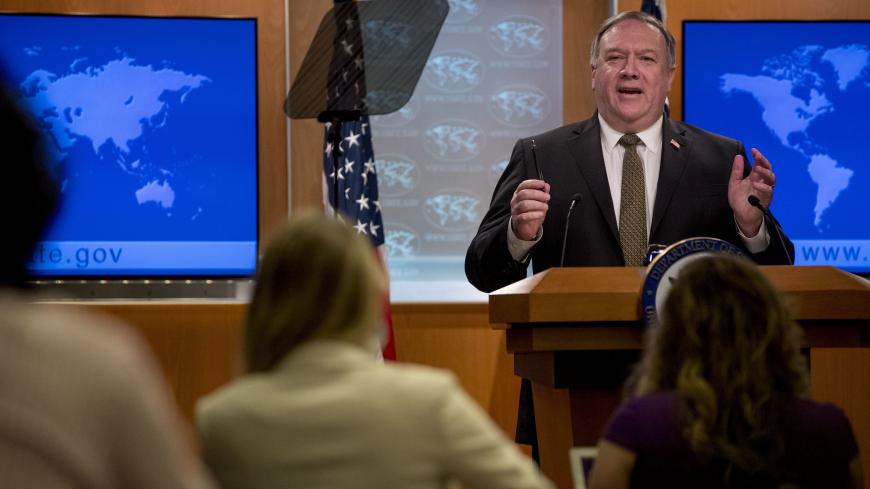 Secretary of State Mike Pompeo speaks during a news conference at the State Department in Washington, June 10, 2020. - ANDREW HARNIK/POOL/AFP via Getty Images

Secretary of State Mike Pompeo called on the United Nations Security Council today to extend the conventional arms embargo on Iran indefinitely, only to face several harsh rebukes from allies and adversaries alike.

While American allies in the Middle East have started to line up behind US threats to snap back multilateral sanctions on Iran should the UN refuse to extend the embargo, the Security Council nonetheless appeared unmoved by Pompeo’s arguments at today’s virtual meeting.

“From Israel to the Gulf, countries in the Middle East — who are most exposed to Iran’s predations — are speaking with a single voice: Extend the arms embargo,” said Pompeo. “The council has a responsibility to listen to them. The United States’ overwhelming preference is to work with this council to extend the arms embargo to protect human life, to protect our national security and to protect yours.”

The arms embargo is currently set to expire in October as the first sunset provision under the 2015 Iran nuclear deal, formally known as the Joint Comprehensive Plan of Action (JCPOA). Iran has said that China and Russia have both expressed interest in selling it combat aircraft once the embargo expires.

Accordingly, Beijing and Moscow have indicated that they will veto any US effort to extend the arms embargo. But it’s unclear whether Washington even has enough Security Council votes to advance its resolution in the first place.

“It is very unfortunate that the United States left the JCPOA and by doing this leaving, actually violating international law because the JCPOA is enshrined in a binding [UN] resolution,” said the German ambassador to the UN, Christoph Heusgen.

Ironically, Pompeo has cited US participation in the JCPOA to argue that Washington has the right to pursue snapback sanctions on Iran under the Security Council resolution in question. However, it remains unclear whether the United States has the legal authority to pursue snapback sanctions under the resolution given its 2018 withdrawal from the accord and reimposition of crippling unilateral sanctions on Iran.

“Having quit the JCPOA, the US is no longer a participant and has no right to trigger snapback at the Security Council,” said China’s envoy to the UN, Zhang Jun.

The UN resolution lists the United States as a JCPOA participant. However, it also states that the United States “will refrain from re-introducing or re-imposing the sanctions … that it has ceased applying under this JCPOA, without prejudice to the dispute resolution process.”

Zhang urged the United States “to stop its illegal unilateral sanctions” and to “return to the right track of overseeing the JCPOA” as well as its underlying UN resolution.

UN Secretary-General Antonio Guterres wrote in a report on JCPOA implementation this month that he regrets “the withdrawal of the United States of America from the plan in May 2018, as well as the steps taken by the Islamic Republic of Iran since July 2019 to cease performing its nuclear-related commitments under the plan.”

“I call upon all member states to avoid provocative rhetoric and actions that may have a further negative impact on regional stability,” wrote Guterres.

Germany’s Heusgen and other Security Council representatives echoed similar sentiments throughout the meeting. Since the US withdrawal, Iran has tripled its stockpile of low-enriched uranium past the limits laid out in the JCPOA.

Brian Hook, the State Department’s Iran policy coordinator, took Pompeo’s place in the middle of the three-hour long meeting. Hook recently returned from a tour of the Middle East to get US allies on the same page with regard to extending the arms embargo.

After meeting with Hook, Israeli Prime Minister Benjamin Netanyahu came out in favor of snapback sanctions on Iran today. Hook also visited the United Arab Emirates, Bahrain and Saudi Arabia over the weekend, all of which endorsed extending the arms embargo on Iran.